DeKalb Police are investigating the death of a pedestrian that occurred on Jan. 1.

The incident occurred near the intersection of Lawrenceville Highway and Fellowship Road around 4 p.m. The pedestrian has been identified as Charles Pilgram, 68.

The driver who hit Pilgram said he was traveling west on Lawrenceville Highway in his pickup truck when he saw another vehicle come to a stop.

The driver, “said that he looked at [the other] vehicle trying to figure out what was going on, and when he looked back at the road in front of him he struck [Pilgram].”

The driver said he never saw Pilgram before he hit him.

Here is a diagram of the incident contained in the police report: 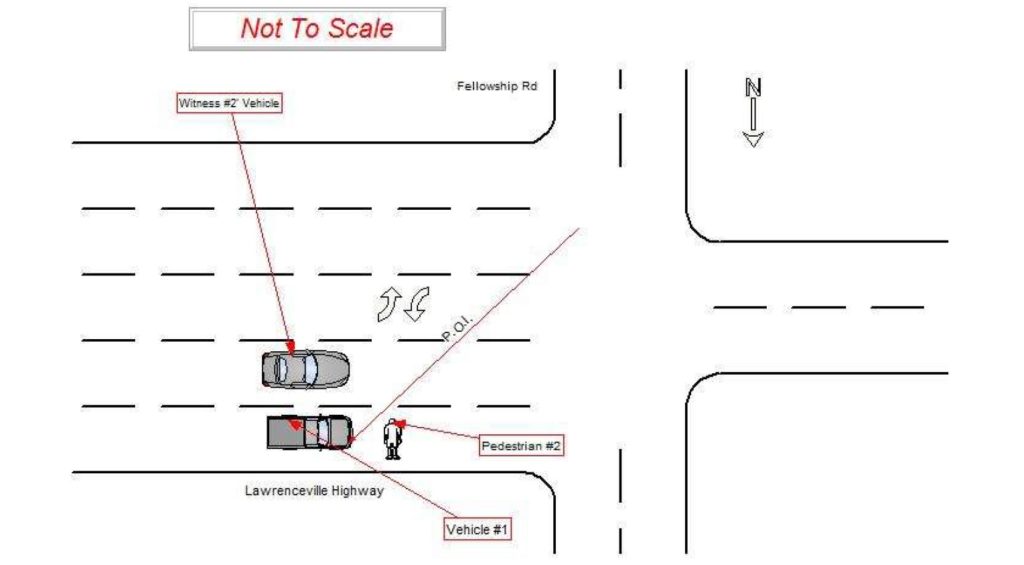 One of the witnesses told police that he was traveling west in his vehicle on Lawrenceville Highway when he saw Pilgram enter the road in front of him. He said he had to swerve out of the way to avoid hitting Pilgram. After swerving, he looked in his rear-view mirror and saw the driver of the other vehicle hit Pilgram. Another witness who was also traveling west on Lawrenceville Highway saw Pilgram and was able to come to a stop before hitting him.

The driver of the pickup was listed as the “suspect at fault” in the police report. A police spokesperson initially said the department doesn’t anticipate there being any charges against the driver, but later said that charges might be possible depending on the outcome of the investigation.

The police department clarified what while Pilgram was wearing dark clothing — information contained in the initial police report — the police investigator does not think it was a factor in the incident because it happened during daylight hours.

“When the victim was struck, he had already established himself in the roadway and so the investigation is still active and investigators are trying to determine if other factors played a role …,” the spokesperson said. “They are also in the process of determining if drivers will be issued citations as that’s still a possibility.”