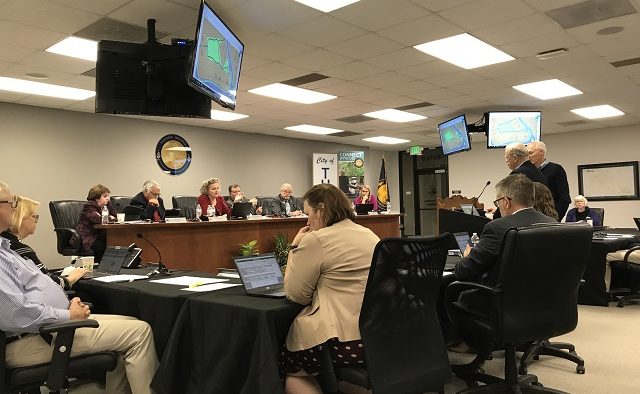 John Wieland and Steve Ficarra speak on behalf of the gated community development at LaVista and Midvale. Photo by Logan C. Ritchie.
Share

Several of the residents who spoke out against Betancourt Construction’s gated community at LaVista and Midvale in November were in attendance at last night’s City Council meeting. Concerns included parking, lot size, density, infrastructure, saving trees and the impact on local schools.

Webb said, “We are talking about 63 units on 23 acres, just to give you some context. I’ve provided this information to staff, so you may have seen it. Density in the area now, based on 50 years of development is 2.2 units per acre.  We are asking to go to 2.8 units per acre.”

Neighbors who spoke in November, including Lexi Hoefer and Bill Kelly, again urged City Council members to think long and hard about the plan.

Ashleigh Rioux said, “The next development could be in your backyard. Come up with an amended plan. It’s what the community has been saying they wanted all along.”

Council member Michelle Penkava replied, “We have all been involved in conversations with the applicant on this project for a very long time. It’s hard because the necessity of being involved, and making comparisons, and doing research on the builder and developer. That doesn’t always play out right here [city council meetings]. It seems like we come, hear comments, and make decisions. I want to assure you that’s not how it happens.”

She continued, “With this particular plan … there will be 19 homes that feel like they are sitting on a nature preserve. They’re going to have a beautiful view of all that nature that’s going to remain untouched. They’re going to have everything we all talked about: the existing trees, foxes, and all the things that we love about Tucker will still exist. And 19 homes will actually abut that. That’s a really big added value.”

Councilmember Anne Lerner reassured residents that a decision made by City Council is never based on how many people show up to a meeting.

The Chevron gas station at 4246 LaVista, near the I-285 on-ramp, will get new gas pumps and convenience store according to the first read of the project by Tarek Real Estate. Only one request came from city council member Anne Lerner, who asked that drug paraphernalia not be sold at the convenience store. A second read of the proposal will be presented Jan. 27.

Both properties applied for SLUPs to allow four residents in the homes.

The personal care home at 2722 Regal Way was heavily contested at City Council meeting in December 2019. Neighbors cited property values, noise levels, and commercialization of the neighborhood as major concerns.

Thirty-seven letters were hand-delivered to City Council on Jan. 13 arguing against that project. In addition, 20-year Regal Way resident Paul Osman presented a map and petition signed by about 30 neighbors.

But new voices spoke up in favor of the facility.

Suzanne Borchert said, “I live 1,500 feet from this home and I would be proud to have them in my community. I believe Tucker is a place for all people – all races, all abilities, all intellectual and physical abilities, all people.”

Tucker resident Lisa Carlyle, who has worked with intellectually challenged teens, said that after graduation from high school “they have nowhere to go. There are high-level functioning disability children who want to be just like everybody else. They want a place to live on their own, away from their parents … they need that space.”

Before voting against the personal care home, council member Matt Robbins inquired about staff to resident ratios. He confirmed that without the SLUP, under Tucker code, Reisman can maintain a PCH of three residents.

Lastly, applicants McCook and Thyme were welcomed to Tucker by Mayor Frank Auman without much discussion about their senior living home at 5200 Chamblee Tucker Road.

The next Tucker City Council meeting is Jan. 27.

Correction: An earlier version of this story misidentified someone in a photo caption. This story has been updated with the correct information.