A guide to researching African American genealogy in DeKalb County

A guide to researching African American genealogy in DeKalb County 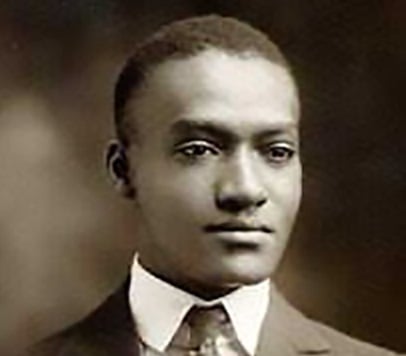 Joseph Samuel Ebster was born in Decatur in 1902. Image provided to Decaturish
Share

Laurel Wilson is a historian and genealogist with a focus on African American heritage in Decatur and DeKalb County. She holds a master’s degree in Public History from Georgia State University and has practiced genealogy for over 20 years. You can learn more about her work and contact her via Decaturhistory.com.

DeKalb County, GA – It’s well-known that researching African American genealogy is difficult, especially when trying to break through the wall of the antebellum period.

But in many ways, researching DeKalb African Americans back to at least 1870 is very similar to researching white residents of the same time period, with some caveats. For the most part, you will look at the same types of records and you will come across many of the same issues, such as name variations, loss of records due to disaster, location name changes, and census-taker errors.

However, African American genealogy does have its own set of unique challenges, especially in DeKalb County:

– Recorded age across documents tends to vary more for African Americans, sometimes with a 10+ year difference

– African Americans may appear in multiple households in the same year if they worked domestically so data may conflict, and people may not be listed with family members

– Between 1870 and 1940, African Americans in the south frequently moved out of state

– Contrary to popular belief that enslaved people kept the names given to them by their enslavers, after emancipation many people changed either or both of their first and last names, making them difficult to locate before the 1870 records

So given the challenges of this kind of work, what’s the best way to go about it?

Here are some tips that will help you in your search:

– Save everything you come across and keep it all in one place.

– Source everything. You will inevitably come across inconsistencies in your research, but if you keep a good record of your sources, you will have an easier time comparing facts and analyzing the reliability of certain information.

– Use genealogy software to store and organize your findings. There are many options out there, both paid and free, and while some offer more features than others, they all have basic functions such as recording names, relationships, important dates and places, and sources. I personally use MacKiev’s Family Tree Maker to manage dozens of family trees, but there are free options such as RootsMagic Essentials. Both Ancestry.com and FamilySearch.org also let you save records to a web-based family tree for free.

– Record all family members, not just your direct ancestors. Because extended families often lived together, knowing the names of siblings and other family members can help you get past blocks. If you come across people whose relationship to your ancestors you’re unsure of, record their names and all information about them in a separate spreadsheet, along with where you got the information. You can add them to your tree later when you find stronger evidence.

– Pay attention to names. Look for unusual names and possible variations in spelling. People can be listed in different records using any combination of first or middle names or even nicknames. Also, be careful not to mix up juniors and seniors.

– Look for existing trees for your family on websites like Ancestry.com. Not only might you discover new ancestors, but you can reach out to possible living family members, as well. However, if you do find an existing tree, do not immediately save it to your own tree. Due to many factors, there are many inaccuracies floating around in family trees, so unless you are pretty sure of the data, use what you find as a guide and not as hard evidence. 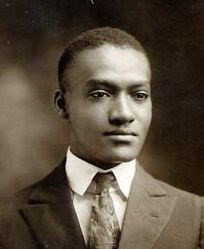 Joseph Samuel Ebster was born in Decatur in 1902 to Fannie Paschal Ebster and Rev. Donald Grant “D.G.” Ebster, for whom Ebster Park and Recreation Center are named. Joseph Ebster attended Morris Brown College, where he was a pitcher for the school’s baseball team, a member of the Glee Club, and chapter president of Omega Psi Phi, a historically African American fraternity. In 1926, he married Jessie Mae Ware of Atlanta and they moved to Chicago looking for a better life. I received this photo and Joseph’s biographical information from his granddaughter Deb Ebster after I discovered her public family tree on Ancestry.com and reached out to her. Image courtesy of Deb Ebster.

What are the best places online to research this information?

Here are my top five sources of online information:

– Census: With very little exception, African Americans do not generally show up in the federal census for DeKalb County until 1870. However, in looking for ancestors between 1870 and 1940, the census is the best place to start because of the wealth of basic information it provides, including names, ages, relationships to others in the household, occupation, where someone was born, residence, and sometimes even an approximate marriage date. You can search the census online through Ancestry.com (paid) and FamilySearch.org (free). Note that the 1890 Federal Census no longer exists for most of the country, including DeKalb County, due to a 1921 fire in the nation’s capital that destroyed nearly all of the records.

– Death Records: Historic death records for DeKalb are primarily in the form of death certificates, the Georgia Death Index, 1919-1998, and the U.S. Social Security Death Index, 1935-2014. Actual DeKalb County death certificates are only publicly available from 1919-1942, with online access for various years through Ancestry.com (paid), FamilySearch.org, and the Georgia Archives Virtual Vault.

Death certificates are an excellent resource because of the information they can provide, for instance, specific birth and death dates, the specific location of birth and death, cause of death, last known residence, place of burial, and names and birth locations of parents. Keep in mind that the birth and family information found on death certificates is as reliable as the knowledge of the informant; it’s not unusual to find only an approximate date of birth or “unknown” listed for one or both parents. Particularly when researching formerly enslaved people or those whose parents were enslaved, death certificates can help you break through brick walls by providing names, dates, and places that you may not be able to find anywhere else. 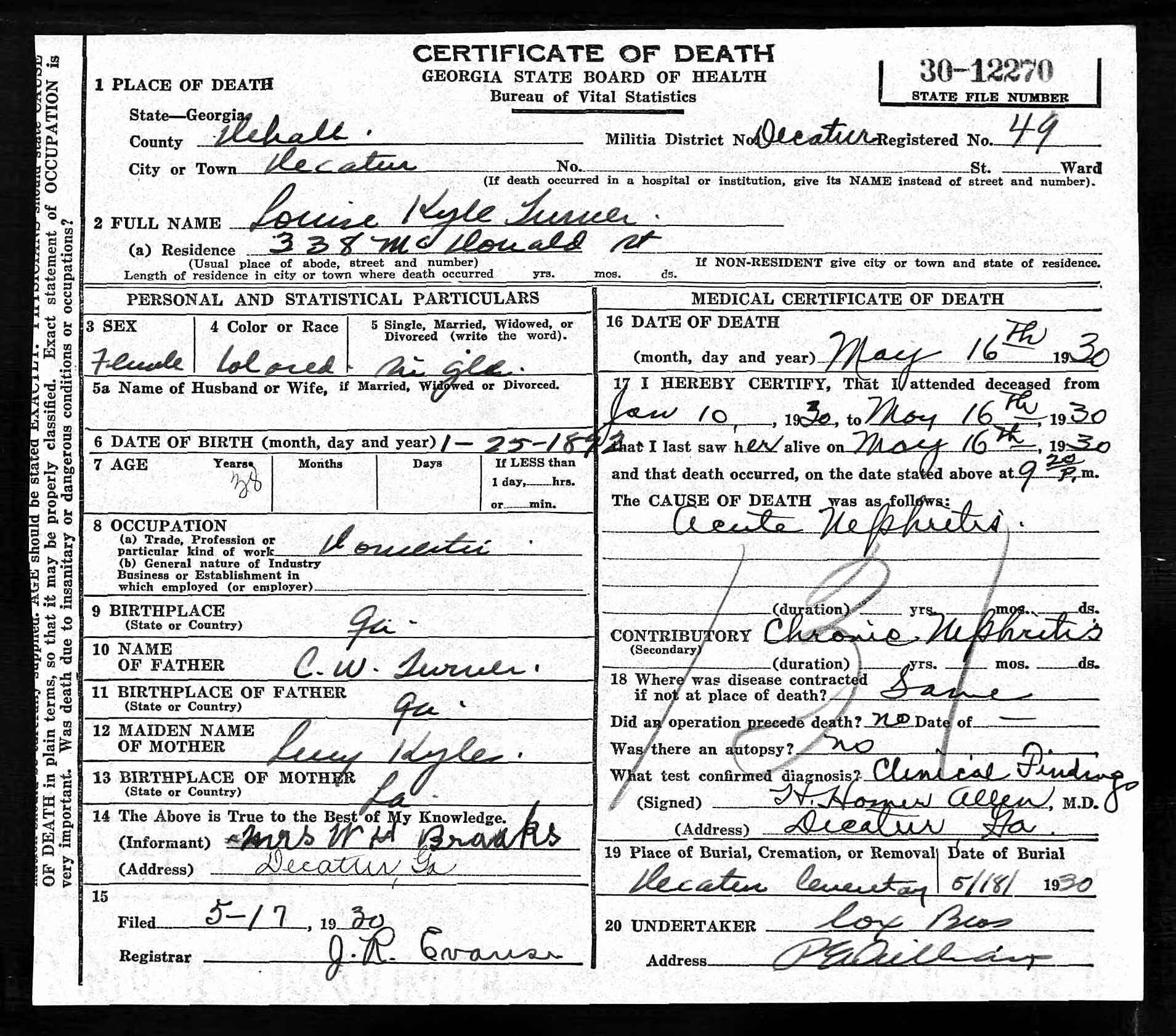 This death certificate for Louise Kyle Turner provides us with her exact birth date (January 25, 1892), her exact death date (May 16, 1930), when and where she was buried (May 18, 1930, Decatur Cemetery) and the names of both of her parents, including her mother’s maiden name. The informant is Mrs. W.H. Brooks and Louise’s last place of residence, according to this, was 338 McDonald St. When we compare this information to the 1930 census, we find that her address was actually 338 McDonough, that she lived with her mother in the Brooks home, and that Violet Brooks was her aunt. So while the death certificate gives us a lot of information, comparing it to other sources gives us a more accurate and detailed picture. Image from Georgia, Deaths Index, 1914-1940, Ancestry.com.

– Military Records include draft registration cards, service records, and even headstone applications, and you can find them online through Ancestry.com’s paid subscription, as well as for free on FamilySearch.org. You can even order copies of records directly from the National Archives, as long as the person’s discharge date was more than 62 years ago.

Military records can be a great resource, providing information such as full name, date and city of birth, current residence, the person’s occupation and employer name, the name of the nearest relative and their relationship, and a physical description of the registrant.

– Newspaper death and funeral notices are an incredibly valuable resource when trying to piece together families. Death notices are helpful in discovering or confirming the date and location of someone’s death, and funeral notices can be a goldmine of information, listing surviving family members and where they lived at the time, the church where the funeral was held and who officiated, and location of burial. Funeral notices are especially helpful when trying to research a woman’s family because you might discover her maiden name through either male siblings or surviving parents. 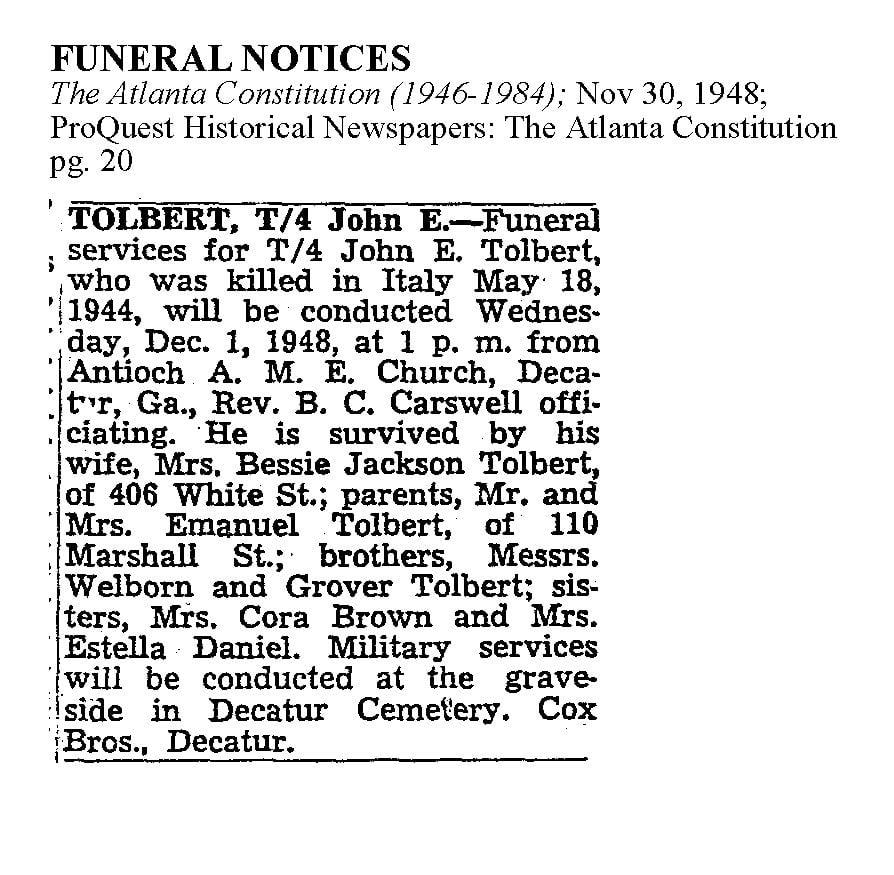 This funeral notice for John Edwin Tolbert gives us a good look at basic information on him and his family. We discover his father’s name and address in 1948, his wife’s maiden name and address in 1948, the names of his brothers, and the married names of his sisters. We also learn that he died in Italy on May 18, 1944, while serving in WWII and that he was buried with a military service at Decatur Cemetery four years later. To find out more about his military service, you could cross-reference this information with his military headstone application.

– Marriage Licenses provide you with not only the year of a couple’s marriage but also a woman’s maiden name (or her name from a previous marriage). In DeKalb County, early African American marriage records were either kept in a separate book labeled “colored,” or individual names might be followed with the label “col.” You can find marriage certificates online through Ancestry.com (paid) or FamilySearch.org (free). 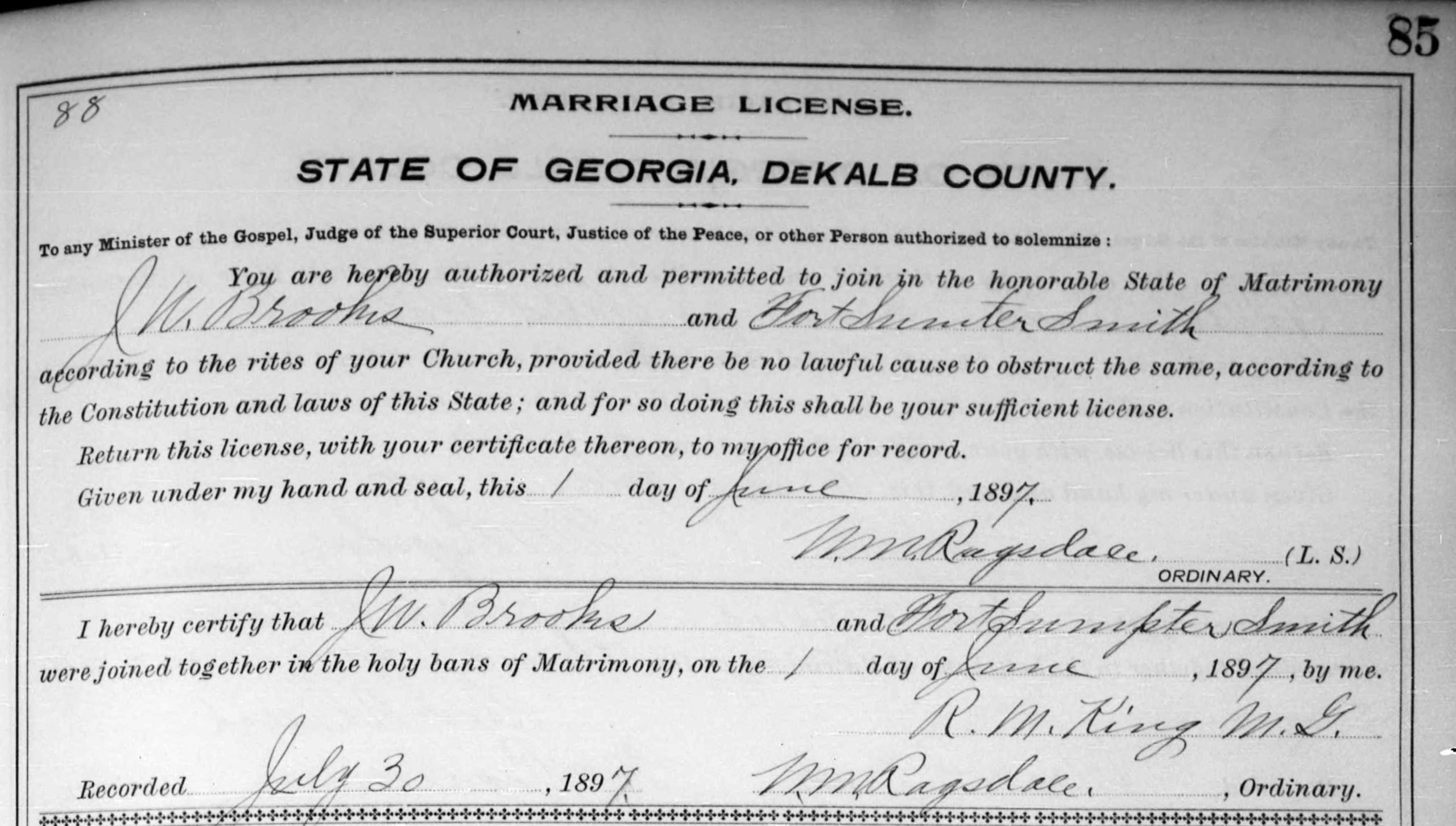 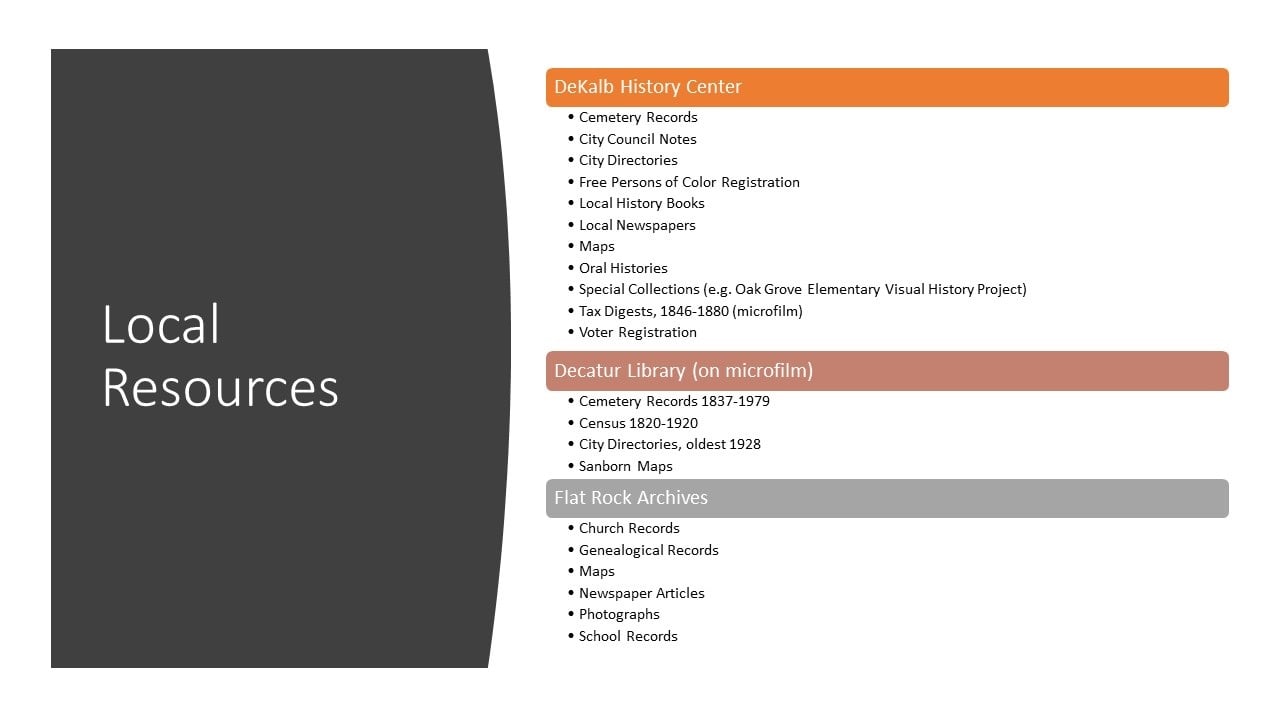 Because very few records were kept of African Americans before the 1870 census, you might have to search for clues in the records left by white people. When trying to break past the 1870 wall for African American genealogy, you must think outside of the box. Although many enslaved people did change their names upon emancipation, some did not. In researching enslavers in DeKalb County, you might be able to find traces of the African Americans they enslaved.

The Georgia Journal, Federal Union, Southern Recorder, and Atlanta Weekly Intelligencer (which can be searched for free through Georgia Historic Newspapers) all published slavery auctions and estate sales by county, including DeKalb, where all auctions took place at the courthouse steps. While advertisements did not always list the names of the enslaved, many did, along with age. These ads can be cross-referenced with other antebellum documents found on Ancestry.com and FamilySearch.org such as the 1850 and 1860 Federal Slave Schedules, which list the names of enslavers along with the sex and age of enslaved, and the 1850 and 1860 Mortality Schedule, which lists all deaths in the county, including the full names and ages of enslaved African Americans.

And while very few African Americans were free in antebellum DeKalb County, you can consult the DeKalb County Inferior Court Register of Free Persons of Color, 1851-1864 either online at Ancestry.com or in person at the DeKalb History Center Archives.

Finally, for five years I have done extensive genealogical research on African American families in Decatur and surrounding DeKalb County, so please do feel free to contact me to see if I might be able to fill in some gaps for you.

I wish you much success in your genealogical journeys.