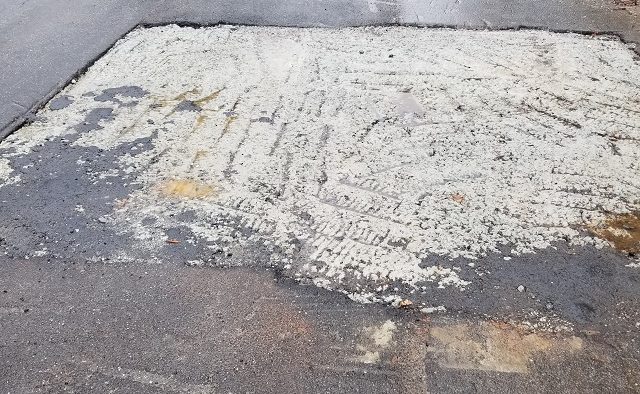 East Lake Terrace in Kirkwood was damaged due to sewer system work. The road is being repaired. Photo by Maggie Stewart
Share

Sections of roads in Kirkwood were left with rough asphalt patches after the Atlanta Department of Watershed Management contractors worked on the sewer system. Those roads are now scheduled to be resurfaced this week with work anticipated to be completed by Feb. 7.

To complete the process, the contractors had to access the sewer and manholes in the area to fix sections of the sewer lines, according to DWM.

“While this work is underway, street surfaces are temporarily patched during the survey and inspection phase of each project. Once all sewer work, surveying, and final inspections are confirmed and approved by the City of Atlanta, crews will fully restore impacted roads,” the email said.

Chrencik said East Lake Terrace is especially in poor condition and has been for about six months.

He said when the city replaced the water or sewer lines the contractors cut a strip down the middle of the street.

“They replaced sewer or water and then when they were done, they put an asphalt patch on it that’s so irregular. You drive over and it almost throws you out of your car seat. Then they just left it that way,” Chrencik said.

“They still have cones sitting out but it’s been like that for half a year and they’ve not done anything. That’s one of the worst,” Chrencik said.

Work began on East Lake Terrace on Jan. 31 when it was milled. Paving with new asphalt began on Feb. 1. Work is anticipated to be done by Feb. 5. Speed bumps will also be replaced on Feb. 5.

“They had trenched out a channel in the middle of the road which is like an entire lane wide. They put a patch on the trench, like they filled it in. They finished their work and then they put, again, an asphalt patch on it,” he said.

That patch then sunk in making it difficult for drivers to drive on the road without scraping their car. Cones were then put out and have been up for about two months, Chrencik said.

“If you cross Hosea at the point and you go in the wrong area, you will bash your car on the road, or you’ll be thrown up and your car will go airborne. It’s just really bad,” Chrencik said.

“It makes like a half-circle. It’s like this rut. It goes for hundreds of yards that way down Hosea,” he added.

Work on Hosea Williams Drive Northeast is scheduled to be completed by Feb. 7.

“I mean the steel metal plates that you drive on are orders of magnitude more smooth than the asphalt patch that they left permanently. Lakeview has been messed up for at least a year and I think they’re done with it,” Chrencik said.

The email from DWM did not mention if Lakeview Drive Northeast would be resurfaced.

Chrencik said the situation is frustrating because it seems like the contractor is done with the work and is not coming back to fix the roads, causing cars to be damaged.

“There’s just no care put into putting the road back to the way it was or making it even at all drivable. It is just undriveable on East Lake Terrace,” Chrencik said.

“I would expect the minimum standard to be that they restore the road to the way that it was before they did the work,” he added. “I’m not expecting sidewalks or perfection, but at least put it back to the way how it was where it’s drivable and doesn’t rock your car or scrape your bumpers and stuff like that.”