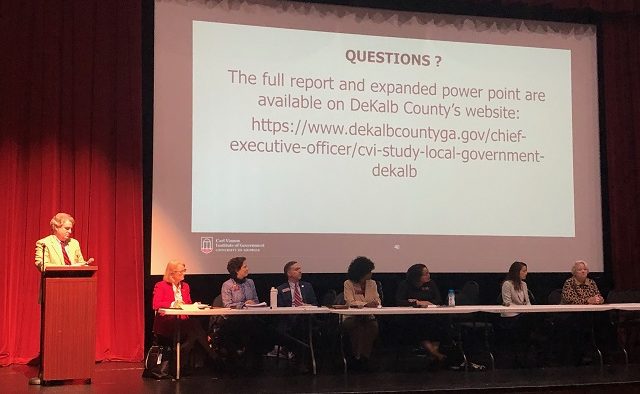 Dekalb County’s delegation to the state House of Representatives hosted a town hall meeting Tuesday, Feb. 18 to discuss a study about the impact of proposed new cities on county finances. State Rep. Karla Drenner led the steering committee in evaluating the creation of new cities in Dekalb County.

The cityhood study focused on the potential costs of creating new cities in three areas: Greenhaven, Vista Grove and all unincorporated land north of Highway 78, including the proposed city of Vista Grove. The CVI study compared these areas to the newly created cities of Tucker and Stonecrest. Baggett explained that the concentration of the study was on services that the cities would take over from the county, not all municipal services.

New cities would take over some or all services from the county. Costs of police, courts and licensing were among the services reviewed in the study. The overwhelming expense is in creating city police services. Overall, the report showed millions in annual revenue losses to Dekalb County government.

According to the report, a proposed city of Vista Grove would cost the county $17.5 million, an estimate that is higher than the $16.8 million estimate provided in a December presentation about the report’s conclusions. A large portion of that cost – $11 million – would be caused by transferring police services to the new city. But Vista Grove supporters are open to partnering with DeKalb Police, which would eliminate this cost.

Vista Grove would be bordered by I-85 on the northwest side, I-285 on the eastern side and would have a population of around 60,000 people.

Greenhaven, which would cover most of Southwest DeKalb county and have a population of 300,000 people, would cost DeKalb County $2.9 million annually. Greenhaven would not provide police services.

The third study area, which includes the proposed city of Vista Grove, would cost the county $26.5 million, with police services accounting for $17.4 million of that cost.

Rep. Oliver said after the meeting that legislators are working on a substitute bill for Vista Grove that would exclude police services. It is not clear where the Greenhaven effort stands.

As audience questions came up, Baggett explained that if county police services fall under the city, there are still special services necessary in policing. These could be provided by the county sheriff.

Baggett added that cities can collect municipal fees unavailable to the county. While that is added income to the city, one resident pointed out, it also increases costs for residents.

Greenhaven cityhood organizers expressed the need for a closer relationship with the business community. They believe cityhood may provide better commercial property development in the area.

A resident living in the boundaries of the proposed city of Vista Grove asked for a moratorium on all annexation. Annexation into existing cities may come up on the 2020 Legislative session. But there are ways to annex Dekalb County property into a city without going through the Legislature, including annexation via a petition signed by residents who want to be annexed.

“The cities and the neighborhoods have made a proper decision that the DeKalb delegation is too much trouble to deal with,” Oliver said. “They have other legal routes.”