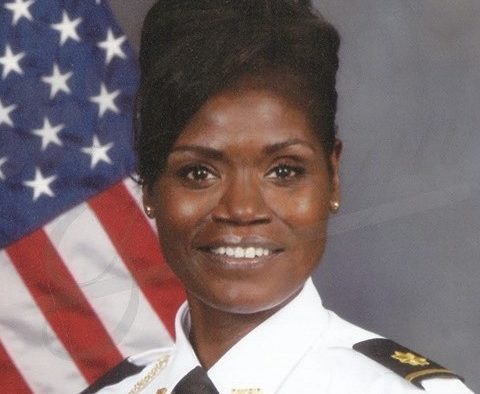 Decaturish sent questions to candidates running for DeKalb County Sheriff. The election is March 24, which also coincides with the state’s presidential preference primary. We will publish the candidates’ responses throughout the week. For more information about voting in the upcoming election, please see the note at the end of this post. For all of our 2020 election coverage, visit Decaturishvotes.com.

Editor’s note: Candidates were each given a deadline of Feb. 14 to respond to our questionnaire. Stringer submitted her responses on Feb. 21, after our deadline.

I am running because over the past several years I have watched as the Sheriffs Office deteriorated into a for-profit business for a handful of non-law enforcement individuals. I want to restore the agency to what it was originally intended to be. An organization where the Sheriff truly behaves as the Chief Constitutional Law Enforcement Officer. Taking care that the Jail and courts are properly maintained and the warrants are served as prescribed by law.

2) What makes you a better candidate than your opponents?

I have met all of the other candidates with the exception of one. I think they are all great people and would not consider myself as being better than any of them. I do however have different and more relevant qualifications. I am the only candidate in the race with 30 years of experience actually working in the Sheriff’s Office. I began my career as a Detention Officer and I worked my way through the rank to Major.  I was also selected by the Chief Superior Court Judge to serve as the interim sheriff when the former sheriff was suspended. Upon my election, I will be the first sheriff in the past 70 years to actually work their way from the bottom of the agency to the top.

3) If elected, what will be your top two or three priorities?

My top priority would be untangling the private interests from the taxpayers’ dollars. No former Sheriff will be allowed to make money by controlling the way the contracts are awarded.  I will simultaneously begin to work on the security issues that plague the agency such as staffing issues ( Detention Officers and Deputies), mold and a deteriorating lock system. Equally as important to me is the upgrading of courthouse security. We cannot continue to sit back and wait for another courthouse shooting to occur before we act.  The third top priority would be to meet with community members and leaders from local cities and municipalities to determine how we can best pool our resources to take decisive actions to curtail crime in their jurisdictions.

4) The DeKalb County Sheriff’s Office has a reputation of being a corrupt institution. Do you think this reputation is deserved and, if so, what would you do to change it?

The DeKalb County Sheriff’s Office reputation of being corrupt is unfortunately well earned by the actions of past administrations. Unfortunately, the dedicated employees of the agency have suffered great embarrassment by those who have been elected to the office of  Sheriff. I firmly believe that because those elected have had no ties to the agency, prior to taking the seat of Sheriff, they do not have a true interest in doing what is best for the agency. I have worked in the Sheriff’s office for  30 years and have often voiced my concerns and made attempts to change things for the good only to be stopped or stifled by the whoever may have been Sheriff at the time.  I will be the Peoples Sheriff, truly ethical and loyal to the oath of the office. I will conduct myself in a manner that will inspire those employees working under my leadership to also rise up and be the best employees they can be for the agency and the county.

5) As sheriff, what will be your policy regarding cooperation with Immigrations and Customs Enforcement?

I will not cooperate with Immigration and Customs Enforcement in making arrests with warrants that are not signed by an actual judge.

6) As sheriff, what will be your policy on housing transgender inmates?

The Sheriff’s office developed a policy on housing transgender inmates two years ago. I assisted in the development of that policy and would maintain it.

7) Within the last year, local activists have raised concerns about the treatment of people held within the county jail. Do you feel inmates in the jail are being mistreated? If so, what would you do to change it?

There have been several instances where the inmates have been mistreated due to the actions of individual officers or contracted medical providers. Sometimes when law enforcement officers work in the environment of a jail or in a high crime area, they develop biases that may cause them to mistreat people who they deem as being beneath them or the cause of their daily stress. As unfortunate as this may be, we must face the fact that it is a reality in the law enforcement community. I would immediately have each officer who has been there for over 5 years psychologically reevaluated to ensure they have not developed such biases. If the examining psychologist determines they have such biases I will notify them of the findings so that they can be aware they are susceptible to and provide the necessary training to help them overcome. To ensure the health care providers treat the inmates correctly we must ensure the medical contracts are awarded to the best provider and handled above board in a true and transparent manner.  In either case, if the Sheriff’s personnel or medical care providers mistreat an inmate or any citizens they will be disciplined as prescribed by DKSO policy, contractual agreement and/or the law.

8) Prior to his retirement, Sheriff Jeffrey Mann was facing the possibility of having his certifications revoked due to an arrest in Atlanta in 2017 for exposing himself in a public park. Do you agree with his decision to remain on the job instead of resigning following his arrest and guilty plea?

I do not agree with Sheriff Mann’s decision to stay on the job following his arrest and guilty plea. The most honorable action would have been to resign.

9) As sheriff, what will you do to help rehabilitate inmates in the county jail?

Currently, the inmates are afforded the opportunity to pursue a GED if they have not completed high school. I would continue that program. In addition, I would partner with local technical colleges and trade schools to bring real-life training that would result in the inmates earning certifications and trade licenses.

10) This question comes from a reader: The Georgia Department of Corrections recently made a policy change to provide free and unrestricted access to feminine hygiene products to women in state facilities. This does not apply to county facilities. Will the Sheriff ensure this policy is also implemented and upheld at the DeKalb County jail?

11) Another question from a reader: It currently costs $2.70 for a 15-minute call for those in the county jail. Will the Sheriff continue allowing private to charge such high rates for family communication?

I plan to review all contracts and ensure they are in the best interest of the citizens of Dekalb County and the inmates housed in the jail. I will be a sheriff of action, cutting costs wherever feasible. The contract will go out to bid and the best and lowest bid will be selected and sent to the county organ for printing so that all citizens can know which provider has the contract.

12) What will be your family visitation policy for inmates?

Inmate visitation is now being conducted through video visitation. It is my opinion that the current method used for visitation is best for the security of the jail.

13) What will be your approach to mental healthcare at the county jail?

Mental Health care is a huge concern of mine because many of our veterans are affected by mental health traumas and are sometimes not properly treated or may have committed a crime simply because they missed a dose or two of their prescribed medication. I would like to enhance the program currently in place and have a specially trained team off officers and civilians be assigned specifically to those identified as mental health inmates.  It is very important that we help connect them with the social services they may need to function as productive citizens in their daily lives. I would ensure the officers assigned to the team are equipped with a agency issued cellphone so that the inmates assigned to them can reach them if they need someone to direct them to help services once they are released. Many of the inmates suffering from mental health issues do not have family members or friends who they can call when they cannot get their medication or need to get to the doctor. The officers will be equipped with the proper information to pass onto the caller.  General  oversight would be given by the current mental Healthcare provider.

14) If elected, do you promise to conduct yourself in an ethical and transparent manner?

More information about voting in the March 24 election:

The voter registration deadline for the March 24 presidential primary is Feb. 24.

If you find you are not registered, there are a few ways you can get back on the voter rolls.

People who wish to vote will need to bring one of the following forms of identification, according to the Georgia Secretary of State’s office:

– Any valid state or federal government-issued photo ID, including a free ID Card issued by your county registrar’s office or the Georgia Department of Driver Services (DDS)

Early voting will begin on March 2. Here is a list of advanced voting dates and times from the county Board of Registration and Elections: 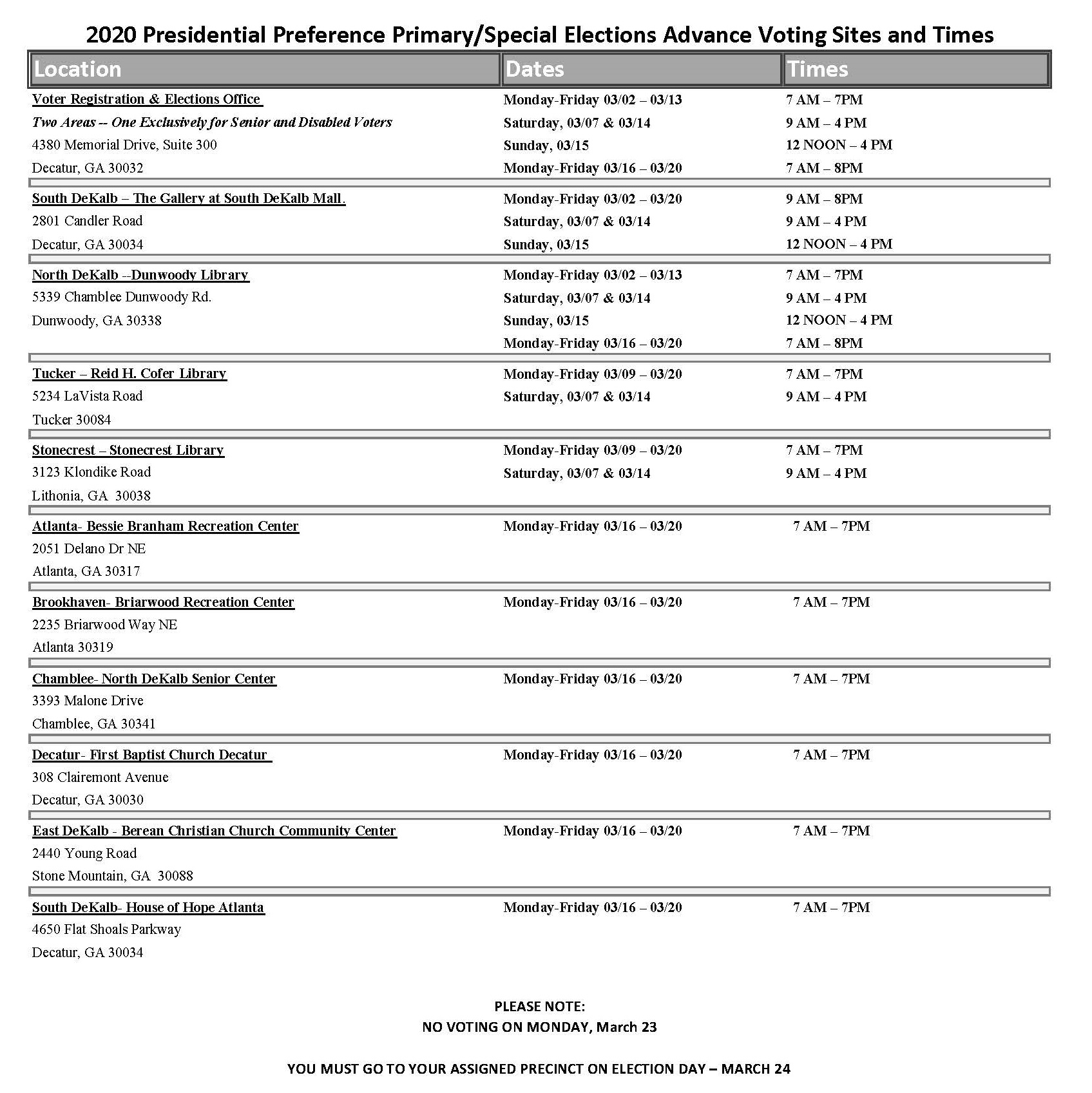