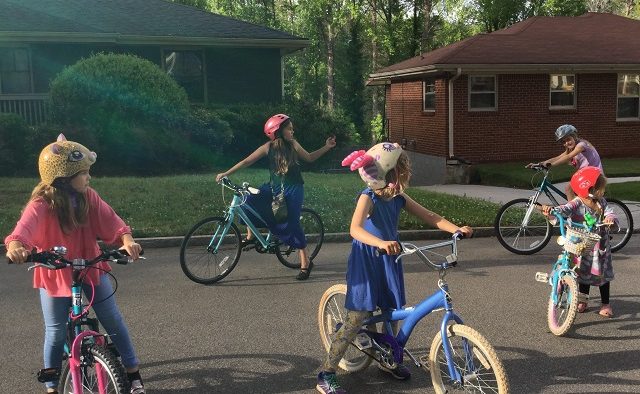 The Atlanta Journal Constitution recently published an article about the new protected bike lanes in downtown Decatur. The authors quoted a couple drivers who claimed that the bike lanes slowed traffic, but they didn’t quote any kids, such as the one in the photo splashed across the front page. If they had, they would have found that that child – like so many other Decatur schoolkids – supports the bike lanes, which are there to keep them safe.

Decaturites have worked hard to make Decatur great for kids, helping build an outstanding school system and a culture of walkability and bikeability that gives kids the freedom to get around on their own power, something kids in car-centric suburbs don’t enjoy. Decatur kids have the highest walk- and ride-to-school rate in Georgia, and one of the top in the nation. Parents know that kids who ride their bikes or walk to school are healthier, more independent, and more confident. Studies also show that children who walk or ride to school concentrate better and report higher happiness than those who are driven to school.

Yet not all kids are currently able to bike safely around Decatur. The city is pierced by dangerous roadways, and parents are understandably nervous about letting their children ride on or across them. The new bike lanes are meant to be the first step in a solution to this problem: a trunk of protected infrastructure that will enable kids to bike from most parts of Decatur safely to Decatur High, Renfroe, and F.AVE, all of which are located right along the main core of the planned network. Think of it as a bike boulevard stretching north and south, to complement the PATH Stone Mountain Trail that already runs east and west.

Although some people have begun blaming the bike lanes for traffic problems, bike lanes are in fact at most a minor contributor to our traffic issues. The most significant contributor is a population explosion: the number of people living in Decatur has surged by thirty percent over the past decade, and nearby areas are also seeing significant immigration. Another significant factor is that Americans are driving more miles than ever before. Add to these factors the rise of Lyft, Uber, and Amazon, whose vehicles have been shown to have significant deleterious effects on traffic.

In fact, good bike lanes actually help alleviate motor vehicle traffic issues. Each person on a bike means one less person in a car, and bike lanes are far more efficient than automobile lanes, able to carry ten times more people per unit space. Look at the crowds of kids walking or riding after school at Renfroe or Decatur High and imagine how much space they’d take up if they were all in cars.

But to have this positive effect, the downtown bike lanes will have to link up with the rest of the planned network, which is still not yet slated for construction. After all, what use is a safe bike lane that dumps you onto a busy roadway before you get close to your destination?

The good news is that the north and south phases of the planned network wouldn’t remove automobile traffic lanes. The northward spur would follow Church Street and simply replace the vertical bollards that are currently there with a safe protected bike lane (the project has already been funded by a generous federal grant). It should have little effect on automobile traffic. The planned path that would run southward along South McDonough Street to connect to Oakhurst Village and F.AVE would also not remove automobile travel lanes.

The city should fast-track these planned bike lane projects, not just to protect kids today but also to protect their futures. On the evening of 30 January, when the city kicked off its strategic planning session, kids from Decatur High and Renfroe Middle School came out in droves to lobby for the climate. They’re naturally deeply concerned about the future, pointing out that we have only ten years to do something significant to decrease greenhouse gas emissions. Otherwise a cascading climate collapse becomes highly likely.

It turns out that one of the best things we can do for the climate is to decrease driving. Transportation is now the USA’s single greatest source of greenhouse gas emissions, and automobiles are the biggest contributor. Some people put their faith in electric vehicles, but this faith is misplaced, because two thirds of Georgia’s electricity power comes from burning fossil fuels. There’s no getting around it. It’s virtually impossible to meet emissions targets unless we cut back on our automobile use. Bikes can provide an effective and convenient alternative to cars for many people.

What would it take to persuade more Decatur citizens to use bikes for transportation? Perhaps not as much as you might think. Many Decaturites already ride to work, for the environment and for their health and well being, and many more would like to but find the prospect daunting. Studies show that a majority of Americans who commute by car would like to get around by bike but face impediments, of which the most important is safety.

Biking alongside cars is frightening, but build a safe and connected network of places to ride, and things can change quickly. Cities like Portland, Minneapolis, New York, London, Paris, Amsterdam, and Copenhagen have found that once a proper safe bike network begins to emerge, people increasingly use bicycles, with tremendous positive effects for the environment and for their own health. The rates of biking for all citizens – not just kids – has risen to fifty percent or more in cities with the best networks. Imagine how many fewer cars that would mean in Decatur.

This is the future the City of Decatur is looking towards. We all hate driving in traffic, but in surveys that the city carried out, the vast majority of respondents said they would be willing to exchange some driving convenience in return for safer infrastructure for walking and biking. We are willing to endure a lot for the sake of our kids. We want them to be safe, healthy, independent, and prosperous, today and far into the future.

This isn’t a new phenomenon. Decaturites have a long history of vision when it comes to the built environment. In the 1980s, when the city began planning the downtown renovations that eventually resulted in today’s Decatur Square, many people thought the project foolish. It required closing off a city street and focusing urban development around a MARTA station, all during a time of suburbanizaiton and transit phobia. Decatur persevered, and now our downtown is a nationally-recognized model of urban development. Next-door Atlanta had a similar experience with the Beltline. Naysayers said the project was a waste of money and would never be used. It ended up transforming the city and, much like Decatur Square, is being copied around the country.

The City of Decatur is continuing its commitment to people-centered urbanism by planning this bike network. Yes, some people will complain that it’s a waste of space, that it will worsen traffic, that no one will use it. But let’s have faith in our vision. See it through and the City of Decatur will once again help point the way to a healthier, happier, and more sustainable future.