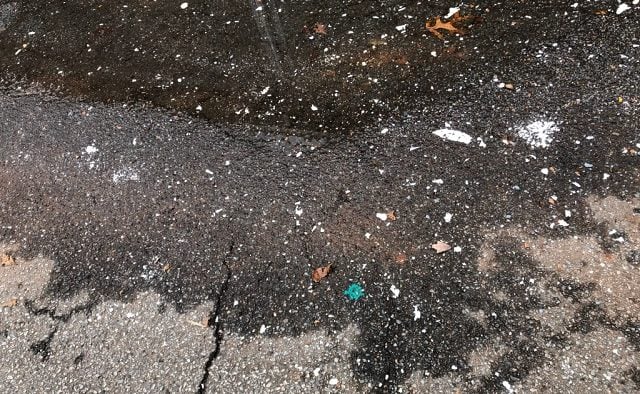 A contractor pressure washed Laurel Ridge Elementary, spreading white paint chips on the ground which may have made their way into Burnt Fork Creek. A neighbor tested the paint underneath the new coat of paint at the school and found the old paint had lead contamination. The School District says their independent tests of paint on the front canopy were negative, but they found lead paint in the school's front window seals. Photo provided by Carol Hayes, a DeKalb County resident who lives near the school.
Share

The confirmation came after people living near the school conducted their own tests after they saw a contractor pressure washing the concrete pillars at the school before repainting them. The initial concern was that the paint chips were going into Burnt Fork Creek. Then another neighbor, who also happens to be an expert in lead remediation, became involved and raised the question of whether the paint contained lead.

So the neighbors scraped some of the paint off and tested it. The test result showed the presence of lead contamination.

Following that discovery, the school district conducted testing via an independent lab.

“[DeKalb County School District] Facilities Maintenance initiated work with a third-party painting vendor to paint the front canopy, front windows, and front doors at Laurel Ridge Elementary school,” a spokesperson for the district said. “The vendor, A&D Painting, is a Lead Renovation, Repair and Painting (RRP) certified vendor. As reported, after pressure washing the front canopy, there were white paint chips. These chips were tested by a third-party testing firm, Analytical Environmental Services, and all canopy paint chips came back negative for lead.

According to the U.S. Department of Housing and Urban Development, lead contamination can cause a variety of health problems and children are particularly vulnerable.

It is not clear whether testing was done prior to the pressure washing. The school district didn’t immediately respond to a question about that. The residents who first raised the issue believe the contractor didn’t test the paint beforehand.

Daniel Ballard is a professional landscaper who also serves on the Laurel Ridge PTA’s building and grounds committee. He works with the school’s 4H club and they’re currently studying clean water and stream pollution. So the subject was top of mind when he noticed the paint chips. He said he loves the school and is happy that the district is improving the building. The contractors hired by the district also did a good job removing some “unsafe trees,” he said.

But the lead paint issue concerns him.

“If they had done preliminary samples and testing, there would be no reason to need to run to the school to do the testing …,” he said. “It concerns me that they’re not saying that they made a mistake by not doing preliminary testing. The responsibility falls to both the district and the painting contractor on that.”