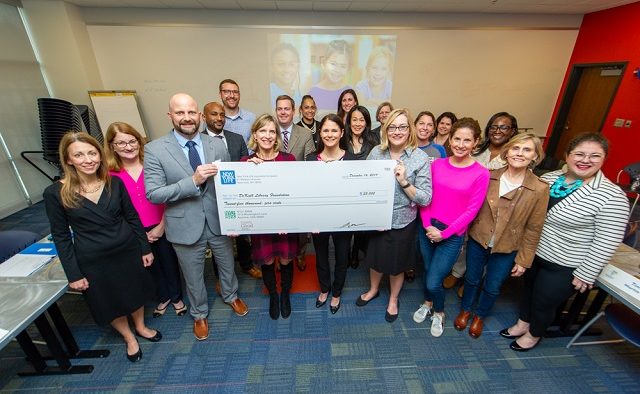 The DeKalb Library Foundation received a $25,000 Community Impact Grant from New York Life that will support an initiative to provide internet for those who don't have access at home. Image provided to Decaturish
Share

Greater Decatur, GA – The DeKalb Library Foundation is hard at work this year after receiving a $25,000 Community Impact Grant from New York Life that will support the organization’s Take the Internet Home with You initiative.

The DeKalb Library Foundation is a nonprofit that provides support for DeKalb County Public Library through funding as well as educational, cultural and literary programs and services, according to the foundation’s website.

One example is the Take the Internet Home with You initiative which is an effort to bridge the digital divide for citizens in DeKalb County who may not have access to the internet in their home, said Cathy McGovern, engagement manager for the DeKalb Library Foundation.

“Funding for this initiative allows DeKalb County Public Library (DCPL) to offer hotspot devices for check-out to patrons. Hotspot devices are portable, rechargeable devices that allow patrons to connect to the internet via their laptops, smartphones or tablets, at no cost to them,” McGovern said.

DeKalb Library Foundation Board Member Tim Martin submitted the grant request as he knew the impact that a grant of this size would make.

“I’ve been going to the DeKalb Library my entire life,” Martin said in a press release. “That has been my main motivation to serve on the Foundation board as a way to give back. Now that we have been awarded the $25,000 Community Impact Grant from New York Life, it makes it even more worthwhile.”

“We are very appreciative to the DeKalb Library Foundation Board Member Tim Martin and his team at New York Life’s Greater Atlanta General Office for their exceptional work on the grant application which resulted in a $25,000 Community Impact grant from New York Life to help fund the Take the Internet Home with You initiative,” McGovern added.

The project began initially in 2017 at five libraries in the county that serve lower-income individuals.

McGovern said there is evidence of the digital divide in the county as two high demand services across the library system are computer terminals and WiFi access. More than 1.5 million sessions are logged on the system’s internet access stations and WiFi combined each year.

“Patrons use our WiFi not only during our open hours, but they continue to use the Library’s WiFi signal when a location is closed by sitting in the parking lot,” she said. “On average, 40-80 logins are recorded across the system’s closed branches on Sundays throughout the year.”

There has been an overwhelming demand for this service and hotspots were checked out at all times with people waiting at the main desk for returns. All DeKalb County libraries participate in this initiative and hotspots can be checked out for a period of 21 days at a time.

“There are currently 200 devices available and they have been checked out more than 4,500 times over the past two years for an average of 187 check outs a month,” McGovern said. “Having 200 devices allows just over 2,300 patrons a year an opportunity to check-out a hotspot.”

The DeKalb Library Foundation also received funding from the Community Foundation for Greater Atlanta and Mailchimp which will allow the DeKalb County Public Library to provide census stations and resources.

Each library will have a dedicated census station with a laptop available for individuals to get counted, McGovern said.