Editorial: Nicki Salcedo on Being Seen

Editorial: Nicki Salcedo on Being Seen 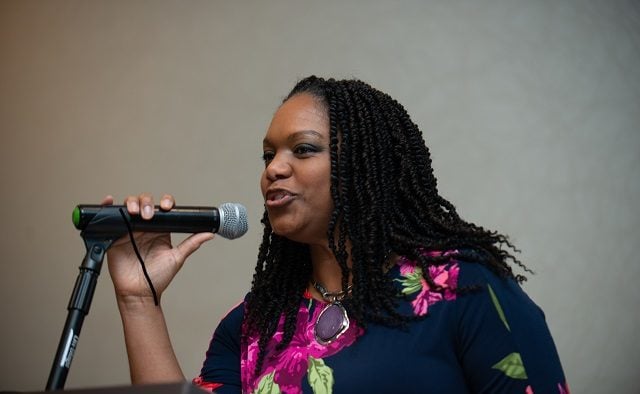 Nicki Salcedo, a Decaturish contributor and columnist, was asked to speak at a Decatur Business Association event celebrating Black History Month. Here’s what she had to say …

This is the beginning of my story. It might be enough to explain why I like the poetry of words. Why I love books and writing, except I didn’t know who Nikki Giovanni was when I was small. It sounded like make-believe, and I did not believe such a person existed.

I went to elementary school in Stone Mountain, Ga.  I remember leaving my class on a Friday in January without much thought about anything other than the weekend. But that Monday when I returned to school at the beginning of February, my teacher had transformed the classroom for Black History Month. It became a museum of photos and information. Across the border of the walls were dozens of pictures of famous African Americans. Athletes, activists, musicians, politicians, scientists, and writers. I was the only brown girl in my classroom, but suddenly the room was filled with brown faces. I studied each one. Eventually, I stood before a photo of a woman with a beautiful smile.

Her name was Nikki Giovanni.

A few years ago, my daughter asked me about the occupations of different people in our family. She wanted to know what her aunts did for a living. One is in business. She has her MBA. The other is a lawyer. My daughter then asked about her uncles, and I told her that one was a lawyer and the other was a physician, a doctor.

Upon hearing this, my daughter started to laugh and laugh. She was young, maybe about seven years old at the time, and she couldn’t stop laughing. I couldn’t figure out why.

When she calmed down enough she said that her uncle could not be a doctor. “He’s a boy!” She explained. “Boys can’t be doctors!”

I said, “Of course the boys can be doctors. Boys can be anything they want to be.” Then I began to think about her world of experience. Her pediatrician was a woman. When we went to the dentist, it was a woman who took care of her. Our eye doctor is a woman. In the biased mind of my daughter, she could not imagine that boys or men could be doctors.

That shows the power of representation.

Many of you will never have the experience of being the only brown kid in a class of white faces. It is a strange truth that as a child, I looked at a picture of Nikki Giovanni and felt seen.

We all have the ability to be that boy who saw me for something that I wasn’t yet. When I was four I could not write poetry. I could not write anything at all. That friend looked at me like I could be something. Ever since then, it has been important for me to look at people with those same eyes.

Even if you are born into so-called privilege, we all have the potential to be victims of self-doubt and deferred dreams.

I’m not only a writer even though that’s how most people around town know me. I’m also a person who enjoys science, I love math, I’m curious about space and biology. At the same time, words have always been the center of my world.

Before I do a presentation, people start by reading my bio. The weird thing about hearing your bio is the feeling that you are finished. You’ve done it all. Honestly, in some ways, my bio feels less like an intro and more a eulogy. I’m a woman of a certain age. I have my education. I have a husband and kids. I have my career. And I have a secret second career. No one knows that I’m often that girl staring at the photograph of Nikki Giovanni.

You are wondering why it matters. What more can you do? There is something more that you can do today.

Be the person who looks at others with hope and great expectations in your eyes. The world tries to forget us. Whether by race or gender or age, but we don’t have to forget each other. You can tell someone they are the next Andrew Young or the next Jimmy Carter. You can tell someone they are as smart as Katherine Johnson or as bold as Oprah Winfrey. These expectations aren’t just for children. We should tell ourselves that we can be the leaders and innovators that the world needs now. And if you want, you can be Nikki Giovanni with me.