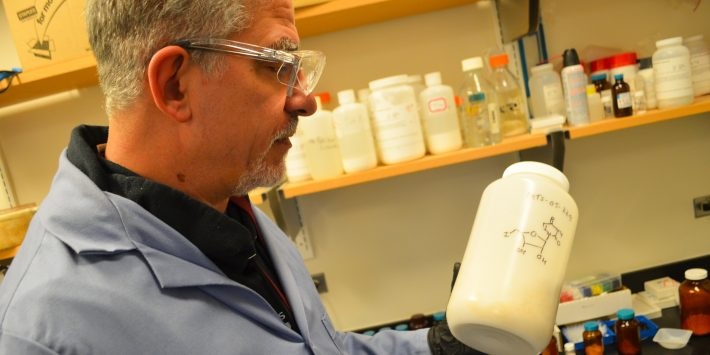 Mike Natchus, who works at the Emory Institute for Drug Development in Atlanta, examines one of the compounds used in the lab where EIDD 2801 was developed. CREDIT SAM WHITEHEAD / WABE
Share

Chemistry and cooking are pretty similar, at least to Mike Natchus.

He walks through a lab in Atlanta and stops at a fume hood, a ventilated enclosure that sucks up dangerous gases, where he picks up a small glass container.

“A lot of what we do looks like you’re working in a kitchen,” Natchus, who works at the Emory Institute for Drug Development, says. “Instead of working with pots and pans, we’re working usually with little flasks and little vials.”

Natchus says, like cooks, chemists often take different ingredients and mix them to create something new.

‘No Virus, No Disease’

That’s how a drug called EIDD 2801 was made. Its name comes from that of the Emory Institute of Drug Development, the university-owned biotechnology company where it was created.

Natchus and others wanted to develop something that disrupted how viruses make more viruses. They took a key part of the viral genetic code and made minor changes.

Researchers at Emory think that genetic “bait and switch” could make the drug an effective treatment for the 2019 novel coronavirus (2019-nCoV) and COVID-19, the recently-minted name for the disease the viruses causes.

“It’s a very simple principle: no virus, no disease,” George Painter, president of the Emory Institute for Drug Development, says. “Or [EIDD 2801] limits the amount of virus on board to a level that’s not sufficient to cause clinical signs and symptoms.”

Fighting Different Viruses With One Drug

Painter says he started working on the antiviral drug in 2013 after he was approached by the Defense Threat Reduction Agency. At the time, the federal agency was looking for a way to fight Venezuelan equine encephalitis, a sometimes-fatal viral disease that causes brain swelling.

But in non-human lab tests, Painter says the drug has shown the ability to work against different viruses, such as those that cause seasonal and pandemic influenza.

Painter says federal agencies have put $35 million into researching the drug since 2013. He says it could be ready for human testing by mid-April.

How quickly it’s available to the general public depends on agencies such as the U.S. Food and Drug Administration, which can lower some of the barriers of getting drugs to market during public health emergencies.

The FDA has already shown a willingness to fast-track tools for the current coronavirus outbreak. Earlier this month, it issued an “emergency use authorization” for a diagnostic test for the 2019 novel coronavirus developed by the Centers for Disease Control and Prevention.

Looking For ‘The Lowest-Hanging Fruit’

Testing out treatments that are already in development is likely faster than starting from scratch with a brand new drug, says Dr. Amesh Adalja, with the Johns Hopkins Bloomberg School of Public Health.

“The first thing to do is take the lowest-hanging fruit, which are other antivirals that may have activity against this virus,” he said.

That’s already happening in China, where researchers have started recruiting people for a clinical trial of a drug originally developed to fight the Ebola virus. The hope is the drug, called remdesivir, could effectively treat the COVID-19.

Emory’s drug is much the same: it’s shown the ability to shut down different kinds of viruses, including coronaviruses.

“[These broad-spectrum drugs] can be useful,” Adalja says. “We have many different viral threats, and if something can work against more than one, it can serve multiple purposes.”

But antiviral drugs do have limitations, says Stephen Morse, who studies infectious diseases at the Mailman School of Public Health at Columbia University.

For one, you have to know who needs them.

“If you can target people who are infected and might be able to transmit to others, it could have a very large effect in reducing the epidemic,” he explains. “But it’s hard to diagnose everybody.”

Morse says antiviral drugs can be beneficial for people who get sick, but cautions they’re not preventative like vaccines. Quickly making enough medication to treat lots of people can also be a challenge.

And the verdict is still out on whether Emory’s EIDD 2801 or any other medication is effective in treating COVID-19. The FDA has not approved any drug to treat any coronavirus.