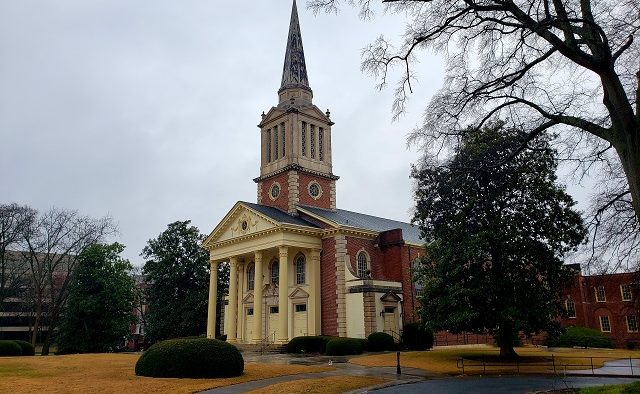 Decatur, GA – First Baptist Church of Decatur recently learned that the Atlanta Metro Baptist Association expelled the church from its ranks over its decision to appoint gay, lesbian and transgender members to church leadership positions.

Jimmy Baughcum, Executive Director with the Atlanta Metro Baptist Association, declined to comment on the matter but noted that the church hadn’t sent a representative to the association’s meetings in two years.

First Baptist Senior Pastor David Jordan said claims that the church hasn’t participated in two years are a “total smokescreen” for the real reason the church has been expelled.

“There are plenty of churches who don’t affiliate at all, and they don’t kick them out,” Jordan said.

He said in May the Metro Baptist Association updated its bylaws to be specific about same-sex marriage and other LGBTQ issues.

“The fact our church a few years back ordained a gay deacon, it put us on the radar screen,” Jordan said.

That deacon, Theron Clark-Stuart, also married his husband, David, at the church in 2015. It was one of the largest wedding ceremonies ever held there. He no longer actively serves as a deacon — deacons have three-year rotations — but is on the finance committee, teaches Sunday school and sings in the praise and worship band where his husband plays trombone. He’s also an ordained Baptist minister and pastored for 18 years before coming out as gay.

He said he always backs an organization’s rights to set their own standards and guidelines if they don’t receive government funding.

“That said, it’s not very Christlike,” Clark-Stuart said of the Metro Baptist Association’s decision. “We are called not to be Baptists, we are called not to be Lutherans or Presbyterians, we’re called to be Christians, and Christian means little Christ. If you want to be like Christ, you really need to love everybody and that means include and affirm everybody.”

Clark-Stuart added, “It’s a fairly evangelical group, and the evangelical movement is shrinking rapidly. The southern Baptists are shrinking because of their inability to love people who are not just like them.”

He said the decision of the Metro Baptist Association “saddens me.”

“I’m disappointed that they would exclude people that certainly Jesus would never exclude,” Clark-Stuart said. “I’m saddened because people are so afraid of growing in their faith. Fear causes us to exclude people. It causes us to alienate and put barriers between ourselves and others. Fear drives out love. That’s what I see happening and it’s sad because I have a strong Baptist heritage and I’m proud I grew up a Baptist. I’m sad they did this. I still love them. They’re still my brothers and I still love them. I have biological brothers who haven’t spoken to me since I came out 20 years ago, but I still love them.”

Pastor Jordan has largely taken the expulsion in stride. It isn’t the first time the liberal-leaning Decatur congregation has gotten crosswise with more conservative Baptists. In 2009, the Georgia Baptist Convention severed its 148-year affiliation with the church after it named a woman — Julie Pennington-Russell — as its pastor, according to the Associated Baptist Press. Jordan said after the initial pushback from more conservative members over naming a gay deacon, “The church just moved on or moved forward.”

“Since then we’ve had more gay deacons,” Jordan said. “We have a transgender deacon. I’ve done same-sex weddings. I’ve been pretty clear about our stance.”

“And I said, ‘Well, this is not our issue, it’s your issue,'” Jordan recalled.

The meeting occurred in November. Baughcum sent a letter to Jordan dated Jan. 31 announcing the church of the group’s decision.

During a Sunday sermon, Jordan used the letter he received from Baughcum as a talking point. The message?

“How can we be the light of the world?”

“We’re trying to let the light of the world shine, but people do things to make us feel ashamed and try to put us down,” Jordan said, recalling his sermon.

But he got a round of applause from the congregation when he told them what he told Baughcum at the end of their November meeting.

“Would you do me a favor?” Jordan asked Baughcum. “When your churches exclude people who you say are ‘misaligned’ biblically, please send them our way and we will welcome them with open arms.”

Here is the letter the church received from the Atlanta Metro Baptist Association: 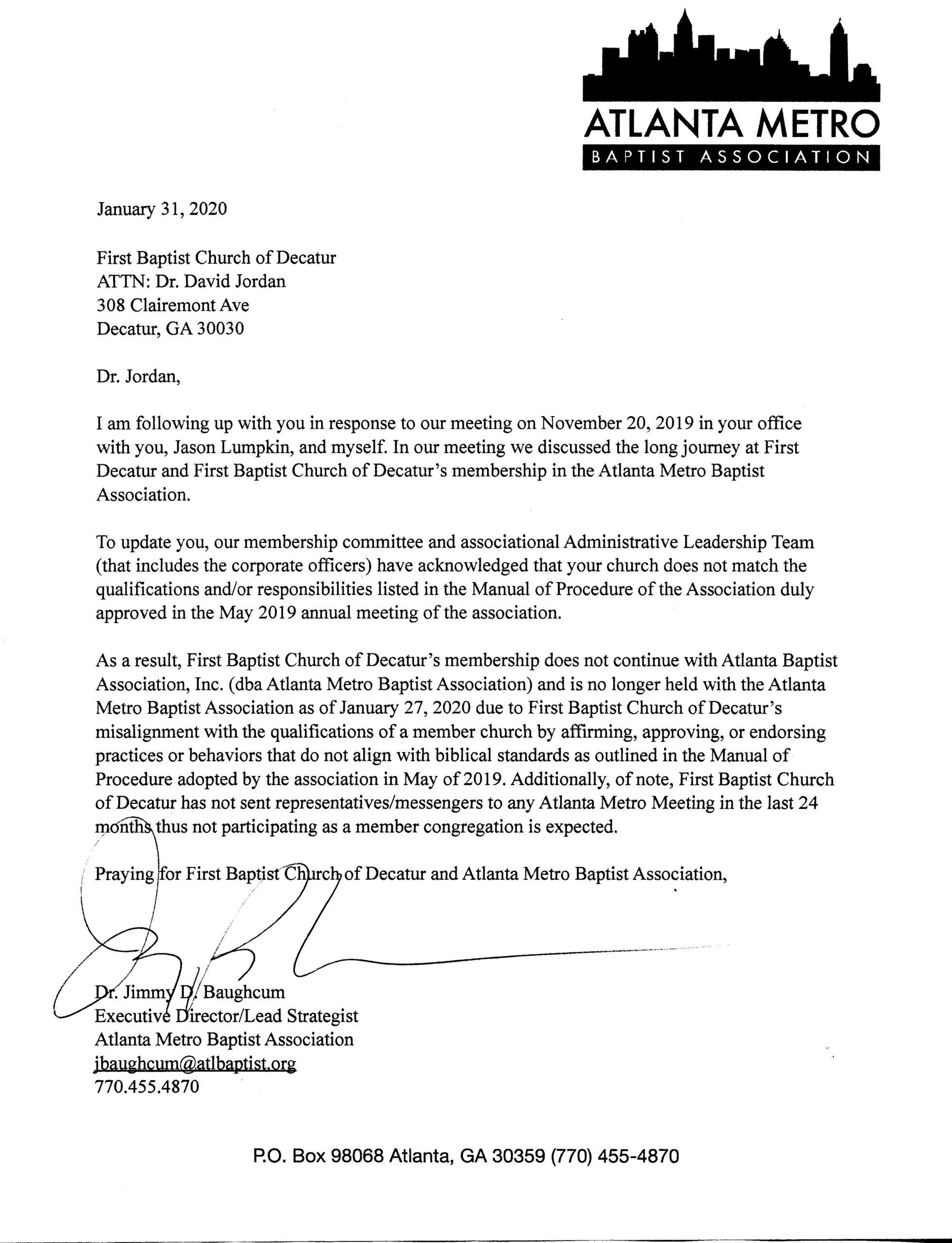