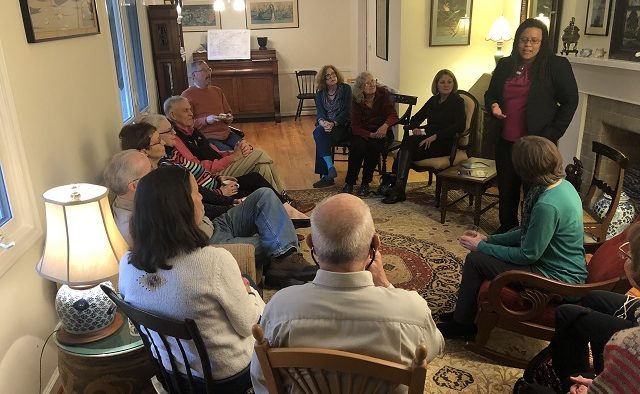 A first-time candidate for the Georgia State Senate, Kim Jackson, is running to fill the seat vacated by Senate Minority Leader Steve Henson, who is retiring at the end of the 2020 legislative session.

According to a campaign announcement, Jackson launched her campaign last July. The announcement notes that Jackson is “an Episcopal priest from the rural South who made Georgia home more than 10 years ago.”

Jackson’s campaign is based on her advocacy for a number of issues, including food security, helping the homeless, finding alternatives to the death penalty, reducing stigma around both reproductive justice and HIV/AIDS and expanding access to quality early childhood education and health care.

“I am honored by the early endorsements, humbled by the team that supports me and excited about the trajectory of the campaign with Chism Strategies on board,” Jackson said in her announcement. “This campaign is about more than me as it is about advocating not only for the people of my district, but for all Georgian’s to have a cleaner, healthier and more just Georgia.”

Jackson graduated from Furman University before receiving her Master of Divinity. Currently, she is the lead pastor of a church for the homeless and leads the vigils at the state capitol before every death penalty execution.

In addition, Jackson serves on an Emory School of Public Health research advisory board that explores ways to reduce stigma in Christian communities around reproductive health and on a Georgia State School of Public Health advisory board for black church leaders working on reducing stigma in black church communities around HIV/AIDs.

According to her campaign, in 2018, the Georgia House of Representatives commended her for her “tireless efforts on behalf of the disenfranchised, disenchanted, and dispossessed.”

Jackson, who lives with her wife, Trina, has been endorsed by a number of LGBT political advocacy organizations, including the LGBTQ Victory Fund and Georgia Equality. She’s also been endorsed by Run for Something, an organization that recruits and supports young progressives, and the GA Win List, a political action committee that supports Democratic women running for the Georgia General Assembly.

Jackson’s senate district, District 41, includes the cities of Tucker, Clarkston and Stone Mountain. The primary election will take place on May 19, 2020.

Editor’s note: If you are running for office in the 2020 elections, please send your campaign announcements to [email protected] Be sure to include a photo.