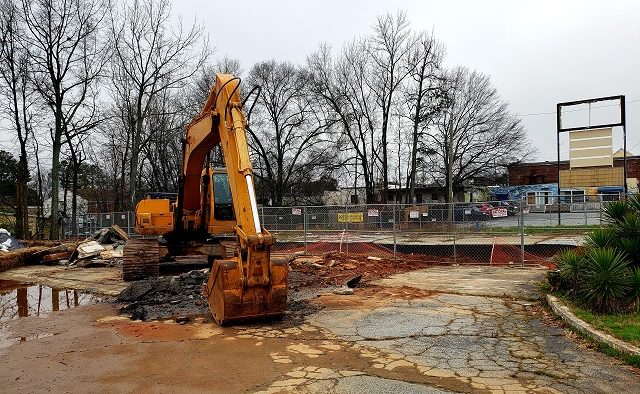 On Feb. 17 at 1 p.m., an excavator was at the site of a Sinkhole in Tucker, but it wasn’t being used when a reporter visited. Photo by Dan Whisenhunt
Share

Update: On Feb. 18, a GDOT official said, “The encroachment permit was received and approved.” Here is our earlier story …

Tucker, GA – A massive sinkhole in Tucker is the root of an ongoing legal battle between Tucker Tire owner Larry Phan, property owner Mark Chen, and the Georgia Department of Transportation.

However, the parties do not agree about the details of what’s happening at the property located at 4147 Lawrenceville Highway.

The city of Tucker says a contractor and excavator are scheduled to begin filling in the sinkhole on or before Feb. 17. On Feb. 18, GDOT confirmed it had received and approved this permit.

On Feb. 17 at 1 p.m., an excavator was at the site but it wasn’t being used when a reporter visited.

Decaturish obtained copies of legal documents, including Phan’s complaint against Chen and GDOT. The documents alleged that a faulty stormwater pipe, in place since 1984, is to blame for the sinkhole. The pipe and associated drainage system were not regularly inspected or maintained by GDOT.

A large pile of dirt is on-site to fill in the sinkhole, which is dangerously close to the state highway. 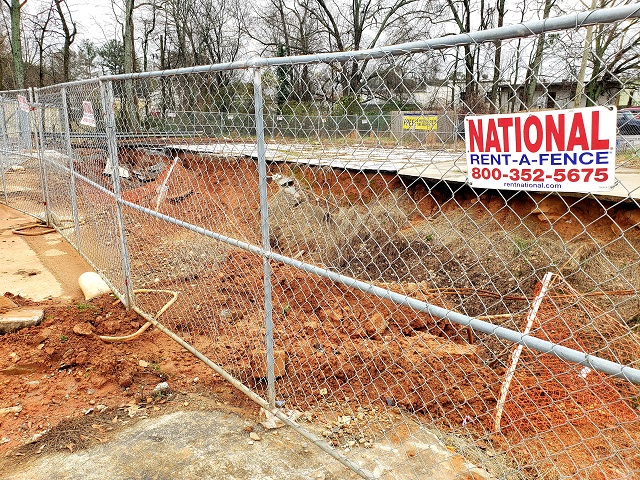 A sinkhole on Lawrenceville Highway in Tucker is surrounded by a fence. Photo by Dan Whisenhunt

According to Phan, a sinkhole in the same exact location as the one on-site today was once repaired by GDOT in April 2015; Chen says it was 2016.

Phan’s lawsuit says, “That sinkhole was repaired with backﬁll and concrete, however, it appears that GDOT did not correct the cause of the pavement collapse and inspect or repair the deteriorating storm pipe. As a result, soil piping around the interface of the pipe or within the pipe occurred and as the soil piping increased, internal voids within the soil matrix were created and enlarged. The enlargement of these voids ultimately caused collapse of soils, pavements and other structures.”

The lawsuit blames the sinkhole on GDOT failing to regularly inspect and maintain the stormwater drainage system at the site.

A letter from Chen’s attorney states, “[In 2016], a sinkhole ﬁrst appeared on the Subject Property as a result of the constant and repeated storm water runoff being carried through GDOT’s drainage system underneath the Subject Property. GDOT’s employees inspected the sinkhole and attempted to repair it. GDOT backﬁlled the sinkhole with gravel and poured concrete on top of the gravel over the course of several days.”

In May 2017, Phan found the current sinkhole, which is encroaching on a state highway. The sinkhole was located at the northwest corner of the Tucker Tire building. It was four feet wide.

The discovery touched off rounds of finger-pointing. According to the claim, from May 5 to June 26, 2017, Phan reached out to Chen, GDOT, DeKalb County, and the city of Tucker to try and have the sinkhole repaired.

During that time, the sinkhole grew from four feet to 20 feet wide, and it grew significantly deeper. Yet, no repair work was done.

In June 2017, the city of Tucker issued a notice of violation to Chen, to “please repair sinkhole in parking lot,” and DeKalb County Fire Marshall deemed the property unsafe.

Allegedly, a GDOT engineer inspected the sinkhole and the collapsed storm water pipe between May 5 and July 7, 2017.

Tucker Tire has not been in operation since June 2017.

In August 2017, Chen filed a complaint against GDOT “for its failure to effectively repair the drainage pipe in 2015 and its failure to adequately maintain the drainage system under and around the Subject Property.” Chen sought $1 million for lost rent; fencing and barricades around the sinkhole; loss of fair market value of the property; engineering services; and peace of mind.

Chen’s claim states GDOT employees stalled by passing the problem to other employees. Allegedly, GDOT failed to perform any repair or maintenance activity, despite knowledge of the sinkhole and foreseeable danger to its own drainage system associated with it.

In November 2017, Chen terminated the lease for Tucker Tire.

In a letter dated Jan. 23, 2018, the Department of Administrative Services, on behalf of GDOT, denied Phan’s claim. “GDOT is not responsible for the pipe that burst. Our engineers have informed your client that once the pipe is repaired by your client, GDOT will be able to pave the road.”

In February 2019, the Tucker Tire building was demolished, and Phan filed a civil claim against GDOT and Chen.

By April 30, 2019, GDOT was dropped from Phan’s claim. Litigation is ongoing.

On Oct. 19, 2019, City of Tucker filed a consent order demanding $459,000 in fines from Mark Chen for refusing to properly control erosion and water run off; failure to maintain a parking lot to avoid the existence of a sinkhole; and failure to cover an unused sign.

The consent order stated that if Chen met milestones to remediate the property by set deadlines, $450,000 would be forgiven.

According to minutes from the Jan. 27, 2020 work session, Tucker City Council held a “discussion on the start of construction on Feb. 17 [2020] on Tucker Tire, which has been permitted by both the city and GDOT, and the consent order with milestones issued by the Tucker Municipal Court.”

Permits were approved by the city and GDOT, and the contractor and excavator are scheduled to begin work on or before Feb. 17, 2020.

Tucker spokesperson Matt Holmes said, “When construction begins, the plans must be onsite. As construction has not yet commenced, they do not have to have plans posted.”

Holmes added, “… everything has been handled properly and proactively by our staff every step of the way. Our City Engineer [Ken Hildebrandt] approved a demolition permit, which is noted in our Building Department files. As to the question on further damage, the city worked with a consultant to examine the 3×4 concrete culvert under Lawrenceville Highway.”

Securing the encroachment permit is vital to the sinkhole fix.

GDOT spokesperson said the encroachment permit, “will allow the property owner to fix the drainage issues on their property as well as get within GDOT’s right of way as needed to properly complete the work.”