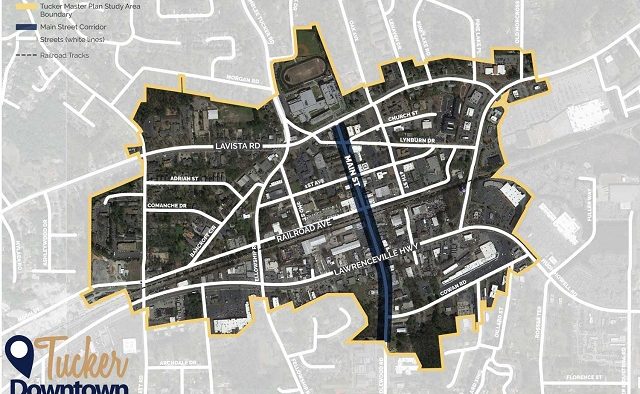 Tucker, GA – Tucker’s downtown master plan was unanimously adopted at the Feb. 10 City Council meeting, a plan more than a year in the making.

More than 600 residents participated in an online survey about the downtown master plan. Results show value in the historic, quaint feel of downtown Tucker and a desire for bike and pedestrian-friendly access.

Mayor Frank Auman said the plan will aid developers who pitch ideas to City Council. “Now we have something to go out and show the development community. We can tell them, ‘This is the kind of thing we want in these places.’”

Geoff Koski, president of Bleakly Advisory Group, said, “Over the next 10 to 15 years, as the demographic of the Baby Boomers will still be with us, the Millennials in 15 years will be starting into the empty-nester cycle. Right now, we are at the lowest baby birth rate in 50 years in America. All this to say that our households are shrinking. We are no longer an America of ‘Leave It to Beaver’ with two kids, two parents, on a big, single-family lot. In fact, we are headed the other direction… We are strongly advocating, in general, that we should be looking for new ways to build housing. New housing types. Because if we don’t, we are missing the boat.”

City Council member Anne Lerner said, “If we don’t have a vision or a plan, we are not going to move forward and we’re not going to get anywhere. I look forward to us using [the downtown master plan] as a new economic development tool.”

City Council also adopted a new ordinance on small cell facilities, mandated by the state in April 2019. After two years of negotiations, the ordinance establishes a process covering all aspects of permitting of 5G poles, antennas, and equipment in the city’s right of way.

The City of Atlanta and Brookhaven are in a legal battle with the federal government over this rule. For more information, click here.

Rip Robertson, the Tucker Parks and Recreation director, said with the help of DeKalb District 1 Commissioner Nancy Jester, DeKalb County is funding $80,796 for improvements in Henderson Park. A bridge will be added on the red trail, and a new dock will be built at the lake.