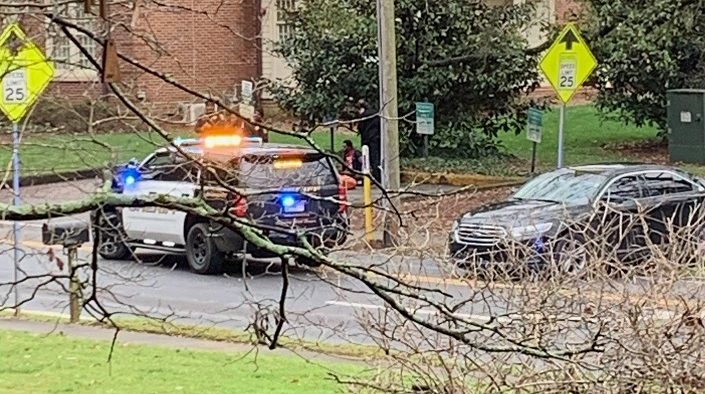 A photo from the scene South Candler Street on Feb. 8. Image provided to Decaturish.
Share

The DeKalb County Sheriff’s Office on Saturday, Feb. 8, arrested someone accused of being involved in a murder in greater Decatur.

The chase also resulted in a crash involving the suspect.

A person living near South Candler Street saw about seven or eight police vehicles in the area on Saturday afternoon. The chase temporarily shut down the road for more than an hour.

The Sheriff’s Office arrested Vincent Smith, who is accused of being involved in the Jan. 28 murder of Charles Lewis in greater Decatur. According to the Atlanta Journal Constitution, Lewis died following a robbery at an apartment complex in greater Decatur. The AJC reports that one suspect – Antonio Lee – has already been arrested.

DeKalb Sheriff’s investigators arrested 20 year-old Lithonia, Georgia resident Vincent Jamal Smith on warrants for Murder and Armed Robbery in connection with the shooting death of Charles Alexander Lewis on January 28, 2020 on Wesley Club Drive in Decatur. Allegedly, Mr. Lewis sustained a fatal gunshot wound to the leg during the commission of an armed robbery. On February 5, 2020, 18 year-old Decatur resident Antonio Lee was arrested on the same charges.

Mr. Smith was taken into custody after being located while he was driving a stolen vehicle on Columbia Drive.  While being pursued by investigators, Mr. Smith allegedly hit another vehicle.  He eventually crashed the vehicle he was driving and caused minor damage to sheriff’s vehicles involved in the pursuit. Mr. Smith was transported to the DeKalb County Jail without further incident.

The City of Decatur Police Department is investigating the traffic incidents.