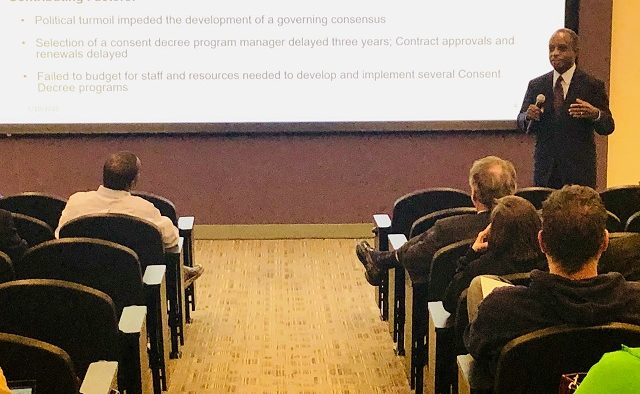 Dekalb County CEO Michael Thurmond addresses Dekalb residents about the sewer system issue along Green Street and the county’s plans to fix it. Green Street has already finished Phase 1 of the rehabilitation project and this week will start repairing and replacing sewer piping along Green and South Candler streets. Photo by Gabriel Owens
Share

DECATUR, GA – In a March 10 meeting at Agnes Scott College, Dekalb County officials presented plans to fix the aging and deteriorating sewage and drainage system on Green Street in Decatur, while also admitting to past mistakes and the need for service in other areas of the county.

Green Street is one of the worst sewer spill sites in the county, with 22 spills since 2012.

DeKalb County CEO Michael Thurmond admitted the county had “been ignoring the problem for over 30 years.”

County officials and project managers proceeded to lay out the three-phase plan for Green Street. Phase 1 of the Green Street sewer replacement project had already been completed, replacing unsealed manhole covers (the types with finger/handhold holes) and other damaged covers.

The county will officially kick-off Phase 2 this week, beginning the process fixing about 670 linear feet of pipe on the north and southbound lanes between South Candler and Green/Burton streets. The total length of piping to be replaced is about 1,800 feet, according to Project Manager Tiffany Ware.

The work will require lane closures of sections of South Candler Street between Green Street and Bruton Street. The closures will be from 9 a.m. to 3 p.m. and these sections of the road are expected to reopen on Friday, March 13.

Additionally, the county will be looking for areas that have yet been recognized for repair. Phase 2 is expected to end in fall of this year.

Phase 3 will be mostly follow up, looking for areas missed during the project and ones that could be improved.

The cost of the rehabilitation project is $1.2 million dollars, according to county officials.  The county pumps over 12 billion gallons of sewage a year.

The county officials finished their presentation and took questions from the audience, which showed further flooding and sewage worries in other areas of Dekalb not mentioned in the presentation.  Thurmond admitted it would take a while to get to them all, saying in his estimation, complete rehabilitation of Dekalb’s sewers would take “about seven years.”