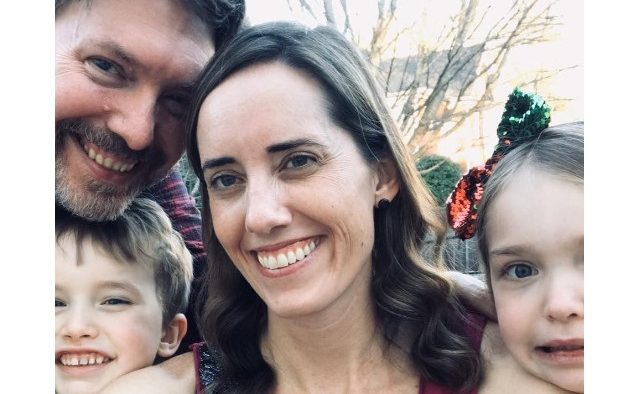 Chesney D'Avis is a mom at Glennwood Elementary and likely has COVID-19. Image obtained via Facebook.
Share

Decatur, GA – Lisa works at a local hospital and lives in Decatur. Her husband, a doctor, works in an emergency room.

She asked that we only use her first name. She first noticed her swollen lymph nodes over the weekend. Lisa felt tired. From there it escalated to a very sore throat, a 100.4-degree fever and eventually tightness in her lungs like someone was sitting on her chest.

“Tuesday, I had a fever in the morning which broke by the afternoon,” Lisa said. “Wednesday, the fever was gone but my chest felt worse and I had a dry cough.”

Her husband, drawing on his first-hand experience with the pandemic, felt strongly that his wife had coronavirus.

“There is also another family in the neighborhood with a child in my younger daughter’s first-grade class that are quite ill,” Lisa said.

That would be Chesney D’Avis’ family. D’Avis has had a rough go of it and wound up in the hospital but now is recovering at home. She spent almost a decade in CNN’s international newsroom as a writer. She isn’t shy. She wants people to know what has happened to her.

“There shouldn’t be a stigma,” she said. “I’m fine going public.”

Both women are moms with children at Glennwood Elementary. That school is closed like nearly every other school in Atlanta because of the COVID-19 pandemic.

Their stories offer a candid view into a phenomenon that has upended life as we know it. There are 197 confirmed cases as of March 18 and at least three deaths, with a possible fourth death at an Emory Healthcare facility. The virus has moved through the community like an invisible wrecking ball, toppling the local economy, particularly the local restaurants. While the government talks bailouts, local restaurants are laying off employees and bailing them out by asking for Go Fund Me donations to get them through the hard times. How long the hard times will last can’t be predicted with certainty.

Members of local congregations have stopped worshipping together. Local governments are holding their meetings via live stream and conference call. People walking on neighborhood streets steer clear of each other while waving and smiling harder than they usually do.

And yet, it’s that awkward and economically painful social distancing that saves lives.

D’Avis has an underlying medical condition that has put her at greater risk.

“I have asthma and it has been a nightmare,” she said. “Really treatment-resistant.”

She isn’t the only one in her family with an underlying health condition.

“My daughter, Kathryn, a first-grader at Glennwood Elementary, has heart disease and a critical airway,” D’Avis said. “Despite the best containment efforts of myself and my husband, both of our children caught it.”

But the children didn’t get the worst of it.

“An illness that brought us to our knees has left them with slight fevers and bad attitudes,” she said.

She was first tested for coronavirus at a local medical facility on Friday, March 13. What she saw there scared her.

“There was no quick, efficient drive-through,” D’Avis said. “No hazmat suits, just masks and gloves. The doctor who swabbed me had a piece of protective plastic covering over her eyes, like a windshield. The swab in the throat was easy. The nose hurt. I kept my distance from the two other patients. The first, in his mid-forties, appeared nervous but cough-free, like me. The second, in his late twenties, had a deep, persistent cough that made his whole body shake. He looked terrified.”

The experts assure us that the younger and healthier you are, the less likely you are to find yourself in an emergency room. According to the Department of Public Health, people aged 18 to 59 are most of COVID-19 cases in Georgia right now, with 43 percent of confirmed infections. People older than 60 are the next largest group, with 39 percent of people infected.

D’Avis was rushed by ambulance to a local hospital on Monday. She was in respiratory distress.

It was not her first trip to an emergency room.

“Since developing an upper respiratory tract infection at the beginning of the month, much of what I’ve seen has scared me,” D’Avis said. “When I walked into the ER with a raging cough and low oxygen …, no one immediately put me into isolation. There was no COVID-19 representative there to answer my questions. The kind physician who tested me assured me that we are prepared; that our community will look nothing like Italy, where hospitals have run out of ventilators. But physicians are trained to project calm. What I have witnessed is our efforts are falling short.”

A lack of testing

On Monday, D’Avis was reassured by the ramped-up safety measures put in place, including a respiratory isolation wing. An infectious disease doctor at Emory thinks she has COVID-19, based on the severity of her symptoms. But the window to receive test results has come and gone and the Health Department hasn’t called with the results.

Lisa couldn’t get a test.

“I made a tele-appointment with my doctor,” Lisa said. “I got in quickly. She told me that based on my symptoms I could assume I have the coronavirus, but she also said that they know of no reliable way for anyone to get a test. She had heard rumors about a place in Buckhead, but I had already checked that out and when I called, I couldn’t get through. She said they are telling people to quarantine for 14 days and avoid the hospital unless they are having trouble breathing.”

She was told emergency room, intensive care unit and other frontline staff also are at the head of the line to be tested. That includes her husband who is well, for now. But the things he’s seeing should give everyone concern, Lisa said.

“He’s concerned because the ICU beds are already at capacity throughout most of the city and the staff is getting sick,” Lisa said. “It’s not just about beds. It’s also about the staff. It’s scary. Frankly though, having this, makes it feel a little less scary. I’m okay. I’m young. I’ll be fine. It’s just so important that we isolate those who won’t be all right.”

Lisa doesn’t need hospitalization but remains quarantined in her basement. When her husband is at work, her 12-year-old daughter manages the house and takes care of her 7-year-old sister and keeps her on a school schedule.

They aren’t completely on their own because the community has stepped up, too. Friends and neighbors have dropped off meals, picked up a computer for her daughters at school and delivered medicine. Her oldest daughter drops the meals off at Lisa’s door.

While social distancing can be a little depressing, Lisa is glad she hasn’t seen some of her more vulnerable relatives recently.

“I’m so grateful that I haven’t seen my mom and 100-year-old grandmom in over two weeks,” Lisa said.

No fear vs. It’s here

But for some people, it still isn’t a reason to withdraw from their social life. There are still people going on about their routines, like retired Decatur High School social studies teacher Chris Billingsley, who made a point to celebrate St. Patrick’s Day on March 17.

“I went to the Square for the usual things, lottery tickets, check monuments and for today only, a stop at the Brick Store Pub for a pint of Guinness,” Billingsley said. “I found the Brick Store shuttered like an Atlanta area Catholic church on Sunday (for the next three weeks at least so says the archbishop) but the real Irish pub on the Decatur Square was open. While enjoying my pint, a young couple walked in and they told me, ‘just married!’ That’s what I call no fear! Later in the cemetery for a quick walk, I found an Irish flag on one of the most famous graves in Decatur, Adam Doyle. ‘Born in Ireland’ and mighty proud of it!”

Decaturish urged Billingsley to take this seriously and stay away from public spaces. He appreciated the concern, but concluded, “Most people I know are not letting this rule their lives.”

“All of us need to enforce strict social distancing to the best of our ability from now on,” D’Avis said. “Some evidence suggests the confirmed numbers only represent a fraction of the infected people. If that’s the case, social distancing will play a major role in bringing the numbers down and not overwhelming the medical system.”

She added, “The only thing we know for certain about COVID-19 is there’s a lot we still don’t know. A New York Times article recently described a young female doctor in China who succumbed to the virus. Though it targets certain populations more aggressively, everyone is vulnerable. I felt this acutely while getting tested, realizing I wasn’t the youngest person there.”

“I personally know several people who have it and I don’t know that many people,” Lisa said.

Lisa said you don’t need to know anyone who is personally sick from coronavirus to catch it.