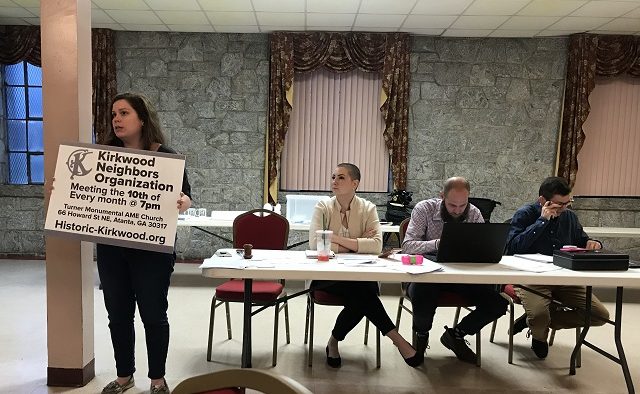 Atlanta, GA – The Kirkwood Neighbors’ Organization met on March 10 to discuss transportation issues, the winter holiday celebration and an ordinance from the Atlanta City Council that would change the structure of the neighborhood planning unit system.

Transportation Committee Chair David Warren gave an update on the Georgia Department of Transportation’s plan for a street crossing at Arkwright Place and Moreland Avenue that “would remove a stoplight and require pedestrians and bicyclists to go 200 feet out of the way to cross,” Decaturish previously reported.

GDOT has withdrawn its current design for Moreland Avenue and will work with the Atlanta Department of Transportation to come up with a new plan, Warren said.

“Where MARTA doesn’t meet the metrics to build bus stops we’re going to build some benches ourselves. First one being at Hosea [Williams Drive Northeast] and Warren [Street Northeast],” Warren said.

He added that the committee is looking into adding trash cans by the benches and will pour enough concrete for a bench and trash can. The committee is planning to have a volunteer build day on Saturday, March 28. The time is still to be determined.

Warren also asked for approval to send a letter to City Councilmember Natalyn Archibong, Councilmember Dickens, the commissioner of the department of transportation and the chief bicycle officer. The letter would ask for improvements on a plan to resurface DeKalb Avenue.

The letter would ask the city to extend the length of the bicycle track, improve where it will be at Moreland Avenue and move the bicycle lane to the curb-side of the road rather than in the middle of the road.

“We want to improve the safety for people in all modes of transportation,” Warren said.

— Sarah Assalti is chairing the Kirkwood Winter Holiday Celebration and KNO approved $3,000 to support the project.

“[In] 2013 and 2014, we had a tree lighting ceremony downtown right on Hosea [Williams Drive Northeast] between Howard [Street] Northeast and Kirkwood [Road Northeast], and we want to bring it back,” Assalti said.

The money would go toward security, a liquor license, advertising and other miscellaneous things, Assalti said. She will also put up the money first and then submit receipts and invoices to be reimbursed by KNO.

The event will feature a music stage that will showcase local school choirs and potentially choirs from various places of worship.

“The idea is that this is truly a community festival,” she said.

There will also be vendors selling homemade wares, along with Santa who will be available for free pictures. Additionally, the celebration will include a craft, storytime, s’mores, hot chocolate and other seasonal drinks and a tree lighting.

The celebration will take place in downtown Kirkwood on Hosea Williams between Howard Northeast and Kirkwood.

— KNO also discussed an ordinance proposed in the Atlanta City Council that looks at the neighborhood planning unit system.

The ordinance states that the adjustments to the code will “improve meeting management and the engagement of citizens, ultimately increasing membership.”

The statement of policy and purpose in the ordinance says that “[t]he council finds that it is in the public interest for the City of Atlanta to have an organized program of neighborhood planning. It is the purpose of this article to provide an opportunity both for the citizenry formally to provide input into the comprehensive development plan of the city and to provide a means by which information concerning the operation of city government can be provided to the citizens of Atlanta.”

Marcus Owens, former chair of the NPU-O, said the legislation seeks to put more structure around the NPU system.

“So they’re putting some additional constraints around the NPU specific to how the voting is done, how the board is made up, the kind of qualifications and training that the board needs to have, the way the bylaws are done, things like that,” Owens said.

Owens mentioned that there are some good things in the ordinance.

“It codifies a lot of things that aren’t kind of put in place right now around what an NPU should look like, how it should be made up,” he said.

He added that some areas, such as Buckhead, have an issue when neighborhoods are in multiple NPUs and the ordinance clarifies that.

“Then it actually puts the elections clerk in charge of NPU elections which is awesome because as an NPU officer I can tell you how terrible it is trying to run a fair election, especially when you’re up for election, etc,” Owens said.

Owens mentioned that he is against the ordinance and said the problems he has with it regard the requirements it puts on the officers serving on the board.

– “All NPU boards should be uniform and consist of a chair, vice-chair, secretary, parliamentarian, and one designee from each registered neighborhood association (with monthly public meetings) within the NPU boundaries.

Owens said the training requirements are great and it’s something he will go after but said he is able to do this because he works from home and some of the meetings are on a Thursday at 3 p.m. He said that is not a feasible time for the type of volunteer system the NPU-O has.

Owens also thinks the ordinance will penalize organizations like KNO since a lot of NPUs don’t have a strong neighborhood organization system underneath them.

Owens also added that “the remediative measure for this is, is if your board’s not filled or you haven’t met all of these requirements it basically says the city can come in and take over the NPU.”

The NPU-O will vote on this ordinance at its next meeting at 7 p.m. on March 24 at Branham Recreation Center, 2051 Delano Drive. The KNO voted to inform the NPU-O that the organization is opposed to the ordinance as written.

The next KNO meeting will be at 7 p.m. on April 10 at Turner Monumental AME Church, 66 Howard Street NE.