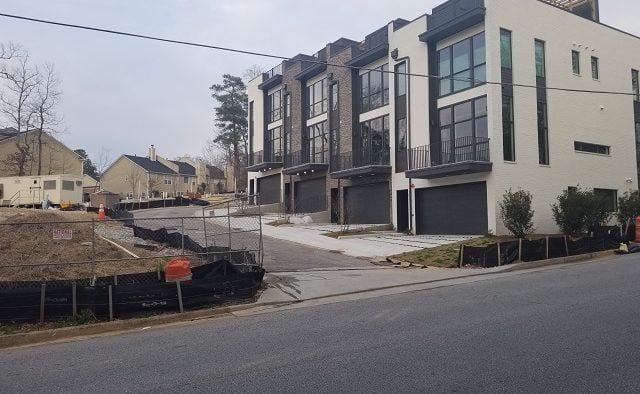 Some of the townhomes under construction near the corner of Church Street and Forkner Drive. Photo by Cathi Harris
Share

Decatur, GA – Construction of a large townhome development at the corner of Church Street and Forkner Drive in Decatur that began in 2015 is still in progress, albeit at a much slower pace than the developers or the city anticipated.

Although most of the first phase of the townhomes was completed and sold in 2017 and 2018, development stalled toward the end of 2018 and into 2019, city and county records indicate. Since 2018, only two other units have been completed, with one receiving a certificate of occupancy on Dec. 16, 2019, and another slated for inspection on Feb. 13 of this year.

Of the 33 townhomes originally planned for the development, 14 have been completed and granted certificates of occupancy.

“A new contractor — the third builder contractor — has been approved to begin work on the site,” John Maximuk, the city’s director of design, environment and construction told Decaturish recently. “A stop-work order had [previously] been in place to address some issues that had arisen during the time between contractors.”

The delays at Moda Decatur and other townhome developments across metro Atlanta were the focus of this Curbed Atlanta article highlighting the months or years-long delays many townhome buyers face when purchasing in this market.

That article detailed the experience of two families who ended up breaking their purchase contracts with the developer of Moda Decatur, St. Clair Development, due to what they felt were unacceptable delays, poor communication, and unexpected additional charges.

Aside from the concerns of the buyers, residents of the surrounding neighborhood have also expressed concern about the negative impact of the extended ongoing construction to the city and to the neighborhood.

“I have been worried about the city being left holding the bag in the event that there is a downturn in the economy and they cannot finish it,” says Neil Norton, an arborist who lives around the corner from Moda. “If this is what is going on and it is a good economy, what could happen? Will the city and, ultimately, the taxpayers, end up responsible?”

Norton said he has been observing the site periodically since construction started and said it appears that the new contractor is doing the interior work for the second phase of the development, but that no major additional construction has taken place.

“They seem to be finishing the interiors of the 16 or 18 or so that have been built, but other than that there has been almost no movement,” he adds.

Neither representatives of St. Clair Holdings nor Merrill Kaufman, the realtor listed as the agent for the Moda Decatur townhouses, responded to calls or emails seeking comment for this article.

Developers in a tight spot

A serious labor shortage, record-setting streaks of rainy weather in 2018, and rapidly rising costs for raw materials are the likely culprits behind the Moda Decatur delays rather than “anything nefarious” on the part of the developer, Tucker real estate attorney Todd Poole believes.

Poole represented one of the Decatur families who was released from their contract to buy after waiting more than a year for their townhome to be finished.

“They [St. Clair] were very accommodating about sending back the deposit and extra payments [for upgrades],” Poole said.

Unfortunately for frustrated home buyers, it can be difficult to tell what’s behind the delays, Poole says.

“In my construction experience, there are two primary reasons why a development like this gets so far behind,” he says. “One is the innocent one where they either too aggressively scheduled or they correctly scheduled, but then had issues with getting subcontractors. … The second situation is when the developer is over-extended and using money from the new development to finish a prior project.”

The latter situation can be very hard to prove without expensive litigation involving multiple buyers getting together to pursue the issue.

In Moda’s situation — because there have been multiple contractors — it signals that it is probably more of a scheduling issue due to the shortage of skilled subcontractors available, he says.

“There is an extreme labor shortage right now in terms of subcontractors who are skilled enough to do this kind of work,” Poole says. “If you are one of the huge homebuilders, you can go to subcontractors and say, ‘You are ours for the next year.’ They have enough work to keep them busy.”

But for smaller and medium-size developers like Moda, which is local to Atlanta, it has gotten extremely difficult because they may need a plumber for three days for one phase of a development and then won’t need a plumber again for six months, Poole explains. Adding in the rapid escalation of costs for materials and many general contractors are caught between a rock and a hard place.

“If you are a sub in this market, you have more work than you can handle. But if you are a GC, it is very tough,” he explains. “You are trying to estimate jobs that are expected to take nine months to a year, but you don’t know if your costs are going to increase 10 to 15 percent or more over that time and whether you will be able to find the subs when you need them.”

Even if the developer were in financial straits and unable to finish the development, it is virtually impossible that the public would end up responsible for the property, Poole says.

“There is no way that development won’t be finished because that location is just too valuable,” he explains. “If [St. Clair] were not able to, then someone else would buy it and go in and finish it.”

What can the city do?

The city has a section of its Unified Development Ordinance (UDO) that allows for fines to be levied against developers with expired permits, says Maximuk, noting that the Moda’s current permit is still valid. The measure is meant to encourage builders to complete the projects on time.

That section of the UDO reads:

For “construction, alteration, additions to or repair of residential buildings of more than four dwelling units and all commercial, industrial, institutional and other types of construction: A building permit under which the work is not completed within 24 months after issuance shall expire by limitation and a new permit shall be secured before the work is continued. An additional fee equal to twice the amount of the fee for the expired permit shall be required prior to issuance of the new permit.”

“Currently, the property developer is within its building permit time frame,” Maximuk says. “The city maintains basic property code compliance no matter if there is development occurring or not. That may include security concerns, site perimeter maintenance, and trash pickup.”

The city has worked with all three of the contractors that have been on the Moda Decatur project to ensure that the project meets city building standards and is built to plan, he adds.

Last of its kind?

Although he admits to initial opposition to the development when it was proposed, Norton says he hopes to see it successfully completed.

“I don’t want to sound like I am opposed to townhomes or density near me or anything like that,” he says. “I know [when it started] many neighbors had concerns about traffic, stormwater and parking, in addition to our concerns about the trees.”

He also believes that this has hurt the neighborhood relationships as the new townhome owners have felt the neighbors’ displeasure over the continued delays has been directed at them.

“They are our neighbors and I have been so happy to have them and I think the homes are good,” Norton says. “My issue was just with the way that it was done, initially, and then with the lack of landscaping and the attention to the site under construction.”

In the future, however, he says he would like to see the city be more creative with their conditions for permitting higher-density housing to include more protections for the tree canopy as well as understand ways to permit denser housing that were less intrusive than what occurred at that site.

“They just disturbed every square inch of that property, when there are ways that you can construct higher density that don’t involve that much removal,” he adds. “It’s about the footprint and the overall impervious surface. You could have a 100-unit, 10-story building that would have preserved more of the greenspace than this did.”

Whether future development will do so is still in question, but it is almost certain that future townhome developments in Decatur will be different than this one.

As previously covered by Decaturish, the city updated its UDO in 2017 to prohibit some elements common to many of the older townhome communities in Decatur, including some along Church Street now.

Under the newer ordinance, future townhome communities cannot, for example, have new public roads, have homes that face the interior of the site and cannot have garages that face the street. Because Moda Decatur’s site plan was approved before the changes were implemented, they are still subject to the requirements of the previous version of the UDO.

Developments that were approved after 2017 will conform to the newer requirements.