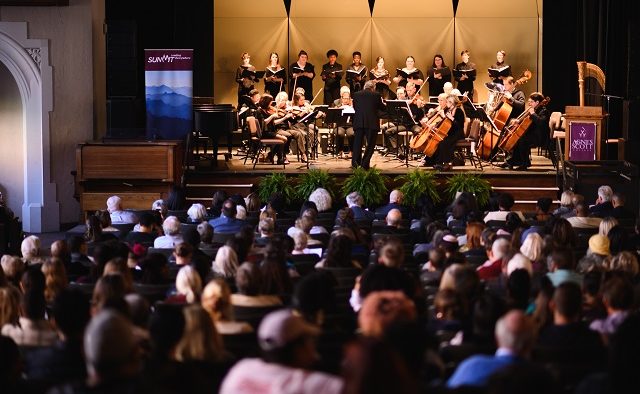 Decatur, GA – Although not an official holiday in the United States, International Women’s Day, is celebrated on March 8 each year around the world as a united point of convergence in the women’s rights movement. For the 2020 observance of International Women’s Day, the Atlanta Symphony Orchestra and Agnes Scott College came together to present a concert to celebrate the “Mother of the Civil Rights Movement” Rosa Parks as part of the ASO’s “Around the A” series of free community concerts.

The concert took place at Agnes Scott College on Sunday at 4 p.m., in Gaines Chapel in Presser Hall, with 21 musicians representing the Atlanta Symphony Orchestra, the college’s Sotto Voce Choir directed by Brittney Boykin, and more than a handful of additional guest artists. At the same time as the concert in Gaines Chapel, in the adjacent long hallway of Presser Hall’s main floor was an exhibit of paintings by visual artist BiLan Liao.

Words of welcome in honor of the occasion were given at the top of the concert by Leocadia I. Zak, President of Agnes Scott College; Juan Ramírez, a conductor and ASO violinist who served as Programming & Artistic Director for the event; Rhea McCauley, niece of Rosa Parks; and Carmen Lombardero Bernal, Georgia State University’s 2020 Adjunct Professor of the Year.

Leading off the introductory remarks, President Leocadia I. Zak placed a special emphasis on the institution’s distinctive SUMMIT program, its groundbreaking approach to a liberal arts education.  “Agnes Scott College’s signature program, SUMMIT, prepares our students for global awareness and leadership development,” said Zak. “SUMMIT is infused into every aspect of Agnes Scott, including our curriculum. Our students begin to embrace SUMMIT’s leadership and global pillars from their first days on campus and continue to do so through their senior year. With SUMMIT in mind, it is appropriate that Agnes Scott is hosting this concert, which is focused on a national and international civil rights icon, Ms. Rosa Parks, and other global women leaders.”

The music kicked off with a work composed by a woman composer of the Baroque era, “Madre la de los Primores” by Juana Inés de la Cruz (1648-1695), a villancico (an Iberian vernacular musical and poetic form) for four treble voices and strings. A Hieronymite nun of New Spain (Mexico) during its colonial period, Sor Juana was not only a composer but also a poet and philosopher whose outspokenness earned her the nickname “Mexican Phoenix.”

The program then turned to music of the African Diaspora in America, first with four African-American spirituals: “Nobody Knows the Trouble I’ve Seen” (sung by mezzo-soprano Minka Wiltz), “Michael Row Your Boat Ashore,” “Kum ba Ya” and “Every Time I Feel the Spirit.” On their heels came a group of four rags by African-American composer and pianist Scott Joplin (1868-1917) from “The Red Back Book” –  a collection of Joplin rags arranged for the New England Ragtime Ensemble by Gunther Schuller and others: “The Entertainer,” “The Chrysanthemum,” “The Cascades” and “Maple Leaf Rag.” 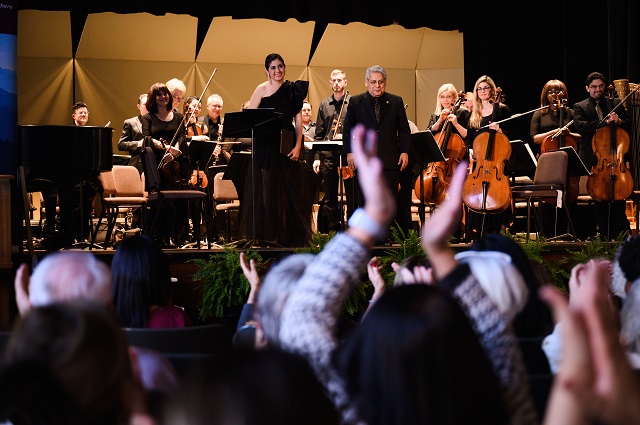 The first half of the program concluded with “Sombras” (“Shadows”) by Ecuadorian composer and pianist Carlos Brito Benavides (1891-1943). Sombras is a pasillo – a musical genre that originated Colombia but is regarded as the national musical style of Ecuador – written for soprano and orchestra, a setting of the eponymous poem by Rosario Sansores Pren (1889-1972). “Sombras” was sung by soprano Ana Karina Pegueros, backed by the ASO musicians. It was their last piece on the program. The second half turned entirely to solo and chamber music, much of it song.

Unfortunately, the body of musicians representing the ASO in the first half sounded under-rehearsed. It did not feel like one of their performances under normal circumstances. That was regrettable, especially given the concert’s larger purpose.

After a brief intermission, harpist Madeline Chen performed a solo, the world premiere of “Elegy” by the concert’s artistic director, Juan Ramírez. Then Ramírez picked up his violin to perform with pianist Choo Choo Hu, the “Romance, Op. 23,” by Amy Beach (1867-1944), who was the first successful American female composer of large-scale art music.

The program continued with three Cuban songs performed by soprano Ana Karina Pegueros and pianist Choo Choo Hu. The first two were by Ernestina Lecuona y Casado (1882-1951): “Junto al Río,” “Ahora que eres mía” (a cancion-bolero). The third in the set was “Al recordar tu nombre,” a cancion by Carmelina Delfín (her birth and death dates unknown, but the latter sometime after 1948).

The concert closed with a group of three songs with both lyrics and music by Maria Grever (1851-1951) (lyrics and music) for soprano, violin, cello and piano: “Cuando vuelva a tu lado” (1934), “Te quiero dijiste” (1930) and “Jiirame” (1926), performed again by Pegueros and Ramírez, joined by cellist David D. Ramírez and pianist Choo Choo Hu.

When all was said and done, in line with International Women’s Day the program had presented music by five female composers out of a total of eight composers – plus the spirituals of anonymous, community origin – with one of the works featuring poetry by a woman, though the musical setting by a man. Sunday’s musical programming leaned heavily upon Latin American creators, and one might have preferred a greater diversity of ethnic backgrounds.

There is, in addition, a panoply of song directly connected to the mid-twentieth-century Civil Rights movement, particularly among the followers of the Rev. Dr. Martin Luther King, Jr., with a diversity of racial origin and practice. These are all things worth further exploration before the next International Women’s Day comes around next year. The research would be well worth the extra effort.

Happily, there is another free concert celebrating the music of women coming up in the ASO’s “Around the A” series, just around the corner. “Listen: Works by Women” will be presented on Tuesday, March 17 at 8 p.m. at the Schwartz Center for Reforming Arts, featuring the Marian Ensemble – a group of women musicians from the ASO performing compositions by women composers. For more information about that free concert, visit aso.org/AroundtheA on the orchestra’s website.