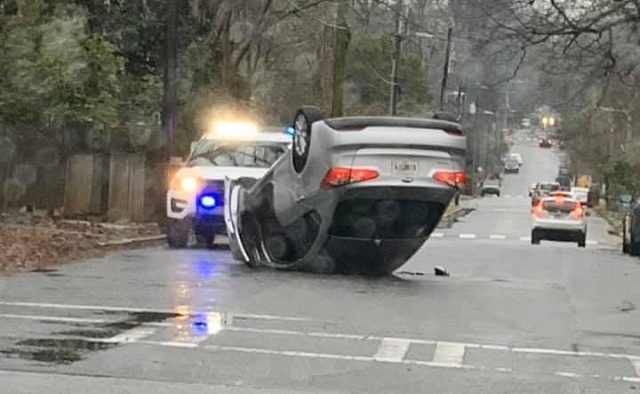 A March 2 crash resulted in a car flipping over in Oakhurst. Photo provided by Emily R. Weil
Share

Decatur, GA – A three-vehicle crash in Oakhurst resulted in one flipped vehicles and no injuries.

Decatur Police on March 2 at 4:09 p.m. responded to the crash at the intersection of Third Avenue and East Lake Drive.

“The accident investigation revealed a silver 2016 Kia Forte was traveling south on Third Avenue at East Lake Drive when it attempted to pass two parked vehicles on the right side of the roadway,” Police Sgt. John Bender said. “While attempting to pass the vehicles, the Kia swerved to the right and struck the rear bumper of one of the parked cars causing the Kia to flip over onto its roof. The rear end of the Kia came to a rest against a vehicle traveling north on Third Avenue on the opposite side of the roadway. No injuries were reported.”

Bender said police cited the driver of the Kia for failing to maintain their lane.