Trader Trolls: No, there won’t be a Trader Joe’s store at the site of the Decatur water tower

Trader Trolls: No, there won’t be a Trader Joe’s store at the site of the Decatur water tower 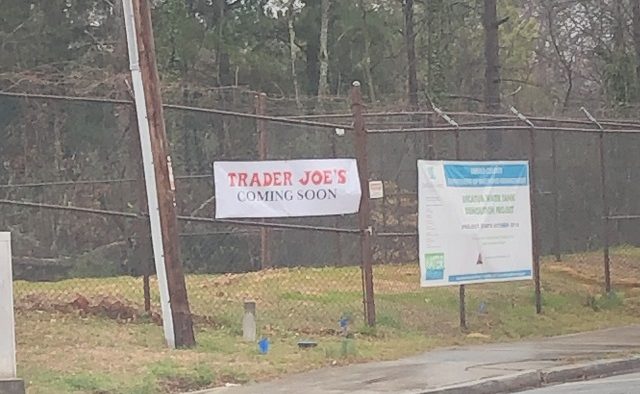 A "Trader Joe's Coming Soon" sign placed at the lot that used to hold the Decatur water tower is apparently a joke. County officials say there are no plans for the store on that site and note the site is too small. Image provided to Decaturish by a reader.
Share

Decatur, GA – The old water tower on West Howard Avenue is gone, and it has apparently become a blank canvas for some top-shelf trolling.

An unknown and mischievous person put a sign on the fence surrounding the old water tower site at 1129 West Howard Avenue, next to the East Lake MARTA station. The sign declares “Trader Joe’s: Coming Soon.”

Alas, it is not the case. There are no Decatur store announcements on the Trader Joe’s website and a media request to the company went unanswered. The county owns the property and the DeKalb County Department of Watershed Management threw cold water on the idea as well.

“According to the Department of Watershed Management, there are no plans for a Trader Joe’s at this site,” a spokesperson for the county said. “Besides, the site would be too small.”

And Decatur dreams big when it comes to Trader Joe’s. The mere mention of a Trader Joe’s coming to Decatur is enough to light up online chatter. It doesn’t matter that greater Decatur has an ALDI — a company that owns Trader Joe’s — and a Whole Foods 365 store. Special off-brand labeling and dirt-cheap discount wines are not enough to scratch that Trader Joe’s Itch. The yearning for a Trader Joe’s prompted Atlanta Magazine to recently muse, “Why can’t Decatur get a Trader Joe’s?”

“Trader Joe’s, however, is notoriously conservative when it comes to growth,” Atlanta Magazine writes. “It didn’t expand beyond California until 1993, and most of its stores are tiny compared to those of its big-box competitors. Although the company is rather tight-lipped about how it chooses locations, industry-watchers believe it is extremely picky when it comes to demographics, demanding a customer base that’s well-educated and boasts a six-figure median household income. It typically selects retail space only in established shopping centers on high-traffic thoroughfares in densely populated areas. It also likes lots of parking (which is to say, more than what’s available at its Midtown Promenade location.)”

Atlanta Magazine sees cause for optimism, noting that Decatur is rich and getting richer and money still talks.

Maybe the sign on the vacant lot isn’t trolling. Maybe the person who put the sign there is trying to keep the dream alive.