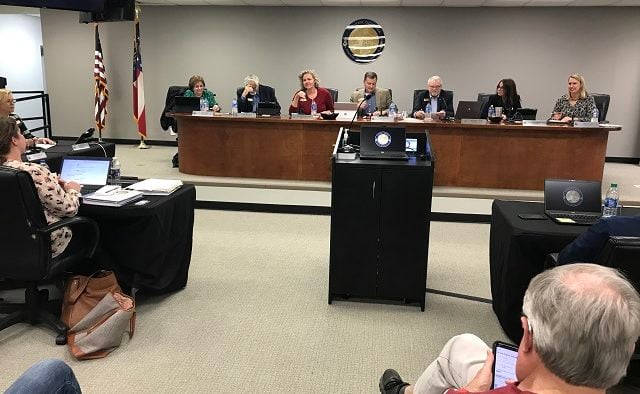 Tucker, GA – The Tucker City Council on March 9 unanimously passed an ordinance to allow a 99,000 sq. ft. commercial development at Hugh Howell Road and Mountain Industrial Boulevard. Developer Branch Properties promises the project – which includes active trails, an art installation, and green space — will be “state of the art.”

Conditions by city staff included outdoor furniture design, signage, and traffic improvements in the area. According to the conditions, businesses not permitted in the shopping center include vehicle rental, brokerage, sales, and upholstery; adult entertainment; nightclubs; bus or rail stations; adult day care; and animal shelters, among other businesses.

“I’ve been watching [the proposal], following it, quietly in the back,” Gross said. “I have to say, this is an out-of-the-ballpark model of a first-class developer working with a first-class community for a first-class development. I think the community should be very proud of themselves in both directions. As a commercial real estate broker with 35 years of experience, there is not a developer that I know of anywhere, but especially in DeKalb County, that is willing to develop [to the] quality of Branch.”

No one came forward to oppose the development during public comment.

After the ordinance passed, Mayor Frank Auman said, “We got as good a project as we possibly could have. We are looking forward to having you push dirt around over there.”

Councilmember Michelle Penkava said, “We are still trying, in the short term and not related to this, to get the phasing done at Lynburn and Lawrenceville Highway. We are waiting on GDOT at this point.”

Courtney Smith, Tucker’s Director of Planning and Zoning, presented the first read of an amendment to change the city’s zoning code.

“We proposed to remove the community council as a body and replace them with a public participation plan requirement … We are also planning to change the planning commission from a five-member body to a seven-member body,” Smith said.

Tucker’s Community Council is a group of nine volunteers “created to review applications for rezoning, land use plan amendments, special land use permits and text amendments, and to report their recommendations to the planning commission.”

“We are hoping a neighborhood meeting earlier in the process will allow these proposals to be more community-driven; to address the needs and issues of our residents and of our business owners,” Smith said.

Tucker city staff said running zoning applications through community council extends the process by months. By holding a neighborhood meeting, developers gain direct contact with neighbors within 500 to 1,000 feet of the affected area.

A second read of the amendment is scheduled for March 23.