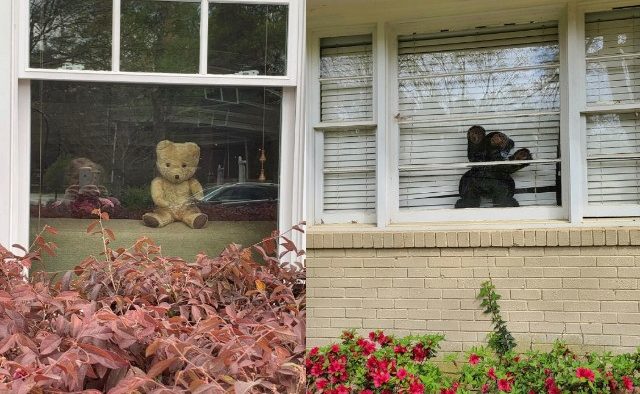 Decatur, GA – Hannah Manry, a nanny in Decatur to three children under the age of six, is from the small town of Colquitt in South Georgia.

Recently on social media, she noticed that a couple of parents from her hometown were raving about how much their kids love the game Bear Hunt. Then, after seeing WALB from Albany, Georgia, report on kids playing Bear Hunt in the midst of COVID-19 quarantine, she decided to see if any Decaturites would be interested in playing.

“I’m a nanny of three children, and they’re five, three and two, and I just thought that it sounded like a really good idea because they are honestly going stir crazy being inside all the time and, you know, not being able to interact with other children,” Manry said. “I posted it on Nextdoor and just went from there, and a lot of people responded.”

Bear Hunt is a game played throughout neighborhoods, where people participating in the game put a stuffed animal, like a bear, in a window in their house for children to spot when they’re walking or driving by. Manry said that the game originated from a children’s book called, “We’re Going on a Bear Hunt,” which is also a popular children’s song.

“Every time we go outside, we sing the song,” she said.

While her post got locals playing in the neighborhoods near downtown Decatur, where she nannies, Manry said that people from all different neighborhoods around Decatur, like Oakhurst, Kirkwood, and Midway Woods responded, wanting to participate.

Nassim Nichols, a mother to a two-and-a-half-year-old boy and resident of Midway Woods in Decatur, decided to post in their neighborhood Facebook group about playing Bear Hunt in their neck of the woods, so to speak.

And for the record, this game isn’t just trending in Georgia. Nichols said that the first place she saw it was in her sister’s neighborhood in Texas. After posting in the Midway Woods Facebook group, she said that people started to say where they were located in the neighborhood and that they put a stuffed animal out, ready to play.

“Well for us, I mean, my son loves the book, so I always talk about the book before we go on our walks. ‘We’re going on a bear hunt. Let’s go find bears,’” Nichols said. “I think in this day and age, we all need something to look forward to, and he loves spotting the bears.”

Aside from the entertainment and joy that children find in playing the game, Nichols and Manry both believe that Bear Hunt has given neighborhoods in Decatur a sense of community in light of the COVID-19 outbreak.

“It’s some type of togetherness, just seeing a bear in a window,” Nichols said. “Knowing that we’re all in it together, since we’re all kind of isolated from each other, it just feels nice to be thought of like, ‘Oh, look, they actually took the time and put something in their windows so my son can point it out.’ It’s just been kind of heartwarming that way.”