Congress allocated $2 trillion to help the economy recover from COVID-19. Is it enough?

Congress allocated $2 trillion to help the economy recover from COVID-19. Is it enough? 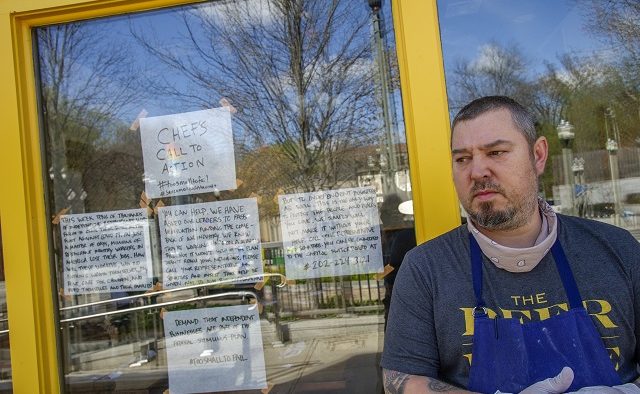 FILE PHOTO USED FOR ILLUSTRATION PURPOSES: Terry Koval, owner and chef at the Deer And The Dove and B-Side Wood Fired Bagels on Sycamore Street said he had to let his entire staff go. He is asking people to contact their senators and representatives to demand that independent businesses be part of federal stimulus plan. Photo by Dean Hesse
Share

DeKalb County, GA – In response to the COVID-19 pandemic, Congress approved a $2 trillion shot in the arm to boost the economy.

The Coronavirus Aid, Relief, and Economic Security Act provides $1,200 checks to individuals, improved unemployment benefits and more than $300 billion to help small businesses. For a more detailed breakdown of the bill, click here.

The Georgia Small Business Development Center has a detailed breakdown of those programs which you can read by clicking here.

The Georgia Department of Labor reports that the agency processed 133,820 unemployment claims during the week of March 22 through March 28, the highest number of claims ever processed in a single week.

“This represents an increase of 1102 percent over the prior week ending March 21 with 12,140 claims, more claims than were filed during the peak of the 2008-2009 recession,” the Department of Labor said. “Unemployment claims throughout the United States increased 101 percent … to 6.6 million.”

While the stimulus bill is one of the largest ever approved, experts interviewed by Decaturish had differing views on whether it will be enough to rescue the economy.

Thomas Smith, a professor at Emory University’s Goizueta Business School, said all of the elements of the bill are “fine as they are.” But some people might be waiting months for their checks, he said, delaying the impact they would have on the economy.

“The checks are great,” Smith said. “The fact they’re not going to roll out for some people for many months is troubling because they need help now.”

Smith said his wife applied for a small business loan.

“She’s working with Chase right now applying for the payroll protection plan…  You can use that to cover your workers,” Smith said. “If you’re using it for your workers, they’re going to forgive a lot of those loans. These things are good. It depends on how long it’s going to take. There are going to be tens of thousands of small businesses that are going to apply for these things.”

Aside from the time needed to process loan applications and send checks, there’s nothing in the bill that gives people a break on paying rent, he said.

“Congress is already looking at another stimulus package,” Smith said. “We’re about to have 20 to 30 percent unemployment. I’m sure you know a handful of people who were employed two weeks ago and are now unemployed. One in every five people in New York is unemployed.”

Smith said the problem is so “pervasive and deep” that the CARES act won’t be enough. It will require another relief bill and possibly another bill after that.

“It’s insane,” Smith said. “We’ve never seen anything like this. So coming up with a fiscal solution to something like this is not easy, because this has never occurred in our lifetime.”

The U.S. could potentially have a 50 percent unemployment rate, he said. At that point, it will be time to consider giving everyone a paycheck until the economy recovers.

“Go big, go bigger and think even bigger than that and go bigger,” Smith said. “You don’t want the ladder to be two inches short of the roof, right? To use an analogy, all of us clean our gutters in the fall. In order to be safe, the ladder has to go a foot over the edge of the gutters so you’re not falling. The ladder has to go over the roofline. If the ladder comes up one inch short, you’re in trouble. You’ve got to go over. People will say this is too much. Great, then it’s too much. It’s easy to scale back. It’s not easy to add another inch to the ladder.”

Emory University Goizueta Business School lecturer Ray Hill said everyone will feel some economic pain as a result of the pandemic.

“We’re going to experience some real pain, and there’s no way of avoiding that,” Hill said. “I guess the way I think about it is, people call this a stimulus bill, but it’s very different from the $700 or $800 billion we did during the [last] financial crisis. That was designed to increase aggregate demand.”

He said the goal of this bill is to decrease the amount of time it will take the economy to recover.

“It’s in a sense very well designed,” Hill said. “What you’re doing is saying to a lot of businesses we’re going to pay you to keep your employees employed. When we come out of this thing, it will reduce the time it takes for the economy to recover. From 2008 to 2009 we had 11 percent unemployment and it was years before we got back to 6 percent.”

But this is a different situation and Hill used a different analogy: if you took all the bats away from the Atlanta Braves, their batting average would be zero.

“A lot of industries stopped working. So they stopped and now you have unemployment, but if you tell them to go back to work, that should happen more quickly than any previous recession we’ve had,” Hill said.

Should there be another stimulus bill?

“I almost fear it,” Hill said. “I think we’re going to throw a lot of money at this and a bunch of it’s going to be wasted and that doesn’t bother me that much. I don’t think you can do anything quickly and not have some dollars wasted.”

Hill cautioned against Congress introducing an infrastructure investment as part of any future stimulus bill.

He noted that the economic rescue in 2008 and 2009 included money for “shovel-ready” projects.

“There isn’t any such thing as a shovel-ready project,” Hill said. “Most of that money was spent after the economy started recovering. Building new infrastructure is not going to help the recovery we need.”

Hill favors a wait and see approach to see if this rescue package does the job.

“I hope people just say, let’s see how this works,” Hill said. “Let’s see when the virus starts to crest. If it crests soon enough and people go back to work, this $2 trillion is all we’ll need.”

The coronavirus relief package was approved March 27, but Georgians are still waiting to receive the benefits of the law.

With the Coronavirus Aid, Relief, and Economic Security (CARES) Act, unemployment payment amounts will increase, more workers will qualify, and benefits will be available for a longer amount of time.

In the meantime, those who qualify for unemployment benefits will receive an amount from the state of Georgia.

Then, once the CARES Act is implemented in Georgia, GDOL has been told that they will be able to “backdate any payments for eligible weeks beginning March 29.”

Here’s what to know about Georgia’s unemployment benefits process — from filing to the amount of payment — and what to expect with the rollout of CARES.

Until the CARES Act comes into effect in Georgia, just those who have been receiving W-2s from their employer qualify for unemployment benefits.

But once the USDOL provides its guidance, those who are self-employed will be able to file for unemployment benefits.

You can file for unemployment benefits on the Georgia DOL’s website. If you are a gig worker, freelancer, contractor or someone who has received a Form 1099, be sure to check the website for updates on when you can make a claim and what documents you may need.

How Much Money Can You Receive?

With the CARES Act, an additional $600 from the Federal Pandemic Unemployment Compensation would be added on top of Georgia’s existing unemployment benefits package, which ranges from $55 to $365 weekly respectively, according to Kersha Cartwright, director of communications at the Georgia Department of Labor.

So, the most someone could receive weekly in Georgia is $965 with the federal and state packages combined.

Georgia DOL assesses if someone qualifies to receive unemployment benefits based on if they “earned enough wages during the base period,” according to the department’s website.

Then an equation is used to determine how much unemployment money people can receive per week.

How Long Can You Get Benefits?

The Georgia DOL has extended the time for filers to receive unemployment benefits from 14 weeks to 26 weeks, based on a March 26 GDOL news release.

Once CARES goes into effect in Georgia, the amount of time could increase 13 more weeks, according to Cartwright.

How Soon Will The Benefits Arrive?

If your employer filed the state unemployment claim for you, which is the preferred method, you should see at least the state portion of your unemployment benefit show up shortly. If you filed a claim yourself, it could take a little longer, according to officials.

Payments will arrive by a UI Way2Go Debit MasterCard that has been sent to you or by direct deposit.

This information was provided by WABE.