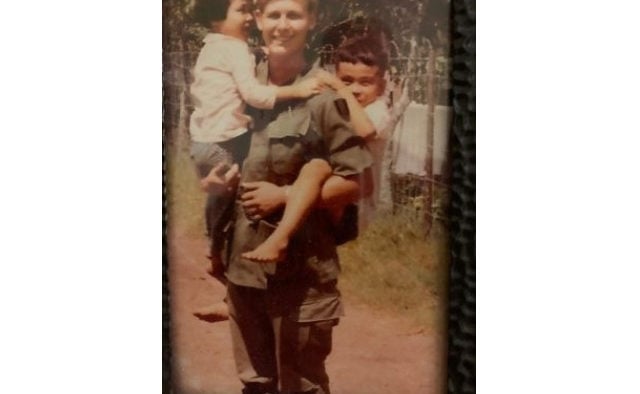 John Prine wrote several songs focusing on the American experience in Vietnam. In those songs, Prine conveyed the sense of betrayal to our country’s ideas and the far worse betrayal inflicted on the 58,200 American soldiers killed in the Vietnam War. Prine realized Americans, either in uniform or those safely observing thousands of miles away, came to understand the betrayals.

In a great country’s great military misadventure, bad things unraveled for many years; pain was felt many years after the last helicopter left Saigon. Prine exposes pain’s numerous paths in “Sam Stone.” Stone, a young soldier carries the American Ideal to Vietnam but returns stateside addicted to heroin. Sam’s children lament “there’s a hole in Daddy’s arm where the money goes.” Finally, Stone’s worn body can take no more and he checks out for good. His family is left without him and left with nothing. They have to sell their home in order to give him a proper burial. His coffin bears Old Glory. It’s a tribute and it’s a death sentence.

“Sam Stone” was included on Prine’s first album, John Prine, released in 1971. On the album Prine comments further on the Vietnam fiasco, this time satirically, with “Your Flag Decal Won’t Get You Into Heaven Anymore,” as the man “standing in the pearly gate” explains Heaven is “already overcrowded from your dirty little war.”

Prine followed up the next year with his second album, Diamonds In The Rough, which featured “The Great Compromise,” an allegory about the war and the country the soldiers were serving. He sings of a woman who taunts him with pleasures of the flesh, but she’s just messing him over. They go to a drive-in and he heads to the popcorn stand. Before he returns, she’s in a sports car with some entitled stud; she’s not dancing with the guy who brung her. Jilted, he still thinks of what it would be like for her to be his own and what all he could do for her. So, our thoughts go to a young man who wants to be a patriot, give all to his country, but still walk away feeling rewarded, or at least be able to simply walk away once the task was done. It’s a one-sided deal — a dirty deal — in such a “compromise.”

Seven years pass and Prine records four more albums. As expected, his songwriting remained top-drawer, while a bit surprisingly, the newer recordings possessed a rockier edge. That was especially true of 1979’s Pink Cadillac, recorded at Sam Phillips Recording Studios in Memphis, Tennessee, with Knox and Jerry Phillips, Sam’s boys, producing, and Sam dropping by with suggestions or taking control when necessary. On Pink Cadillac, the sound Prine and his mates created took precedence over the words, but Prine the songwriter still made his points, especially on “Saigon,” one of the album’s two songs produced by Sam Phillips. Father knows best.

A hard and loose bottom accompanies John Burns’ distorted electric guitar that opens “Saigon.” Sam Phillips blew out the tubes of Burns’ amplifier so he could make it sound like, according to Prine, “pieces of hot metal flying through the air.” Things flying through the air were easy to visualize in a song called “Saigon.” The things flying through the subject’s head, however, is Prine’s chief concern. Just a year before the term “Post-Traumatic Stress Disorder” came into play, the guy in “Saigon,” back from Vietnam, is slowly and not-so-surely getting his life together in the home of the brave. At the end of the second verse, Prine establishes the theme: “All the static in my attic is getting ready to blow.”

His exchanges with the opposite sex are awkward, offering instructions to a subject of his amorous attention, probably telling more than she wants to know.

You can hold me tighter.
It’s a sentimental present.
But turn loose of my gun.
All the way from Saigon.

The war vet says his “head is getting tighter” and he’s “starting to squeak.” He recalls seeing the mailman the week before carrying a letter from “stuttering Don” who says “things are getting better back in Sa, Sa, Sa, Sa, Sa, Saigon.” Not hardly. In ’79, even with the American nemesis out of the way, Vietnam was fighting two wars, one with Cambodia and the other with China. Over 200,000 Chinese troops stormed Vietnam’s northern border. Instead of things getting better in Saigon, they seemed to be falling apart — there — and everywhere else. The war vet remains on shaky ground; he’s delusional. As the song draws to a close, its brisk pace continues with the war vet repeating “things are getting better back in Saigon.”

But things weren’t getting better in Saigon and in 1979 Americans didn’t want to hear about it. That was history America wished to set aside, even forget, as if forgetting history would keep us from repeating it. Of all people, Joan Baez, who gave as much time to her antiwar activism as to her singing career, took centerstage with the newest tragedy in Vietnam. In late May ’79, Baez placed ads in The New York Times and other newspapers assailing the Communist government’s “brutal disregard of human rights.” Learning of reeducation camps and dissidents being tortured, Baez proceeded to have 83 people, including Lily Tomlin, Ed Asner, Cesar Chavez, Allen Ginsberg and Lawrence Ferlinghetti, join her as signatories on the full page ads. Once again proving no good deed goes unpunished, Baez took some flak from members of the American Left, including a public disagreement with Jane Fonda, her comrade when American armed forces were tearing up Vietnam’s countryside.

We’ve no idea of what political philosophies of Prine’s Vietnam vet possessed as he was adjusting, after a fashion, to life back home. He could have blamed the commies he had to fight or his own government for sending him over to fight. Whatever, he was scarred, just like Vietnam’s countryside and just like the American psyche.

The Vietnam War would have its legacies in America: Agent Orange, PTSD, broken families and wounds that wouldn’t, couldn’t heal. And despite the military build-up under the Reagan administration, there was still a wide-eyed but ofttimes legitimate hope we’d lay our weapons down — and not pick them up again, whether in battle overseas or at home against our fellow citizens. As four more decades passed, the nation’s leaders found reasons to go to war again, and again, and again, all expensive trips overseas. And the soldiers come home and find their fellow citizens gradually more war-like with each other. The results of the election on November 8, 2016 began making that clear to most anyone paying attention.

So it does one good to keep contact with an old friend who’s also been paying attention. Scott Hudson and I have been friends since the late ’60s when we attended the same church as teenagers. Four years older than me, Scott served in Vietnam for a year and returned to his Atlanta-area home in 1972. We spent a lot of time together, attending shows at the Great Southeast Music Hall as well as going to sporting events, films and local watering holes. Coming back to civilian life, he was thanked for his service but some of those thanking him would not have appreciated his growing opposition to our country’s role in Vietnam. Scott has always been proud to be an American but not like Lee Greenwood puts it. There’s much about America we may not be proud of but we can be proud enough to work on what ails the country.

Though he was glad to see America pull out of the ghastly war, he was concerned over what would become of the Christians in Vietnam. Several years before Joan Baez paid $85,000.00 for those newspaper ads, there was concern over what would transpire at reeducation camps. Scott levels his hopefulness with a good dash of cynicism. He knew good people would suffer in the aftermath.

Scott’s time in Vietnam was more about providing security at his base, breaking up fights at the bars; not so much Khe Sanh. He did get to know some of the locals in the country and perhaps he thought that he would see them again. In recent years he and his wife Kathy have taken advantage of opportunities to do some mission work in Southeast Asia. They really care for the people of Vietnam, people who could teach the world a lot about forgiveness. Other friends have also mentioned how the Vietnamese love Americans. Scott Hudson got to go back to a country he couldn’t wait to leave and come away feeling quite rewarded.

The protagonists in John Prine’s Vietnam songs didn’t meet such fortune. They ran headfirst into The Struggle, Part Two, the one they couldn’t recover from. Prine himself tossed off his mortal coil last week, a victim in what appears to be another war our leadership has stumbled into. And there’ll be no winners in this war, no matter what some “leader” continually blurts out between now and November. 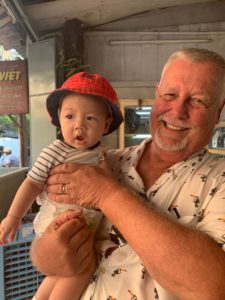 – Jeff Cochran is the current ad sales director for Decaturish.com. In the ’70s he wrote for The Great Speckled Bird, Creative Loafing and The Atlanta Gazette. From the mid ’70s until the early ’80s, he was the Regional Advertising Director for Peaches Records and Tapes. In 1981 he began a 27-year career in advertising at The Atlanta Journal-Constitution. Since then he has served as the Advertising Director at Decaturish. He is also a contributing editor to Like the Dew and Beatlefan magazine.