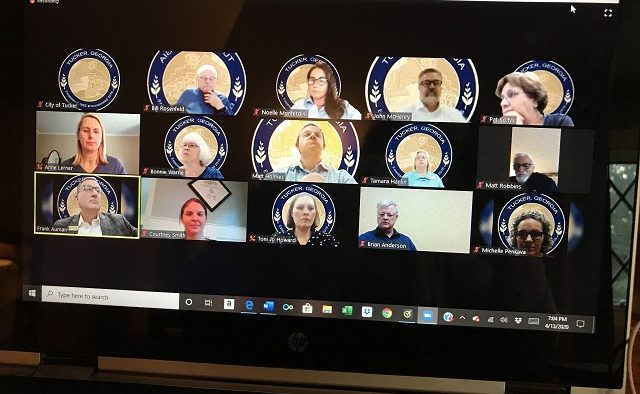 Mayor Auman said public comment would be allowed, but no residents were present for the second consecutive City Council meeting.

Despite difficulties with sound quality, the meeting addressed three main items: An ordinance to amend city of Tucker’s alcohol code; an agreement to acquire Smoke Rise Bath and Racquet Club; and budget approval of the new city hall construction.

Tucker’s new city hall, located at 1975 Lakeside Parkway, is scheduled to be complete by late June according to project manager Sam Peng.
The 22,000-sq. foot space will incorporate all administrative and staff offices, municipal court, and traffic court.

City Attorney Brian Anderson presented the first read of an ordinance to amend Tucker’s city code on alcohol. With this version, the city finance department has the power to revoke the license of establishments that have not responded by the deadline, and complied with an audit request within 30 days.

Additionally, Anderson explained limitations on the serving of distilled spirits, beer, and wine. Alcohol may be served Monday through Saturday from 9 a.m. to 1:55 a.m., and Sunday from 11 a.m. to 1:55 a.m.

The ordinance reads, “only establishments specifically licensed as a late-night establishment shall be authorized to sell and deliver to the customer for consumption on the premises after 12:30 a.m.”

An alcohol license will be suspended for 10 days if an establishment fails to pay taxes for two consecutive months or three times in a 12-month period. The ordinance adds, “The failure to timely pay the tax imposed by this section for three consecutive months or four times within a 12-month period shall render the dealer or person liable therefore subject to revocation of the alcoholic beverage license.”

A second read of the ordinance will be presented at a future meeting.

Robertson’s April 9 memo to Tucker staff and Mayor Auman states, “The Smoke Rise Bath and Racquet Club has had issues with sustaining consistent board members, volunteer workforce, and sufficient funding for required maintenance and repairs over the past several years. As a result, the members have offered this property to the city for no cost and City pays all existing debt incurred for minor improvements and repairs and past-due water/sewer, electric (totaling less than $20,000).”

However, a Smoke Rise resident and board member insists it is not a fledgling community. The board member said: “We have been active with community outreach and involvement, and we are on the upswing. We are not flush with cash, and there is always stuff needs to be done. But our goal was not a rescue mission. We presented [an acquisition] as an opportunity for the city to what they already wanted – to have a community that is well-served.”

In addition to the acquisition of the pool and tennis club, the memo suggests:

– Renovation of nearby, undeveloped Lord Park would provide improved park access to the Smoke Rise community.

– Improvements for the upcoming 2020 swim season include grounds cleanup, a new chlorinating system, new fencing, repairs to pool equipment and pavilions, and conversion of tennis courts to pickleball courts.

Mayor Auman led a discussion, but council members struggled to find clarity in fee structure. Councilmember Matt Robbins said, “I would like to put this on hold for Rip to talk to them one more time …”

Robbins made a motion to defer the item to City Council’s April 27 meeting. It was approved.

To conclude the meeting, council members reminded Tucker residents to participate in Census 2020.

Mayor Auman added: “All of this depends on us exercising our freedom to do the right thing. Doesn’t matter whether the city has an emergency order or the governor or the entirety of the united states, it still ends up being voluntary. We’ve each got to decide we are going to cooperate and do what’s called for.”