Daily Totals vs. Moving Averages: How health officials are tracking COVID-19 in Georgia

Daily Totals vs. Moving Averages: How health officials are tracking COVID-19 in Georgia 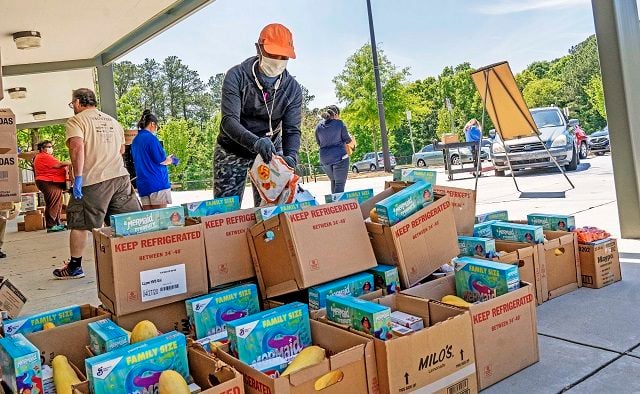 FILE PHOTO: Volunteers and staff at the Wade Walker YMCA in DeKalb County pass out free boxes of food on April 17, 2020. Photo by Dean Hesse.
Share

Atlanta, GA – In late April, the Georgia Department of Public Health changed the way it reported new confirmed cases of COVID-19 on its webpage dedicated to daily updates on the pandemic.

The changes sparked confusion among the public, with some readers accusing news outlets of reporting inflated totals, while others believed the department was trying to camouflage the extent of the virus’ spread for political reasons.

In reality, the changes reflect a more detailed way of looking at the epidemic statewide and understanding the spread over the virus over time, state health officials and epidemiologists say. But it is important for the public to understand the numbers they are seeing and what they mean.

To help readers understand the data posted on the daily state updates, we reached out to an expert with Emory University’s Rollins School of Public Health to explain.

In March, when Georgia first began to see cases of COVID-19, the state’s testing capability was very limited. Only some hospitalized patients – those with symptoms almost certain to reflect COVID-19 — were able to be tested. And, the test results were not available for several days afterward. During that time, the state department of health reported the daily number of new confirmed cases — the total number of positive tests each day — as well as the total number of cases since testing began. Whether the test result came back two days after the patient was tested or five days, the case was reported on the day it was confirmed with a positive test.

The change allows the state to track infection rates over time with more accuracy, says Allison Chamberlain, research assistant professor in epidemiology at the Rollins School of Public Health at Emory University. Chamberlain also serves as a consultant to the Fulton County Board of Health, assisting in data analysis.

“It’s all about time,” she explains. “There is time between when a person first gets infected to when a person potentially shows symptoms like fever or cough. Then, there is time between symptom onset and when that person decides the symptoms are bad enough to go to the doctor. If the doctor runs a COVID-19 test, it can take a day or two after that to get the results back. Then if positive, [for the test] to get reported and counted by the state. So any shift backward in that timeline is meaningful because it’s presenting data closer to when a person got infected – which is what we care most about.”

While it’s true that Georgia’s total number of cases may increase by 1,000 or more in one day, that number lumps together cases that may have presented weeks ago with those that are more recent.

Hospital and health department staff notify patients when positive results are received and must then enter the data into the state’s notifiable disease surveillance system, she adds.

“Because of all of these different elements, there may be cases that get slowed down somewhere in that chain,” she continues. “This results in some making it into the surveillance system later than others. It’s for these reasons that the total case count can appear to increase by more on a given day than the new case count would indicate that it should.”

People looking at just the rising total number of cases may be left with the impression that hundreds of people tested positive in just the last 24 hours, but that is not what that number truly represents.

At the same time, people noticing the much lower daily totals may believe that the numbers of infections are declining more rapidly than they are. The state has been careful to note that the numbers of cases reported for more recent dates do not reflect the number of tests that are still pending and those totals will likely increase.

“In my opinion, trends are more important to watch because there are so many reasons why daily case counts can be volatile,” Chamberlain says.

Why we are tracking a 7-day average

At the same time, the state shifted the way it reported the new cases, it also began publishing a line chart tracking the number of confirmed cases per day. That chart also contained a line showing something called the seven-day moving average. While the points with different case totals show drastic spikes up and down, the moving average looks like a smoother curve.

This is because there are so many things that influence the number of tests that are taken on a particular day that do not really have anything to do with the spread of the virus.

“For example, case reporting can go down over weekends which can give a false sense of decline before the numbers appear to jump on Monday and Tuesday as staff catch up on entering results that may have come in over the weekend,” Chamberlain says. “ The seven-day moving average is one way to smooth out these daily ups-and-downs to show a clearer picture of what’s really happening in case trends.”

What to know about the number of tests administered

The state is now publishing the number of tests that have been given across the state. As more and more people are able to be tested, this will give health officials a better understanding of how many people may have been infected with the virus. And, it will give them another way to see when transmission begins to decline.

“Reporting the number of tests administered is great because it allows us to see what proportion of all tests being conducted are coming back positive,” Chamberlain says. “And tracking this over time is a great way to look at the data because ideally, we want to see that proportion [of positive tests] coming down and staying down, especially as we make testing available to more and more people.”

As the state is able to move beyond testing people in hospitals and doctors offices, they will be able to see how widespread the virus really is, she adds. “Another way to look at it is: As we cast our testing net wider, we are getting closer to understanding how much infection is occurring among the general population, rather than just among those who most likely have the disease.”

As of May 7, the state reported 5,793 hospitalizations related to COVID-19, but it is important to understand that this number only includes the people who were hospitalized at the time the case was reported to the Department of Public Health and does not include patients who were reported as a confirmed case and were hospitalized later. The same is true of the reported ICU admissions.

“It is still useful to [collect the data] as long as people are aware of its limitations,” Chamberlain says.

But people who test positive are followed up with by public health investigators who will interview them to gather more information, like hospitalizations that may have happened after their diagnosis.  These are called case investigations.

“This is a good opportunity to educate the public about why conducting case investigations with Covid-19 cases is so important,” Chamberlain says. “Case investigations occur when a representative of a local health department reaches out to a case – usually by telephone – to get additional details about that person’s course of illness.”

The investigation includes the person’s history of illness, any hospital admission and answers to other questions that give health officials a clearer picture of what happened before, during and after that person’s COVID-19 test came back positive.

“If I could make one plea to the public it’s that if you do test positive for COVID-19, please answer calls from unknown numbers during this time,” Chamberlain says. “ It might be a friendly health department representative interested in gathering additional information.  That information will ultimately help us all understand the epidemiology of this disease so much better.”

Cases are not declining, yet

The recent numbers do not reliably indicate a decline in cases, Chamberlain says. State officials note on the website that cases within the most recent 14 days do not include test results that are still outstanding.

Dates earlier than the recent 14-day window marked on the state’s chart are more likely to be accurate totals. So looking for an average decline that continues over two weeks would show that we are really seeing fewer cases.

“It is important to note that — if you are looking at the graph with the cumulative line [the line chart below the one with the daily case reports and moving average] that we are never going to see that line slope downward,” Chamberlain adds. “The absolutely best thing to see with that graph is complete leveling off, which means no new cases are being added over time.”

Now that COVID-19 testing is available to more people, the more people who are tested the more information public officials will have to guide decisions.

“Who is getting tested dictates what we are able to see,” Chamberlain says. “As we test more and more people, we will have a more accurate picture of what’s really going on in communities around us.”

Warning: gethostbyaddr(): Address is not a valid IPv4 or IPv6 address in /home/decatwpwao/webapps/DECATwp/wp-content/plugins/sg-security/core/Activity_Log/Activity_Log_Unknown.php on line 316