Dear Decaturish – A stroll through Rehoboth Cemetery in Tucker

Dear Decaturish – A stroll through Rehoboth Cemetery in Tucker 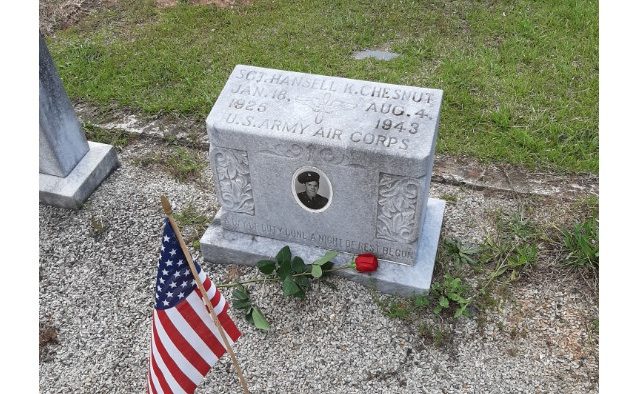 Sgt. Hansell J. Chesnut was only 18 years old when he died in an automobile accident while training in Dothan, Ala. Photo by Chris Billingsley
Share

Before moving to the Promised Land (Smoke Rise), I lived in the City of Decatur and for a number of years, I organized a Memorial weekend program called “Flags and Flowers” where volunteers decorated the graves of more than fifty Decatur boys who gave their lives in the service of our country. For numerous reasons (all poor excuses), I haven’t found the time to search the many Tucker cemeteries until yesterday when I stopped at the historic Rehoboth Cemetery on Lawrenceville Highway. Seeking the grave of someone I read about years ago, I rediscovered the real reason for this holiday weekend and that is, honoring those who gave all.

The grave I was looking for at Rehoboth was that of Hubert Lee Garner, who died fighting in North Korea in 1951 at “The Punchbowl.” His grave is well maintained but the American flag here was badly worn. I replaced it and added a rose thinking the same questions I always have. Where did he attend high school? Did he play sports? Does he have friends still alive today that never stopped grieving his death?

This is part of what Memorial Day is all about, remembrance.

Turning to leave, I noticed several old and tattered flags and decided to stop by. Sure enough, I began to find more and more heroes that deserved a flag and flower.

Louis C. Treadwell was killed fighting in North Africa in 1943. Frank S. Butler’s monument is a sad reminder of many of those who fought and died during WWII who were listed as “missing in action.” Sgt. Hansell J. Chesnut was only 18 years old when he died in an automobile accident while training in Dothan, Ala. James B. Griffin spent three years in the Marine Corps fighting in the Pacific Theater during WWII. The information on his monument looked like he deserved a flag and flower but it wasn’t until later that I learned he died in a hunting accident after being discharged from the Marines. Knowing what I know about brutal fighting in the Pacific, I decided a flag and flower was well deserved. I spent maybe thirty minutes here but it didn’t take long to find Memorial Day heroes. I’m sure there are many more.

Before leaving, I stopped by the cemetery next to Rehoboth to visit an old friend, Donald Ray Brooks, a Decatur High boy killed during the Vietnam War.  We never met but his name appears on a plaque at Decatur High School stating that he died serving in Vietnam. Brooks was killed while flying a helicopter in 1968. He is buried next to his parents, forever together.

In the Decatur Cemetery, there is a monument with these words, “Lord of Hosts, Be With Us Yet, Lest We Forget: In grateful memory of those from DeKalb County who died in the service of their country, and who rest in foreign soil, or in the bosom of the sea. They stand in the Unbroken Line Of Patriots who have dared to die so that freedom might live and grow and increase its blessings. Freedom lives, and through it they live- In a way that humbles the understanding of most men.”

On this 2020 Memorial Day Weekend, I continue to be humbled by the sacrifices of our Gold Star Heroes and their families. Those of us lucky enough to enjoy living in Smoke Rise and Tucker should never forget our Memorial Day Heroes.