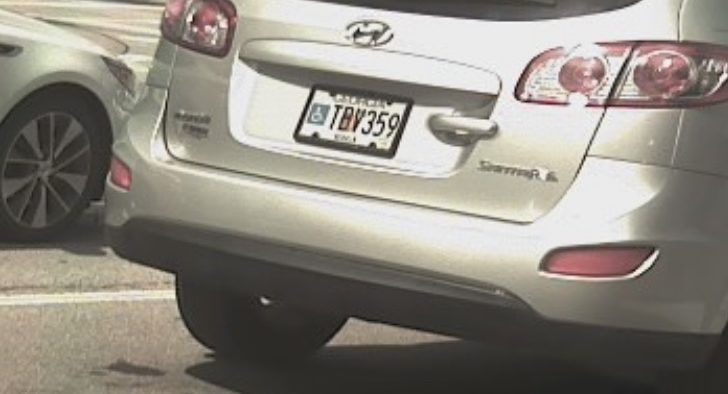 This is the tag of the vehicle believed to be involved in two hit-and-run incidents. Photo provided by DeKalb County Police.
Share

A spokesperson for the DeKalb County Police Department said none of the people detained were the suspect they are looking for. “Earlier today, Marietta Police Department recovered the vehicle used in yesterday’s hit and runs,” the spokesperson said. “There were a number of occupants inside the vehicle; however, our investigation determined that the person of interest was not an occupant of the vehicle. Meanwhile, the four-year-old injured remains in critical condition. If anyone has information about the three incidents, we urge them to call 9-1-1 or our Homicide Unit at 770-724-7850.”

DeKalb County, GA — DeKalb County Police are seeking a man accused of being involved in three hit-and-run incidents on Sunday, May 31.

The vehicle possibly involved in two of the incidents is described as a 2011 Hyundai Sante Fe with the following license plate number: TBV359

Police said on May 31 at 10:45 a.m., a man was struck and killed by a vehicle in Wade Walker Park. Police did not provide a detailed description of the suspect. Police said the victim’s vehicle, the silver 2011 Hyundai Sante Fe, was stolen and may have been used in the additional hit-and-run collisions.

Police said at 2:15 p.m. on May 31, a vehicle matching the description of the one stolen in the earlier incident crashed into a family of six riding their bicycles at North DeKalb Mall. The driver severely injured a four-year-old. Police said they learned that this vehicle also was involved in another hit-and-run crash in another jurisdiction at 12 p.m. on May 31, but the circumstances are under investigation.

The motive is unknown, police said.