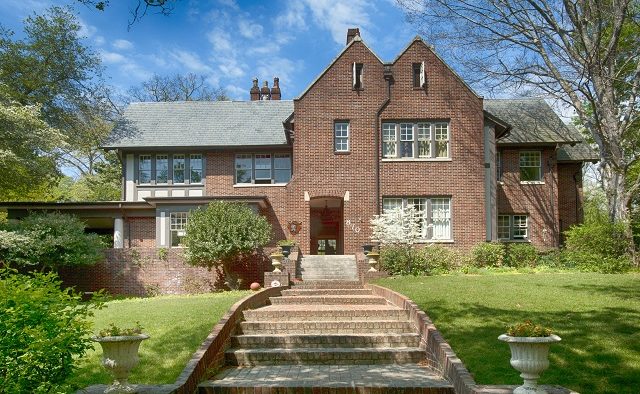 The home at 870 Lullwater Road was built in 1914 for railroad magnate William Greene Raoul and his family. Image provided to Decaturish
Share

Atlanta, GA – A storied Atlanta home is on the market in Druid Hills.

The home at 870 Lullwater Road was built in 1914 for railroad magnate William Greene Raoul and his family, according to a press release. It was one of the first homes to be built in what was then the new neighborhood of Druid Hills, designed by renowned landscape architect Frederick Law Olmsted. Raoul passed away before the home’s completion, but his wife, Mary Millen Wadley Raoul, and family, including daughter Eléonore Raoul, moved in.

Eléonore Raoul served as president of the Atlanta Chapter of the Georgia Woman Equal Suffrage League and Chair of the Fulton and DeKalb County branches of the Equal Suffrage Party of Georgia, according to the press release. However, Eléonore is perhaps best known locally as the first woman to be formally enrolled at Emory University.

It is said that Eléonore walked to the nearby university from her Lullwater home while the Chancellor was away from campus and enrolled in Emory University’s Lamar School of Law in 1917. She graduated in 1920, and two years later was named president of the Atlanta League of Women Voters. She married former Emory classmate Harry L. Greene, and the two lived with their three children in the family home at 870 Lullwater Road, the press release says.

“The opportunity to own this historic estate home designed by Walter T. Downing is an opportunity to own a part of Atlanta’s rich history,” said Kellum Smith of Engel & Völkers Buckhead Atlanta, who has the property listed. “I love that this home is where Eléonore Raoul lived and worked. I can envision her in front of the library fire, making plans and writing speeches late into the night to embolden the suffragettes. As a real estate professional who specializes in Druid Hills and Atlanta’s best Intown neighborhoods, I am always surprised by how many people do not know about the Druid Hills neighborhood and its gorgeous architecture and rich history. If you have been to Callanwolde Fine Arts Center, Fernbank Museum of Natural History or the Druid Hills Golf Club, then you have been to Druid Hills.”

According to the press release, the English-style Tudor home on two acres has only had a few owners over its 100+ years, and retains its architectural features. It’s situated on a hilltop on two acres with treetop views of the Lullwater Conservation Garden and Bird Sanctuary from the front terrace, library and master suite. The home also boasts seven fireplaces, limestone lintels in the solarium, mahogany pocket doors leading to a private suite of upstairs rooms, slate roof, copper gutters and more. Outside, the rear of the home includes a private courtyard, guest house, fire pit, sweeping lawn and English-style herb and flower garden. Landscape architect Ed Castro designed the grounds in keeping with the home’s history, the press release says.

“I believe Walter T. Downing and the Raoul family would be proud to see how well the original architecture has been preserved,” said Smith. “We are looking for a special buyer who appreciates the home’s history and features and will continue its tradition. Of course, we expect people will want to make improvements to the home to suit their needs, but that can certainly be done without compromising the original architectural integrity. Too many historic homes throughout Atlanta have been torn down or modernized beyond all recognition. Thankfully this is not the case with this beautiful and significant home. 870 Lullwater Road is a treasure waiting to be discovered.”