Octogenarian councilman becomes honorary Mayor of Tucker for a day

Octogenarian councilman becomes honorary Mayor of Tucker for a day 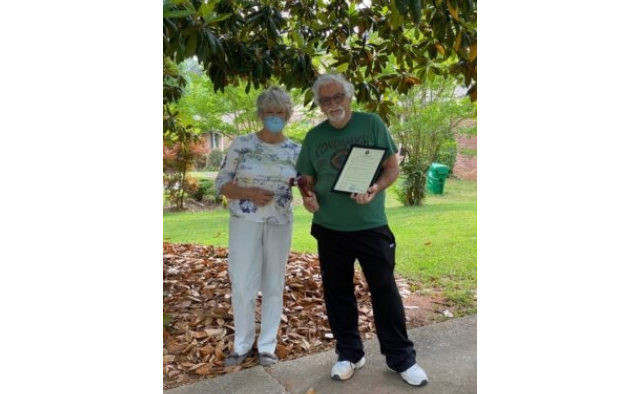 Matt Robbins and his wife Kathleen Robbins pose with a proclamation and the Mayor’s gavel outside their home. Credit: tuckerga.gov
Share

TUCKER, Ga. – Sunday, May 17th marked a milestone in Tucker as Councilman Matt Robbins became the City’s first-ever octogenarian elected official, according to a press release from the city.

In honor of his birthday, Robbins was named Honorary Mayor for a Day in a proclamation issued by Mayor Frank Auman, the press release said.

“He has dedicated his years in retirement to the betterment of his community, engaging with a number of volunteer groups and non-profits” before serving on the City Council for the past four years, Auman wrote in his proclamation.

Born on May 17, 1940, Robbins spent several decades working for the Environmental Protection Agency, the city said. He was first elected to represent Tucker’s District Two on the City Council in 2016. He was unopposed when he won re-election in 2018.

The city said Robbins was joined by his wife Kathleen and members of their family in receiving the surprise honor Sunday. Upon receiving the proclamation and the Mayor’s gavel, Robbins said, “It pays to be old.”