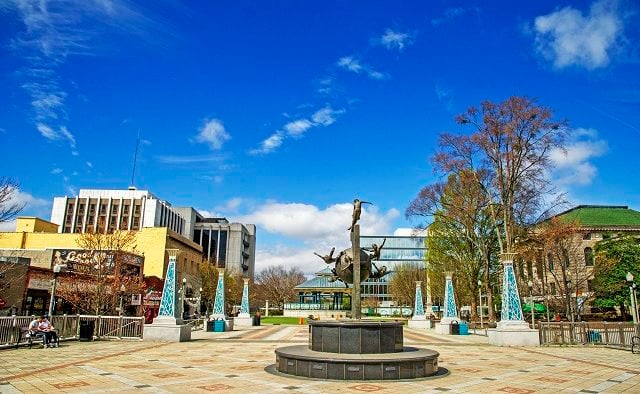 FILE PHOTO: The MARTA Plaza in Downtown Decatur is all but deserted on a beautiful spring afternoon. File photo by Dean Hesse
Share

Decatur, GA — Following explosive protests in Atlanta that occurred on May 29, the Beacon Hill Black Alliance for Human Rights has postponed a protest planned for Decatur.

The protest was planned for Sunday, May 31, in response to racist videos featuring Decatur High students using racial slurs. In the most recent video, a student was filmed holding what appears to be a toy gun while threatening to kill Blacks.

According to Atlanta INtown and WABE, clean up was underway on Saturday morning, May 30, following the previous night’s protest. Atlanta INtown reported, “Georgia National Guard and police are patrolling areas of Downtown Atlanta and Buckhead on Saturday after a night of looting, vandalism, arson, and violence rocked the city. Cleanup is underway in the hard-hit Centennial Park district, which was a flashpoint for the violence that devolved from a peaceful protest of the killing of George Floyd by  Minneapolis police officers.”

“As organizers, our first priority is to ensure that when we call people together, they are safe and are not unduly placed in harm’s way,” the Beacon Hill Black Alliance said in a Facebook post. “Unfortunately, with the current sense of rage that many people are feeling, combined with the presence of agent provocateurs, we are deeply concerned about our ability to maintain a peaceful gathering in the city of Decatur. Therefore, based on the unrest in Atlanta and across the country, the Executive Board of Beacon Hill has determined that it is in the best interest of our children and community to postpone Sunday’s gathering at noon.”

The anger over the videos, which was discussed in front of Decatur City Hall on May 29, remains and there’s still work to be done, the Beacon Hill Black Alliance says.

“We recognize that at the root of this unrest is the anger, frustration, and pain caused by white supremacy and institutional racism that remain pillars in American culture at every level,” the group said. “We urge white citizens in Decatur and across America to immediately and intentionally engage in anti-racist work with an objective of rejecting white privilege and dismantling the system of white supremacy that impact every aspect of our lives. While we are postponing tomorrow’s gathering, this work can not afford to be delayed. Without change continued unrest is inevitable and it will undoubtedly impact Decatur. We will be reaching out to our young people in the city of Decatur to hold a virtual ‘Talk Back’ to help them discuss and process what they are feeling.”