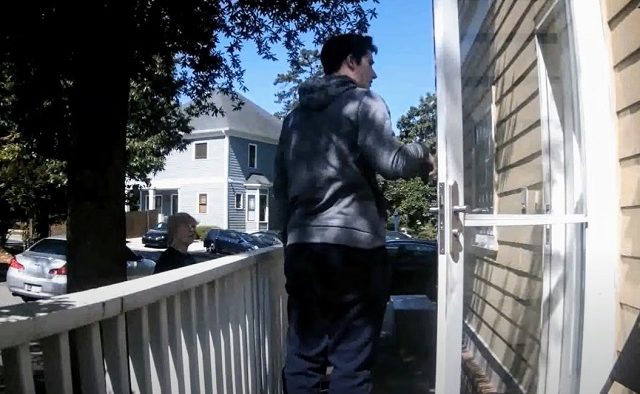 Elliot Baca, 18, bangs on the door of an Oakhurst resident's home. His friend, a blond-haired lacrosse player named Will Garstka, 17, looks on from the street. Screen shot obtained from security camera footage.
Share

Decatur, GA – Two white Decatur men who confronted a black Oakhurst resident on May 10 were arrested on charges related to that incident and quickly released.

An attorney for one of the men says both suspects turned themselves in.

Elliot Baca, 18, on Saturday, May 16 was arrested on a charge of simple assault and released a few hours later.  That same day, Will Garstka, 17, was arrested on a charge of being a party to Baca’s alleged crime. Both charges are misdemeanors. Garstka also was released a few hours later. Both men were released on their own recognizance. In Georgia, you are an adult for the purposes of criminal prosecution at the age of 17, according to Georgiacriminallawyer.com.

With local court proceedings limited or halted due to the COVID-19 pandemic, it’s unclear when the two will face a judge. The May 10 confrontation touched off a bitter debate about privilege in Oakhurst. Baca knocked on the door of a black man for about eight minutes while Garstka looked on. Baca demanded that the Oakhurst resident leave his home. Police eventually arrived, but they were not arrested that day and were instead given a warning for criminal trespass. Both men were upset because the Oakhurst resident allegedly claimed on social media that they were having “interactions with prostitutes,” according to the police report.

The charges were added a few days later after the Oakhurst resident posted their photos to the Oakhurst Facebook page and uploaded the video to YouTube.

Some in the community see the incident as a neighborhood confrontation that got out of hand, unmotivated by race. But other people, particularly people of color and their white allies, see it as a reminder that white lives are valued above others.

Decaturish recently published an article about the incident, which roiled Oakhurst for days. To see the full story, click here.