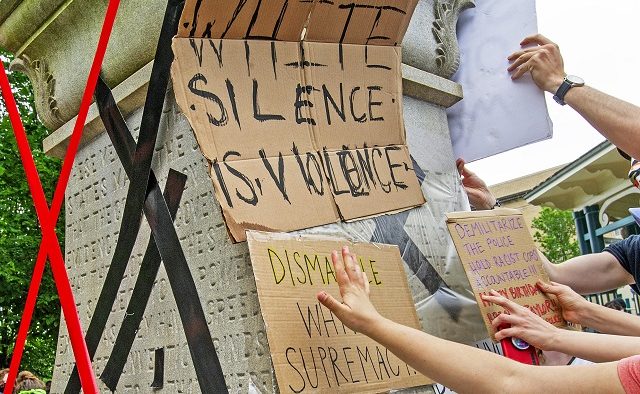 Protesters taped signs to the Confederate monument during a peaceful demonstration on the Decatur Square June 5. Photo by Dean Hesse.
Share

Decatur, GA – The Beacon Hill Black Alliance for Human Rights will be holding a rally on the Decatur Square on Wednesday, June 17 at 6:30 p.m. They will be joined by local community, business, and faith leaders.

The purpose of the rally is to demand the removal of all monuments to hate and white supremacy presently located around the area of the historic DeKalb County courthouse, according to a press release from the organization.

Encouraged by the court order by Judge Clarence Seeliger to order immediate removal of the Confederate monument, the Beacon Hill Black Alliance for Human Rights is holding this gathering to show support for the actions of the city of Decatur in filing the complaint and to urge DeKalb County to move ahead swiftly with the removal plans of a “nuisance” which is “manifestly injurious to the public health or safety.” The Beacon Hill Black Alliance for Human Rights has led the fight for monument removal since the first march led by Black youth in September 2017.

Local clergy will be represented at the rally following the pastoral letter of confession read to more than a dozen predominately white Decatur-area congregations this past Sunday. “Too many of our Decatur churches were planted in soil tainted with racism,” the letter states. “Too many of our Decatur churches harvested the fruit of that racism. And like too many of our predecessors, we who now serve as your shepherds have been too silent, too complicit in those systems because they benefit us.” The churches pledge to be allies in the struggle.

This rally follows the successful peaceful protest and march in Decatur attended by thousands on Sunday, June 7. The purpose of that rally was for community members to hear from Black students and youth, Black mothers of those killed by police violence, and other Black speakers who addressed the damage done by colonization and systemic white supremacy, including the racist threat to the Black community made in a recent video circulated at Decatur High School.

The monuments to white supremacy in the city square are directly connected to the recent incidents of racial injustice. “It is past time for city and county leaders to do what needs to be done, take bold and decisive action, and remove all these symbols of white supremacy,” said Beacon Hill Black Alliance for Human Rights board member Fonta High.