Community thanks student activists at ‘Salute to Students’ rally

Community thanks student activists at ‘Salute to Students’ rally 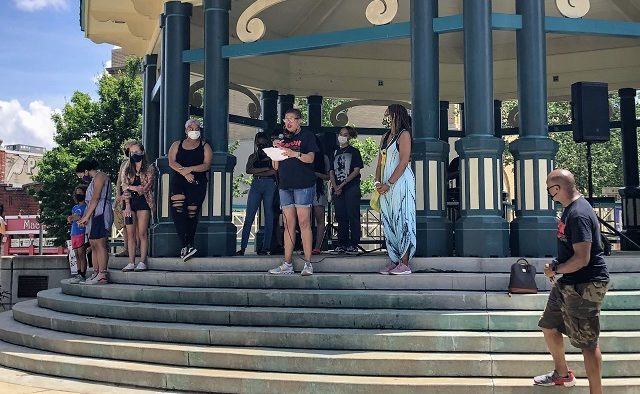 City Schools of Decatur Board of Education member Jana Johnson-Davis reads a statement during a "Salute to Students" rally on June 28. Photo by Alex Brown
Share

The event was held by Beacon Hill Black Alliance for Human Rights to celebrate the high school students who played a significant role in the monument’s removal, from meeting with legislators last summer to speaking at numerous “Take It Down” rallies over the last three years.

Beacon Hill Co-Chair Maluwi Davis invited young people to speak and reflect on the moment and where their work had led them.

“As I’m able to stand up here with some of the people who helped take down the Confederate monument, it’s really important that our generation being able to make that change was really empowering and I feel really honored that I was even able to do something this big. Because we really are the future and we are the ones who make the change,” she said.

“I know we’re here to congratulate the young people, but it’s all of our parents, our community leaders, and all of our teachers and everyone else who has helped raise us and help get us to this point, where we feel like we can lead and we feel like we can make change, that has made the most difference,” Axum said. “Ever since I was in first grade over at Claremont Elementary, we’ve come through this Square countless times, we’ve taken walking field trips through the Square … and they never [took] the chance to explain what this monument [was]. … All of you guys could have just been another teacher, another parent, another community leader who just let it go and just ignored it, and you didn’t. So I appreciate you guys putting it on us to make change and stand up for ourselves.”

Emma LaGon, the co-president of the DHS Black Student Union, said, “My little brother doesn’t have to grow up in a city that praises Confederacy.

“So I’m very thankful to everyone who marched, everyone who signed petitions, every teacher who inspired me to be an activist and to think how I think and lead the Black students at Decatur,” LaGon said.

“There used to be a symbol of hate in the middle of our square, and now there’s this empty space that in itself is a new symbol of the perseverance, of the strength, of the unity of — not only young people — but of our community, and I think it symbolizes this great step forward that we’ve taken not only in Decatur, not just in our state of Georgia, but in our country and in the world,” Watson said.

Adelaide Taylor, a BSU member, said, “I think that this [monument] coming down here can show other people elsewhere that they can do this stuff too, it’s not out of reach.”

A school-age child named Madeline moved the crowd to tears when she spoke.

City Commissioners Lesa Mayer and George Dusenbury, Board of Education Vice Chair Tasha White and School Board member Jana Johnson-Davis, and Mayor Patti Garrett were in attendance to celebrate the students.

White and Johnson-Davis read an official statement from the City Schools of Decatur Board of Education.

It says, “Now when a child walks through the Decatur Square for the first time, they will no longer have to ask, ‘What is that?’ or ‘Who does that monument honor?’ Today we recognize and celebrate the efforts of the students in the City Schools of Decatur who dedicated time and energy to removing a symbol of hate from our city square. … Your refusal to turn a blind eye to the pain that the monument evokes in the descendants of enslaved Africans is inspiring. To continue to do so while others make pleas to history or call for legal protection begs emulation.”