George on Georgia – The Not Black Panthers

George on Georgia – The Not Black Panthers 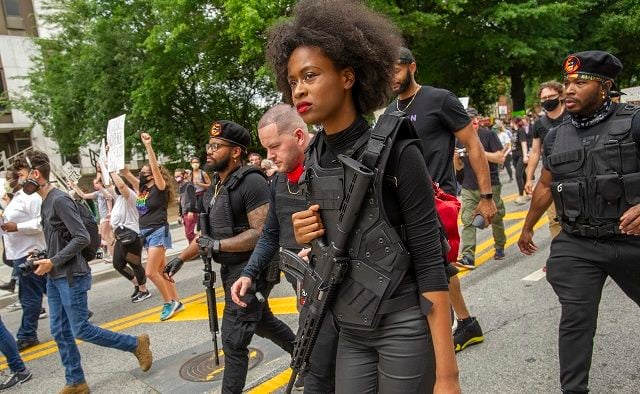 “No this wasn’t a paid performance. Who pays for this? What would be the price to sell my soul?”

I’ve been going back and forth for a few days with James Tillman, one of the nascent rifle-carrying revolutionaries who commandeered the Atlanta protest spotlight a week or so ago. Tillman and his team call themselves the Black Revolutionaries – now – and have been viral ever since pictures of them looking like the reincarnation of Angela Davis and Eldridge Cleaver.

As in IMDB profile, screen test on YouTube, music video extras actors. I initially approached this story in angry skepticism, suspicious of finding myself in the middle of a Sascha Baron Cohen-level put on. After lengthy conversation, I don’t think this is “Borat.” I think it’s more like “Tropic Thunder.”

My word, were they pretty. That was my first thought as I saw the first pictures of Whitney Oni, hand raised on the stairs of Atlanta City Hall, svelte, decked out in black web gear, shot from power angles that made them look larger than life.

The guns were real, though. Oni had a Smith & Wesson 22LR. They had ammo. They were ready to go if they had to, Tillman said.

“We’re armed. We are fully capable of using them. It’s not for show,” he said. “How does one get paid by the police to carry rifles and handguns. What’s the price to put my life on the line every time I step out there armed? People in my community are killed for much less.”

I think Tillman is sincere. I also think this group doesn’t really know what they’re doing yet. Which is to say, they’re just like most people these days, only better looking and armed.

We’re all kind of in uncharted waters right now, with unassuming white women getting tear-gassed and everyone’s one black friend fielding woke Instagram direct messages 16 hours a day. I’ve been telling people to roll with the weird for weeks.

So why not grab a gun and stand on the steps of City Hall like Bobby Seale? White people seem to do this all the time and no one bats an eye.

“Acting is a day job, that has nothing to do with how we feel what’s going on in our community,” Tillman told me in an Instagram conversation. “No hope or symbol was there for our people. Cops were going crazy with tear gas prior to us showing up, correct? Once we stepped up have you seen that happening in ATL? No. People are focusing on the wrong thing, our message is simple. We’re spreading knowledge to our community showing you can be armed. You can, with the right paperwork, have a handgun as well.”

Tillman said he is a Navy veteran – an aviation ordinanceman who served on the Carl Vinson – who came to Atlanta to break into the movie business. His partners in the Black Revolutionaries are all aspiring actors and models as well. The group of about 15 is not accepting new members and has deliberately avoided creating a social media presence. Their circle of trust, for the moment, is small.

Protests around Atlanta have – property damage aside – been rowdy, but with little real violence. I watched protesters surround a young man who threw a water bottle at cops a week ago. They berated him, and then one guy decked him. Demonstrators here by and large do not want to provoke police into a fusillade of tear gas, rubber bullets and arbitrary arrests. Tillman took up arms after being tear-gassed on the first night of protests.

He said he believes the presence of armed protesters may change the use-of-force calculations of police.

“Rules of engagement for the police force are actually different now that we’re armed. They can’t openly fire into a crowd with people with AR’s or rifles because that would lead into a firefight. It’s a strategic thing that we do for our people, to be armed,” Tillman said. “If we were the aggressors and we start shooting off, by all means, they would have the right to shoot.”

The problem, of course, is that police may instead skip the tear gas and rubber bullets entirely and go straight to live ammo to shoot at people with guns. “We are risking our lives every time we stand out, and a bunch of people say, ‘They’re actors and this is all a game.’”

“It is extremely dangerous to do what we’re doing … but we needed to make a stand, we needed to give hope to people because I needed hope in that moment when I got tear-gassed.”

Their rollout has not been without a faux pas or two. They’re actors not activists. Tillman’s revolutionaries are new at being weird, which means they are making all kinds of mistakes that are pissing off OG activists. The existing Black Panther groups have been weird for a long time.

“They seemed to be very sincere,” said Princess Morris, deputy general of the Revolutionary Black Panther Party. “Yet with them being actors I wouldn’t know if it was an act or was it more for a show. I don’t understand what they thought they were doing as far as pretending to be someone they’re not. You don’t just get to roll over and wake up and say I want to be a Black Panther and then to claim two separate chapters on different occasions.”

Black Marxists use the word COINTELPRO to describe other Marxists the way Olive Garden uses parmesan cheese – everywhere, on everything. Somehow, they’re both clubby and insufferably catty at the same time. Everyone in one group knows who is in the other groups and hates them, and anyone they don’t know is presumed to be an FBI agent until proven otherwise. And none of them knew these folks.

I am aware of the proclivities of the Black left from my time in the Occupy Wall Street movement; I maintain some cherished social connections across the political spectrum from that. But really: if you’re not close friends with someone who likes to wave a Little Red Book at you now and then, you’d have no idea how crazy people can get about this stuff.

Tillman acknowledges the early missteps. The group has been communicating with the media – haltingly – by email through a spokesman, Alann Pugh. They do not do interviews and have no social media.

“The organization apologizes to those who have significant ties to the original Black Panther Party and/ or historical experience with them directly or indirectly,” Pugh wrote. “It was not our intention to be a continuation of their legacy, but to create our own.”

Pugh described the Black Revolutionaries’ mission to arm and educate the Black community on gun laws, to “police and protect our own communities and to help rebuild Black Wall Street which was taken from us. We are not inciting violence or doing anything illegal, but we will defend ourselves and our communities by any means necessary.”

Black Panthers of varied flavors found the Instagram profiles of the young revolutionaries and sent them to me, after obsessively trawling social media for connections. The use of the Panther imagery without permission annoyed them. The presence of a white member — Michael Pierino Miller – enraged them.

“They’re anti-white,” Tillman said of the New Black Panthers. “They hate Jewish people. I was in talks with a few of their members who reached out. Once I said ‘pro-black doesn’t mean anti-white,’ it just triggered them.”

Hashim Akhenaten Nzinga was head of the New Black Panther Party in Atlanta seven years ago when he put a $10,000 bounty on the head of George Zimmerman, live in a CNN interview. Two days later he got arrested on a weak weapons charge for pawning a gun at my local pawn shop in Pine Lake. Fun fact: Nzinga was part of U.S. Rep. Cynthia McKinney’s campaign security entourage, and was among the folks hurling anti-Semitic slurs at news reporters during her concession press conference in 2006.

Nzinga denounced the armed protesters using Black Panther imagery in language I won’t repeat here – and most of you know how I love dirty words. Their harshest blowback hasn’t been from white supremacists but from Black activists.

Tillman is no Maoist, and while he describes himself as a revolutionary, he votes Democrat. “I can’t preach about change if I don’t partake in voting,” he said. “I was and am in full support of Bernie Sanders but seeing as he pulled out I shifted towards Biden. So maybe as he is, I’m a democratic socialist. Which means creating an economy that works for all not just the wealthy. Not Marxism or abolishing capitalism.”

It’s worth distinguishing this from the armed groups who invaded state capitols a few months ago, and who have been engaged in paramilitary training for the Boogaloo – a mythic race war to sweep away government as we know it. Tillman said he was hoping hate crimes legislation would pass in Georgia.

Frankly, Tillman’s politics aren’t all that far from my own. He wants equal treatment before the law regardless of race and will fight people who try to prevent that. Only, he’s better looking and armed.

Twenty years ago, I was a college senior fresh out of the Army, working at the campus radio station with Audie Cornish. Bobby Seale came to campus and blew off the white news reporters to hang out with us for a few hours. The thing I remember most clearly is how utterly mundane his interests were. Job training. Access to small business capital. 401(k)s. We had to coax stories about him shooting Nazis on 12th Street in Oakland or getting gagged in court during the trial of the Chicago Seven.

I didn’t think of myself as particularly radical before then. And I don’t now.

But a few years ago, I had seriously contemplated asking a group of white friends to take a casual walk down Peachtree Street while toting AK-47s, then doing the same with the brothers to see just how long it would take for a SWAT team to descend.

It wasn’t idle thought. I had started to work out the details with Georgia’s gun rights groups. But that was 2014, just before the Michael Brown shooting in Ferguson turned the world upside down.

The image of overweight quasi-militia Y’all Qaeda nitwits sporting bad tactical gear offended my sensibilities as a former soldier. So did my own physical condition. It’s hard to make fun of overweight white guys with guns as an overweight Black guy with a gun.

I’ve reached out in all the ways one can to try to talk to Oni, Miller and the others. Miller pointedly asked me to withhold his name. I’ve refused that request out of principle. Anonymity is toxic to responsibility. If you are acting as though the government should not have a monopoly on violence, then the public should know who you are.

I name cops, too.