After the Stand With Charlottesville candlelight vigil on August 13. 2017, in Decatur, Ga., attendees gather to discuss the controversial "Lost Cause" monument in Decatur Square.
Share

Decatur, GA — Superior Court Judge Clarence Seeliger has ordered the removal of the Confederate monument in the Decatur Square in response to a complaint filed by Decatur City Attorney Bryan Downs.

Downs filed the complaint on June 10 asking for the removal of the monument.

“Based on the Verified Complaint and the evidence and legal argument presented at the hearing, the Court finds that the Confederate obelisk located on real property owned by DeKalb County on the Decatur Square has become a public nuisance, as that term is defined in Title 41 of the Official Code of Georgia, and must be abated immediately,” Seeliger wrote.

Decatur City Manager Andrea Arnold said the county has until midnight on June 26 to comply with the judge’s order.

The ruling may touch off a legal battle over the monument’s removal, but removing the monument has been something residents have wanted for years. Decaturish published an editorial advocating for its removal on June 3. In 2019, the county added a marker contextualizing the monument, but recent protests against racism and police brutality have seen activists adding their own contextualizing markers to the monument. 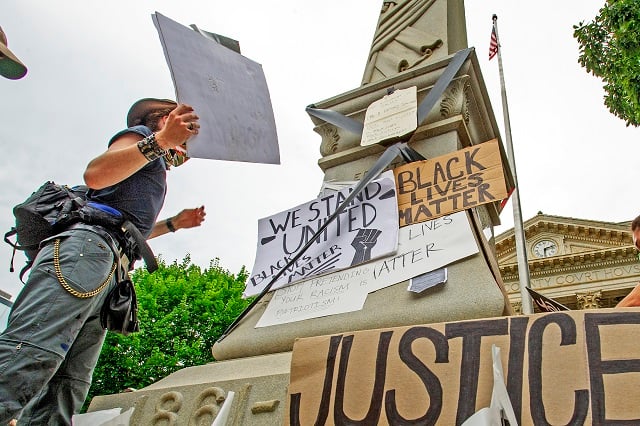 Protestors taped signs to the Confederate monument during a peaceful demonstration on the Decatur Square June 5. Photo by Dean Hesse.

In a press release about the ruling, Decatur Mayor Patti Garrett said, “We appreciate DeKalb County’s efforts in recent years to attempt to relocate the monument and we share the county’s frustration that no one was willing to accept the monument. We are at a point now where we cannot delay. This symbol of hate and oppression has created a real and present danger to our community and it must be moved for the protection of the public.”

“This monument is a lightning rod for all of the emotions that have surfaced after the racially-motivated events at the national level and the racist incidents right here in our community,” he said in the press release. “We have a lot of work to do as a community, but we must take this step to protect the safety of the Decatur community.”

Decaturish has asked DeKalb County officials for comment. On June 4, before Downs filed his complaint, an attorney for the Georgia Division of the Sons of Confederate Veterans emailed the county warning that the county would be sued if they removed the monument, which is against state law.

“As you may well know, the Monument was erected in 1908 to commemorate the Confederate dead in the Southern War for Independence (1861-1865),” attorney Martin K. O’Toole wrote on behalf of the Georgia Division of the Sons of Confederate Veterans. “The marker, according to data assembled by the DeKalb County Attorney recently, was paid for by citizen donations – including money raised by white and black schoolchildren.”

He said the Sons of Confederate Veterans asked him to “inquire by what authority the [County] Commission thinks it may remove the monument.”

“I would certainly hope that this matter can be resolved without the necessity or expense of litigation,” he wrote.

Before the judge issued a ruling on the monument, Decaturish received a copy of an email Commissioner George Dusenbury sent to a constituent on June 10 that said the city was exploring its legal options regarding the monument.

“Please know that the City Commission recognizes the urgency of the moment and are pursuing multiple avenues to get the monument removed,” he said. “We believe that we have yet to exhaust all of our legal remedies and are developing and pursuing strategies in this regard. I cannot promise you that we will solve the problem of the Confederate monument tomorrow, but we are committed to solving the matter sooner rather than later.”

In his complaint asking for the monument’s removal, City Attorney Downs said the monument has become “a flashpoint, a danger to the community, and a burden on the city of Decatur.”

Downs specifically cited the repeated vandalism of the monument as a reason to expedite its removal.

“For the past three years, the monument has been a frequent target of graffiti and vandalism,” Downs’ complaint says. “The monument has been spray-painted, marked on, taped over, and, on at least one occasion, smeared with human feces. Every time such incidents of graffiti and vandalism occur, city resources are expended. This includes investigating potential criminal damage to property, coordinating clean-up efforts with the monument’s owner (DeKalb  County), and  responding to media inquiries.”

In Downs’ complaint, he notes that recent incidents of racist violence against Black people have made the matter more urgent.

“With the tragic killing of George Floyd by Minneapolis police on May 25, 2020, following on the heels of video being released of an unarmed Ahmad Arbery being killed by vigilantes in Brunswick, Georgia, the nation appears to have reached a tipping point, with unprecedented, historic levels of sustained protest arising across the country, in Atlanta, and in the city of Decatur,” Downs wrote. “As the county seat and a center of commerce and government in a metropolitan region, the city of Decatur is a natural location for protests, demonstrations and rallies. The city of Decatur welcomes these gatherings where freedoms of speech, assembly and redress are exercised.”

Downs wrote that the monument is one of the “motivating factors” behind protests in the city.

“In the past few days, expressions of protest are being placed physically on and around the Confederate Monument in the form of notes, posters and banners,” Downs wrote. “The monument has had graffiti written on it with paint and permanent markers, including some that is  vulgar.”

Downs also cites concerns that demonstrators might do more than put signs and scribble graffiti on the monument.

“Despite the fact that protests and demonstrations in Decatur to date have been peaceful, there is a growing and highly reasonable concern that individuals might take matters into their own hands and attempt to tear down the Confederate monument,” Downs wrote.

To see the full copy of the complaint click here.

City Manager Arnold said public safety was the city’s overriding concern for the city in making its request.

Arnold said Downs was able to file the nuisance complaint in his capacity as the city attorney without official action by the City Commission. Arnold said the commission was aware of what Downs was doing and was supportive.

“The city commission was aware of his intent and he and I worked very closely together on this strategy,” Arnold said. “He did not do it without the knowledge of the appropriate parties. The commission was in support of it.”

Here is the full text of Seeliger’s order:

On June 10, 2020, Plaintiff Bryan A. Downs, in his official capacity as City Attorney of the City of Decatur, Georgia, filed a verified Complaint to Abate a Public Nuisance (“Verified Complaint”), as well as an Emergency Motion for Interlocutory Abatement of Nuisance (“Motion”). Defendant DeKalb County has accepted service of the Complaint and consented to an emergency hearing on the Motion via Zoom, which hearing was conducted on June 12, 2020. Plaintiff and Defendant appeared at said hearing and the Court received evidence and heard argument of counsel.

Based on the Verified Complaint and the evidence and legal argument presented at the hearing, the Court finds that the Confederate obelisk located on real property owned by DeKalb County on the Decatur Square has become a public nuisance, as that term is defined in Title 41 of the Official Code of Georgia, and must be abated immediately. In short, the Confederate obelisk has become an increasingly frequent target of graffiti and vandalism, a figurative lightning rod for friction among citizens, and a potential catastrophe that could happen at any time if individuals attempt to forcibly remove or destroy it.

WHEREFORE, in order to abate what has become a public nuisance, to protect life and safety, and to protect the Obelisk, I hereby ORDER DeKalb County to immediately’ relocate the Obelisk to a secure location for storage until further Order of the Court. Though the Obelisk will be stored out of public view, abatement, as required by this Order, is not for the purpose of preventing public display of the Obelisk, but instead is an appropriate measure to abate a public nuisance and protect the Obelisk.  Be it further ORDERED that the Sheriff of DeKalb County and the DeKalb County Police Department are directed to provide support to the Decatur Police Department as needed in order to preserve public safety on the Decatur Square until the Obelisk is removed.

The city sent out this press release on Friday afternoon, June 12, after Seeliger ordered the monument’s removal:

On June 10, 2020, the City Attorney for the City of Decatur filed a legal action in DeKalb County Superior Court to request that the Court order DeKalb County to relocate the Confederate Monument from the Decatur Square because it has become a public nuisance as defined by State law.  The Monument is owned by DeKalb County, not the City.

City Attorney Bryan Downs noted in the complaint that in recent days the monument has been an increasingly frequent target of graffiti and vandalism; and it is inspiring outrage, leading to demonstrations and protests, which potentially expose the public and police officers to COVID-19 and which could result in violence, injury or death to individuals, including those who may attempt to forcibly remove the monument.

Mayor Patti Garrett stated, “We appreciate DeKalb County’s efforts in recent years to attempt to relocate the monument and we share the County’s frustration that no one was willing to accept the monument. We are at a point now where we cannot delay.  This symbol of hate and oppression has created a real and present danger to our community and it must be moved for the protection of the public.” Mayor pro tem Tony Powers added, “This monument is a lightning rod for all of the emotions that have surfaced after the racially-motivated events at the national level and the racist incidents right here in our community. We have a lot of work to do as a community, but we must take this step to protect the safety of the Decatur community.”

On June 12, 2020, an emergency hearing was held with Superior Court Judge Clarence Seeliger. Judge Seeliger granted the Emergency Motion to Abate Public Nuisance and ordered that the County immediately relocate the monument to a secure location. A copy of the Order is attached. Judge Seeliger noted that these actions are needed as “an appropriate measure to abate a public nuisance and protect the monument.”