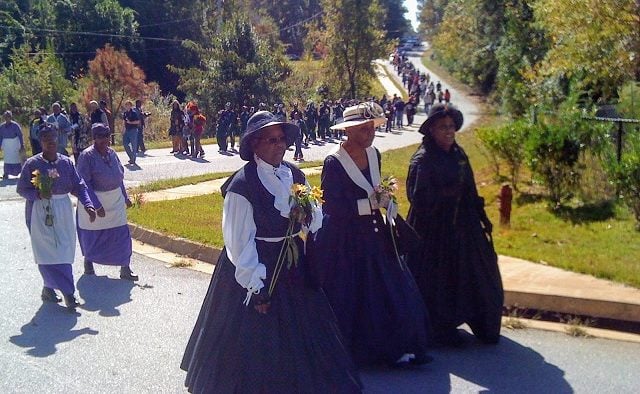 A re-enactment of a ceremonial procession by Flat Rock community members to the Flat Rock Cemetery. Photo provided to Decaturish
Share

Avondale Estates, GA —  On June 19, 1865, the last enslaved African Americans received word that they were free, two years after the Emancipation Proclamation was signed into law.

That day has since come to be known as Juneteenth, a celebration that has taken on renewed significance this year.

To commemorate Juneteenth  — also known as Freedom Day and Jubilee Day —  many Black families throughout DeKalb County will fire up the grill, join marches and protests, or attend events this weekend.

As the Black Lives Matter Movement gains wider acceptance, it has given hope to many Black communities across the nation. Younger generations of Black people now see the holiday in a new light.

“I know a lot of my friends are basically canceling the Fourth of July and instead, they are celebrating Juneteenth,” said NiSheena Smith, an organizer of Avondale Estates’ Defend Black Lives event that will commemorate Juneteenth on Friday. “They are saying this is our Freedom Day.”

Smith, who was recently appointed to the Avondale Estates’ Alliance for Racial Justice group, said to commemorate Juneteenth on Friday a “small, yet powerful protest” will be held in Avondale Estates to “tell Black people that we are listening to them, and we’re doing everything we can to fight systemic racism.”

The protest, which will begin at 3 p.m., will be held at The ArtLot, located at 70 North Avondale Road, Avondale Estates, GA. The event is intended to raise awareness about the essential need for communities in Georgia to reform policing, end racist policies within local, state and federal government and invest in Black communities. The event will include speakers, activities for children in attendance and stories to educate adults and children alike on the importance of Juneteenth and why it is celebrated within Black communities. There will also be a voter registration drive.

“We want to hold this event to show that Black people weren’t just slaves,” Smith said. “That’s not where our history begins or ends.”

Stella Jones, Chair of the Economic Development Committee of The NAACP DeKalb County Branch 5192, said it’s important for everyone to understand the significance of Juneteenth and why it’s a monumental day for Black communities.

“A lot of people are not celebrating Fourth of July because it wasn’t for us,” she said. “We are focused on the Black Out event from July 1 to July 7. For the whole week we are encouraging people not to spend money, and if they do, spend money with Black businesses only.”

To commemorate Juneteenth, on Saturday, The NAACP DeKalb County Branch plans to hold a virtual Juneteenth Celebration. The event will include a fashion show, storytime for children and an educational program.

The Flat Rock Archives and the Arabia Mountain Heritage Area Alliance in Stonecrest have joined forces to also host a virtual Juneteenth event. The organizations are offering a tour of the Historic Flat Rock Cemetery located in Flat Rock—one of the oldest African American communities in Georgia. The tour will offer heartfelt stories of triumph from the small community that began after T. A. Bryant Sr., bought 45 acres of land from a white landowner for $600. He later sold parcels to other African Americans. Out of this, a resilient Black community was born and thrived.

Tours of this nature are usually given in person. However, in-person tours have been canceled until the threat of the COVID-19 outbreak declines.

Revonda Cosby, the Executive Director of the Arabia Mountain Heritage Area Alliance, which manages the national heritage area that includes the Flat Rock community, said the virtual event is providing an even bigger opportunity than imagined.

“This means the world can now be a part of this tour,” she said. “The importance of spending time in a slave cemetery gives you a great point of reference. It tells us so many stories about slavery and segregation and we realize that in death for them — there was freedom.”

Slave cemeteries became sacred to Black people. It was one of the few places they could call their own and was rarely disturbed by outsiders during mass burnings and riots. They developed rituals to honor their loved ones and created special markings on unmarked graves so that they will know who the graves belonged to, Cosby said.

“The markers in that cemetery date back to 1835,” Cosby said. “Slaves, former slaves, Native Americans and African American veterans of the Civil War and both World War I and World War II are some of the people who were laid to rest in the cemetery.” 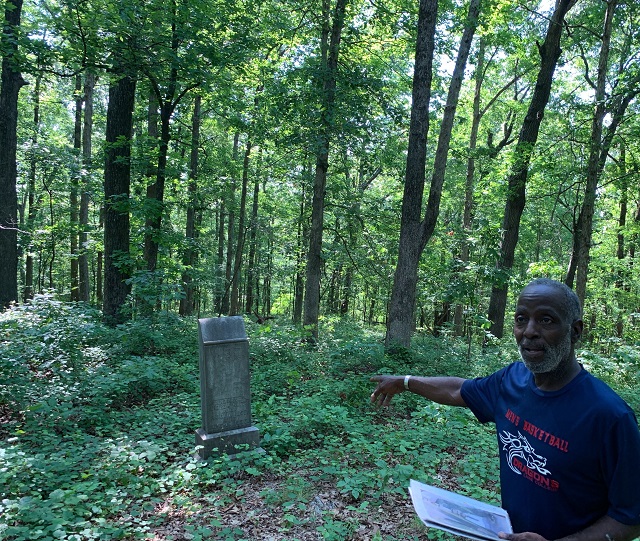 Across the Nation, major corporations, including Nike, Target and Google, will recognize Juneteenth as a paid holiday for their employees beginning this year.

Jones said the NAACP DeKalb County Branch is working tirelessly to have Juneteenth recognized as a paid holiday in Georgia.

“We are pushing for the state of Georgia to make it a holiday,” she said. “To get the day off like the Fourth of July.”

Since some people are choosing to celebrate Juneteenth as their Fourth of July, Smith wants to make sure that people understand that celebrating Juneteenth is not meant to disrespect the Fourth of July in any way – but to commemorate the day when Black people were freed.

“Black people were not free on July 4, 1776,” she said. “We were not even citizens at that time. On June 19, 1865 — that’s when slaves were free. I’m not being disrespectful to your culture but I’m going to celebrate mine. That’s why Irish people celebrate St. Patrick’s Day or other cultures celebrate special days within their culture. We should be allowed to celebrate things within our own culture without being scrutinized.”

Here are some other Juneteenth events happening in our area: