Martial arts training continues with the help of Zoom, social distancing and masks

Martial arts training continues with the help of Zoom, social distancing and masks 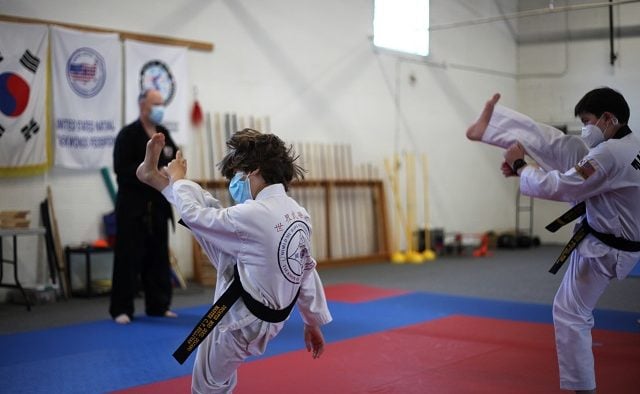 Although businesses have started to open back up, safety measures are in place to stop the spread of COVID-19. At Decatur Martial Arts Academy, in-person instruction just started back up, with class sizes limited to 10 and everyone in the school required to wear a mask at all times. Still, to the side of these kicking students is a Zoom call with more students, who doing their kicks from home. Photo by Mary Margaret Stewart.
Share

Greater Decatur, GA — Claude Sullivan was in the seventh grade back in the 80s, when the iconic martial arts movies were released, and by 14 years old, he knew that he wanted to be a martial arts master.

Flashforward to 2002 – Sullivan founded Decatur Martial Arts Academy. And some of his students today have been with him since the beginning, 18 years ago.

“I’ve lived in the Atlanta area almost all of my life. There weren’t any martial arts schools in Decatur area or very few if any,” he said. “So I checked down at the Kroger shopping center [in North DeKalb] and there was a spot there – 2000 square foot spot, and it looked perfect. I just went from there.”

Sullivan’s academy stayed in that shopping center for eight years before moving to their current location on North Decatur Road, where it’s been for 10 years now.

“We have a core group, I’d say, of long-term students. Of course, like anything else, there are people in and out, but we have a good record of people achieving their black belt, which normally takes three to five years,” he said. “We have a solid amount of people that go at least that far, if not further.”

With a black belt, there’s nine levels or degrees, which Sullivan said can take 40 years and become “a lifelong practice.” 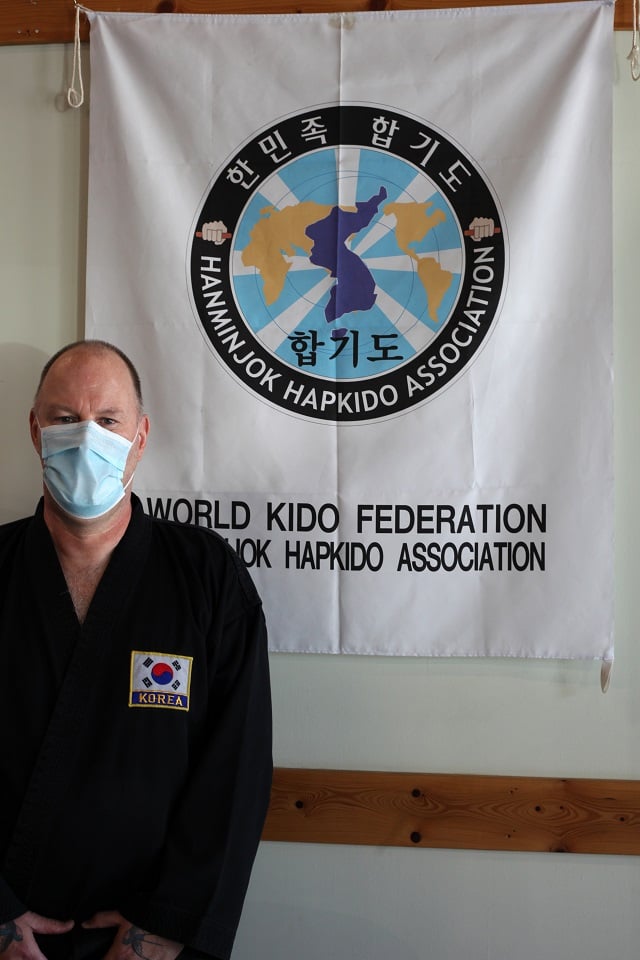 While Claude Sullivan gets practice in his martial arts through teaching, he’s the Georgia Representative for the World Kido Federation in Korea, where he goes every few years for training. In addition, he has an instructor of his own in Winder, Ga. to keep his skills sharp. Photo by Mary Margaret Stewart.

In addition to his students, Sullivan’s wife and son both have their black belts, too. His wife Alicia is a master instructor as well as the membership director of the academy, and his son participates in some of Sullivan’s classes.

Decatur resident Mike Lobdell, his 13-year-old daughter and his almost 17-year-old son all have their black belts. It’s been over eight years since his kids started taking classes at Decatur Martial Arts Academy, and spending time in the academy for a few years inspired Lobdell to start learning, too, about six years ago.

“I’d been sitting there on the sidelines playing around my phone and realized I can get out there and can get exercise, spend time with my kids, and just learn something new – that’s what appealed to me,” Lobdell said.

Coronavirus hasn’t stopped the academy’s students from learning, though, including the Lobdell family. They’ve been taking their martial arts classes together via Zoom in time of quarantine. It’s been an adjustment, though, inside their house, which is a more confined space than the academy’s mats.

“But when the weather is nice, we’ll go out in the front yard, and the neighbors give us funny looks for jumping around,” he said.

While the academy has been offering Zoom classes for the past two-and-a-half months, Sullivan said it was an adjustment for him, too.

“I set up my computer here in the school, and it was strange at first because I’d be the only person on the mat, and they’re all on the computer screen,” he said.

Other than the barrier of the screen, the classes have run the same way as if the class was in the school, starting with a 15-minute warmup and going through the different patterns of kicking and punching.

Starting on Saturday, May 23, the academy reopened to offer in-person classes in tandem with Zoom classes. Classes are limited to 10 students and everyone must wear a mask.

And while some gyms and businesses alike have reopened, there’s something different about the practice of martial arts.

“I like exercising a lot, and one day varies a lot,” Lobdell said. “I like the bike and I’ll do some running and stuff like that, but that’s pretty much the same from one day to the next. One training class is very different. We usually go like Tuesdays, Thursdays, and Saturdays, and they’ll do three very different lessons, working three different areas of the body.”

Sullivan said that while “you’re definitely going to get physical exercise” each person can get something different out of it, making it a special practice.

“While getting physical exercise, you’re learning self-defense skills as well, which I think puts it above just going to the gym,” Sullivan said. “I don’t have any problem with gyms – I go to the gym. I’m just saying, you’re actually learning a skill as you move along. You learn patterns, which are almost meditative. It’s really a mind and body combination.”

To learn more about the Decatur Martial Arts Academy, check out: http://decaturma.com.