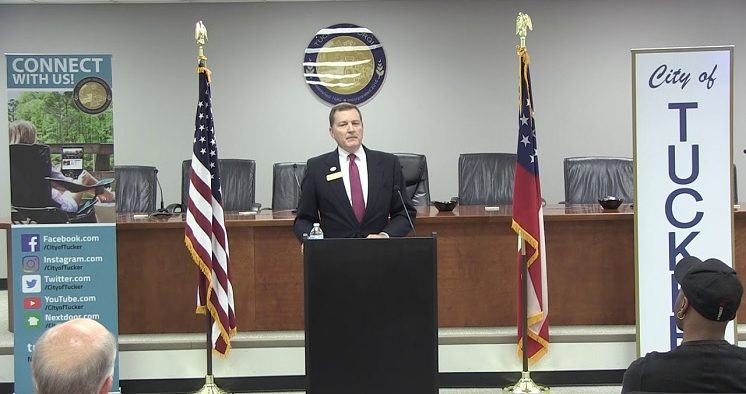 Tucker, GA — Activists showed up June 8 at the city council meeting, prepared to speak publicly about their cause – a push for Tucker to adopt a non-discrimination ordinance (NDO).

Instead, they got a meandering speech by Mayor Frank Auman and a vague social justice resolution.

An NDO, says the activist group Tucker Open Door, is designed to protect those working, living, and doing business in Tucker from discrimination in employment, housing, and providing goods and services. Chamblee, Doraville, and Clarkston adopted NDOs in the last year.

“One thing I learned is that if your political philosophy begins with, ‘There are only two kinds of people in this world’ then you are part of the problem,” he said. “There are lots of reasons, lots of reasons. I may not post all of my feelings on social media. But for you to tell me that unless I do, unless those feelings agree with yours, I am a racist? I submit that you are part of the problem.”

Auman continued, “If you tell me, ‘Silence is violence,’ that there are two kinds of people – you’re silent or you’re not? I say to you, ‘You’re part of the problem.’ Because there are lots of reasons, including discretion being the better part of valor, including not provoking an argument, that I might not want to go splay my feelings all over social media. I’m a living example that it is possible to believe black lives matter without supporting the organization of that goes by that name.”

He went on to say that individuals are responsible for “rooting out” their own racist beliefs.

“To the extent that they are in my psyche, it’s up to me to learn to recognize them and to root them out one at a time,” the mayor continued. “There is not enough paper in the world to write the necessary laws. There are not enough police in the world to enforce the laws. There’s not an army big enough to back up the police to make me come to that point.

“We had Reconstruction, Civil Rights Act, Voting Rights Act, Brown v. Education, affirmative action, quotas, preferences, a whole lot more and the problem still hasn’t been eradicated. It is not a problem that is going to be solved by more laws. Although we are going to pass some, there are some things we can do. This problem is not going to be solved by passing more laws. It depends on me to recognize my own flaws. That’s true for every one of us, every one of y’all, wherever those unhealthy views might come from.”

Auman’s voice shook as he recounted listening to the testimony for Ahmaud Arbery’s trial. “It’s a dangerous undertaking to try to punish people for their thoughts … when I heard the account from the Ahmaud Arbery preliminary hearing last week, it became clear. Undeniable. Hate crimes happen.”

Auman was applauded after reading Tucker’s “Resolution Urging Action Regarding Social Injustice Suffered by Black Americans” which asks U.S. Congress and the Georgia General Assembly to “enact, strengthen and clarify laws regarding crimes and civil acts, and to add substantial punishment in the form of imprisonment, monetary fines, probations, restitution or other means.”

Although it refers to House Bill 426 to revise the criteria for punishment for crimes involving bias or prejudice, it does not specifically name the bill.

Tucker residents were still eager to share their message after Auman spoke at length. Resident George Wellborn called on the City Council to “put power to your words” by adopting the non-discrimination ordinance.

Maria Fernandez said, “Please take this to the next step. You’ve been sitting on this non-discrimination ordinance for a while.”

Messages left with Tucker Open Door were not returned. In response to last night’s city council meeting, the group posted on their website: “The City Council unanimously passed a resolution asking the State to pass a Hate Crimes Law. The State of Georgia can pass HB 426  this year if the legislature chooses to act this session. We are proud of our Mayor and Council for taking this important stand. We ask them to follow this Resolution with local action for justice and against discrimination by adopting a non-discrimination ordinance for the City of Tucker.”

A call to Black Lives Matter Atlanta for a response to Auman’s remarks was not returned. Decaturish attempted to interview Black residents of Tucker for this story prior to publication, but those efforts were unsuccessful.

Correction: A person in this story was misidentified. This story has been updated with the correct information.