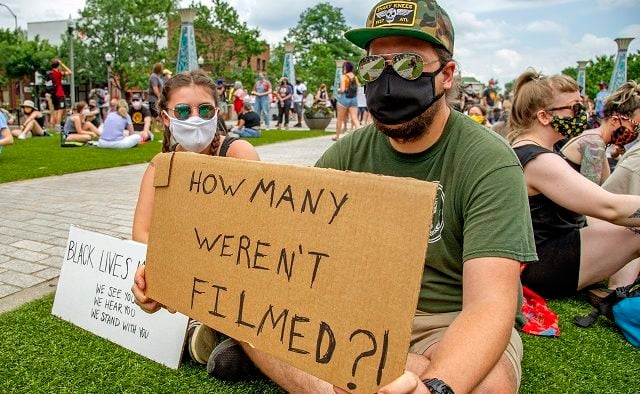 Decatur, GA — A peaceful group of Decatur residents gathered on Wednesday afternoon in the Square to support the Black Lives Matter movement and remember the people of color who have been killed by police brutality and white supremacy.

The group of about 1,000 people assembled around the Decatur Square bandstand to hear from several speakers, including Chaléah Head, the Georgia State University student who organized the protest, Clare Schexnyder, a representative for the recently-formed Anti-Racist Coalition for Decatur, and members of the Black Panthers Revolutionaries Atlanta Chapter.

Rev. Jenna Faith Strizak, Associate Rector at Holy Trinity Parish Episcopal Church in Decatur, offered an opening prayer for the demonstration. Other members of the clergy were also in attendance.

Head led the crowd in chants of “No justice, no peace,” and chanted the names of George Floyd and Breonna Taylor, who were killed by police officers, and Ahmaud Arbery, who was killed in February by two men in Brunswick, GA.

Head stated that although Derek Chauvin, the officer who had kneeled on George Floyd’s neck, has been arrested and charged, the other three officers that were there at the incident should also be charged. “First-degree murder, not manslaughter,” she said, and the crowd echoed.

Charges against the other officers were announced today, June 3.

“Enough is enough,” said Head, who was emotional as she spoke to the crowd. “Thank you all for coming out today.”

Schexnyder spoke on behalf of the Decatur Anti-Racist Coalition, echoing Mawuli Davis’ statement in front of city hall on Friday that “If it can happen anywhere, it can happen in Decatur,” referring to holding town halls and workshops focused on anti-racist education. Schexnyder led a chant of “white silence equals violence,” and emphasized the importance of white people “doing the work” of anti-racism themselves instead of relying on Black people.

Schexnyder passed the mic to Head, who broke the news to the demonstration that all four officers in the George Floyd case had just been charged. Cheers and chanting of “charged!” went up from the crowd.

Another speaker implored the crowd to call the phone number for the Stand With Bre foundation, which automatically routes callers to legislators. The Stand with Bre foundation recommends callers to demand that the officers involved in Breonna Taylor’s case be fired and prosecuted and that a special attorney is assigned to the case.

Schexnyder read from an extensive list of people who had been killed by police officers, and the crowd echoed each name.

The Atlanta chapter of the Black Panthers Revolutionaries Atlanta Chapter then spoke, saying they wanted “a display of strength, unity, and peace,” and that they were protecting the demonstrators with a peaceful display of arms.

“What we represent is bigger than ourselves,” said one member. “We have to go back and we have to touch history, because we have to pay tribute to who came before us, in a representation of who we are.”

“I don’t like saying ‘black lives matter,'” said another member. “Why? Because we shouldn’t have to say it.”

“I’m here to be in solidarity with the folks organizing, to show support for Black lives, and to just listen, really,” Rev. Jenna Strizak told Decaturish. “I think for me as a clergyperson, I see this as part of witnessing to God’s love and to proclaim God’s love for all and God’s justice for all.”

A 2019 Decatur High School graduate named Jen said she’s been “intensely following what’s going on” in the Decatur community. “I can’t speak for the community but I personally feel a lot of outrage and emotion towards it. I’ve definitely felt powerless just being quarantined and being in my home, and there’s only so much an Instagram post can do. But also I feel worried about going into downtown [Atlanta] because of potential violence and also that we’re in a pandemic. I feel most comfortable here [in Decatur] and I think local protests are just as important as ones that get national attention.”

“I think a lot of times Decatur is thought of as being so liberal, but I think we all know that there’s still a lot of covert racism that happens,” said another 2019 DHS graduate named Maria. “That’s why I’m here, because I do love Decatur and I think it can get better.”

A 2017 graduate of Decatur High School named C.J. said that he also feels that while Decatur portrays itself as “an open community,” there are things that “get swept under the rug.” 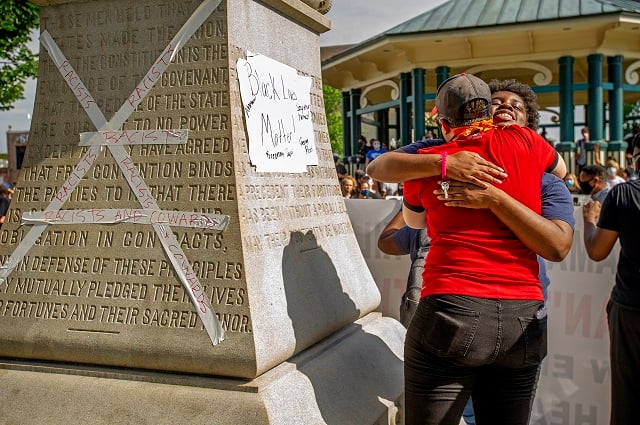 Demonstrators taped over the Confederate monument in the Decatur Square during a protest on June 3. Photo by Dean Hesse

A few demonstrators edited the text of the obelisk Confederate monument in the Square by scrawling in Sharpie over strips of white duct tape, labeling the Confederacy as racists and cowards.

One man named Justin who came out to see the protest felt that it “wasn’t disruptive enough.” He said that he was “all for a peaceful protest,” but didn’t like how contained it was, that people could drive past the Square and not know what was going on.

A few demonstrators also expressed frustration while Schexnyder was speaking, calling for her to “get off the mic” and “let the people of color speak.”

By 6 p.m., the crowd was thinning. Kids played in the astroturf and neighbors chatted after long weeks of sheltering in place. Sun-weary people enjoyed popsicles and bottled water passed out by other demonstrators. A small group was offering Revolution Doughnuts. A couple sat down for dinner on the patio of Iberian Pig, and a server wearing a surgical mask explained the menu. If not for the abundance of protest signs, the police intently watching the crowd, and everyone wearing a mask, it almost could have passed for a normal June evening in Decatur.

Correction: An earlier version of this story misidentified a group speaking at this event. The group that spoke at the event was the Black Panthers Revolutionaries Atlanta Chapter. This story has been updated with the correct information.