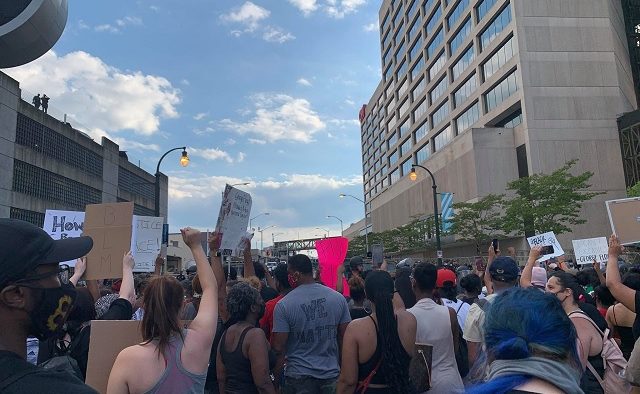 Photo from this weekend's protests in Atlanta. Photo provided by Hannah Hill
Share

Atlanta, GA — A weekend of protests in Atlanta over the death of George Floyd in Minneapolis resulted in numerous arrests, multiple businesses damaged and at least two police officers fired for misconduct.

It was one of the numerous protests around the nation over the incident which occurred on May 25. An officer, Derek Chauvin, placed his knee on Floyd’s neck, choking him to death. After a public outcry, he was charged on May 29 with third-degree murder a few days later, but other officers at the scene have not been charged.

It was too little too late for activists fed up with police brutality and systemic racism in the United States. They took their fight to the streets on May 29, a protest that stretched into Sunday.

“The incident was caught on video widely circulated on social media that showed five officers tasing a Morehouse and a Spelman student – identified as Messiah Young and Taniyah Pilgrim – in their car on International Boulevard near Centennial Olympic Park,” INtown reported.

The officers were identified as Mark Gardner (23 years with APD) and Ivory Streeter (17 years with APD), who both worked as investigators with the department’s fugitive unit, INtown reported.

There’s some debate about whether the people responsible for the looting, vandalism and violence in Atlanta were part of the protests or were actually outside forces taking advantage of the situation to create chaos.

INtown reported, “Mayor Bottoms said the weekend’s violence was not protest, but chaos orchestrated by ‘disruptors’ and ‘anarchists’ who came to ‘destroy this city.’ Similarly, APD Chief Erika Shields called those who incited violence a ‘highly calculated terrorist organization’ embedded inside peaceful protests.”

The newspaper further reported that, “Media on the ground witnessed protesters arriving and leaving flashpoints with out-of-state or obscured license plates. Social media was buzzing, not only in Atlanta but around the country, that agitators were embedding themselves into peaceful protests then committing many of the acts of looting, vandalism, and arson. Loud fireworks and incendiary devices launched into crowds and at police appeared designed to scare and agitate the situation.”

The possibility of interference by “agent provocateurs” prompted the Beacon Hill Black Alliance for Human Rights to postpone a protest planned for downtown Decatur on May 31. The planned rotest was in response to racist videos featuring Decatur High students using racial slurs. In the most recent video, a student was filmed holding what appears to be a toy gun while threatening to kill Blacks.

While some people speculated that Decatur’s recent racial controversies would make it a target for similar protests, the city got through the weekend without incident.

Decatur Police Chief Mike Booker posted a message on Facebook Sunday evening saying the department will get rid of any officer who compromises the public’s trust.

“We will not stand for our officers to lie, cheat, or steal and we certainly will not allow any officer to work with us that does not have compassion and empathy for all citizens in our community,” Booker said. “We do have the responsibility to make sure that people in the City of Decatur operate within the confines of the law. In all of our actions, safety comes first and the use of excessive force is never acceptable. Our officers are trained to de-escalate situations and to use dialogue and respect in all situations.”

Even so, the racist incidents in Decatur have put the community on edge.

On Thursday, May 28th, Beacon Hill Black Alliance for Human Rights released a statement demanding a meeting with the City of Decatur Mayor, Mayor Pro Tem, Police Chief, City Manager, and School Superintendent “to discuss the rash of racially motivated incidents that have occurred in the City of Decatur over the past few weeks.”

On Friday at 10:30 a.m., members of the community and the media gathered outside city hall on North McDonough Street. There was some confusion about whether the meeting between activists and the city officials would take place. It was determined that a formal meeting would not take place, but there were a series of speakers who attended the event, including Decatur Mayor Patti Garrett.

Members of the Decatur High School Black Student Union released a statement saying they want to see action, not talk, from local officials.