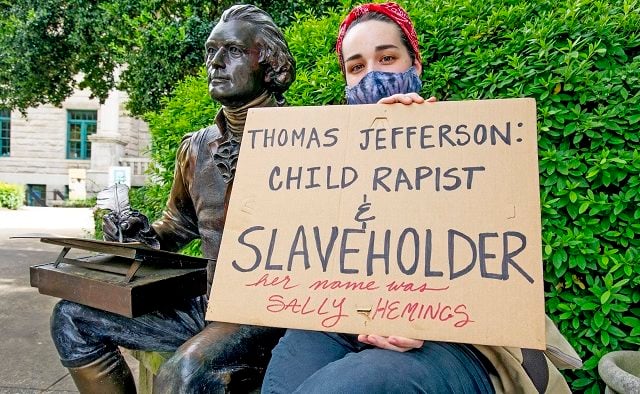 FILE PHOTO: A person who said they were born and raised in Decatur sits next to the statue of Thomas Jefferson in front of the old courthouse during a peaceful demonstration sponsored by the Beacon Hill Black Alliance for Human Rights June 7. Photo by Dean Hesse.
Share

Decatur, GA —  A statue of Thomas Jefferson in downtown Decatur in front of Decatur’s old courthouse has been removed.

The statue was removed on the morning of June 19, Decatur City Manager Andrea Arnold said.

Mayor Pro Tem Tony Powers previously said the statue belongs to a private individual and was removed at their request. Arnold said the statue would be removed “to protect it from damage.”

Jefferson, one of the country’s founding fathers, has received renewed scrutiny in recent years. He owned more than 600 slaves and raped one of his slaves, Sally Hemings, who gave birth to six of his children. Because Jefferson was Hemmings’ master, the relationship would not have been consensual.

It is the second monument removed from downtown Decatur within the last week. The county on June 18 dismantled and removed a large Confederate monument from the square, delighting activists who have been asking for it to be removed for years.

The monument purported to commemorate history, but for many people, it was an artifact of hatred and white supremacy.

Other activists are calling for the county to remove a cannon from the Square marking the “Indian War” of 1836. It was used in the 1836 Creek War, which resulted in the forced relocation of native people along the Trail of Tears to Oklahoma where most of the Creek nation now resides.