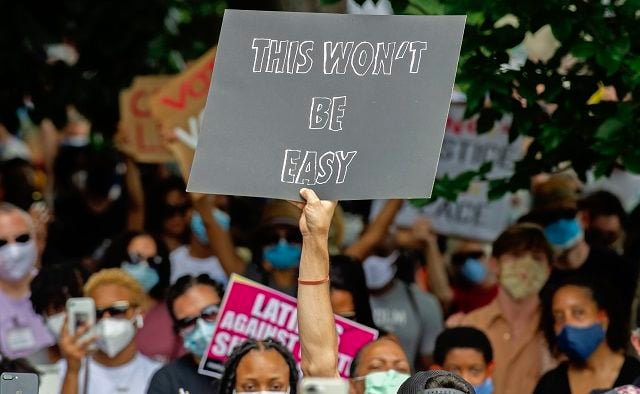 Protestors filled the Decatur Square during a peaceful demonstration organized by the Beacon Hill Black Alliance for Human Rights on June 7. Photo by Dean Hesse
Share

The Anti-Racism Speaker Series is a collaboration between The Better Together Advisory Board and the City of Decatur. It is “designed to generate awareness of equity concerns in the city and to hold the city accountable for meeting established goals and implementing policies to achieve the aspiration of being an inclusive, equitable and just city,” according to a statement provided by Harris.

The Speaker Series includes a series of thought leader speakers/teachers/activists to challenge and inspire the community to take actionable steps to inculcate anti-racism throughout our city. The series consists of a monthly speaker from August – December and includes launching a suite of programs after each lecture that involves readings and discussion groups. The goal is to galvanize community informed policy changes.

The talks will take place remotely on livestream, and will be recorded. More information about livestreams will be released closer to the event dates.

(August 27th, noon to 1 pm) Jane Elliott is an internationally known teacher, lecturer, diversity trainer, and recipient of the National Mental Health Association Award for Excellence in Education, who exposes prejudice and bigotry for what it is, an irrational class system based upon purely arbitrary factors.
In response to the assassination of Martin Luther King, Jr. in 1968, Jane Elliott
devised the controversial and startling “Blue Eyes/Brown Eyes Exercise.” This, now
famous, exercise labels participants as inferior or superior based solely upon the color of their eyes and exposes them to the experience of being a minority.

(September 17th, 6:00-7:30 pm) Catherine Meeks, Ph.D. is Executive Director of the Absalom Jones Center for Racial Healing. A sought-after teacher and workshop leader, Catherine brings four decades of experience to the work of transforming the dismantling racial work in Atlanta. The core of her work has been with people who have been marginalized because of economic status, race, gender or physical ability as they pursue liberation, justice and access to resources that can help lead them to health, wellness and a more abundant life. She characterizes herself as a midwife to the soul of her students and workshop participants. She is frequently asked to present commentaries on Georgia Public Radio and other radio and television programs. She is the author of six books and one inspirational CD and is the editor of the bestselling Living Into God’s Dream: Dismantling Racism in America
and co-author of Passionate for Justice: Ida B. Wells as Prophet for our Times.

(November 5th) Andra Gillispie is Associate Professor of Political Science and Director of the James
Weldon Johnson Institute at Emory University. Her teaches classes on political
participation, experimental methods, race and elections. She is the author of The New Black Politician: Cory Booker, Newark and Post-Racial America and is the editor of and a contributor to Whose Black Politics? Cases in Post-Racial Black Leadership.

The Urban Section of the American Political Science Association honored her as a
2009 Norton Long Fellow. She was a 2009-2010 Ford Foundation Diversity Post-Doctoral Fellow in the Center for African American Studies at Princeton University and in 2011-2012, she served as a Martin Luther King Visiting Scholar in the Political Science Department at the Massachusetts Institute of Technology. She has appeared on local ABC, NBC, Fox, CBS and PBS affiliates as well as CNN, NPR and FamilyNet.

(December 10th) Tim Wise is among the most prominent anti-racist writers and educators in the United States. He has spent the past 25 years speaking to audiences in all 50 states, on over 1,000 college and high school campuses, at hundreds of professional and academic conferences, and to community groups across the country. He has trained corporate, government, entertainment, media, law enforcement, military and medical industry professionals on methods for dismantling racism in their institutions.
Wise is the author of eight books, including his forthcoming Dispatches from the Race War (December 2020 from City Lights Books). Named one of “25 Visionaries Who are Changing Your World,” by Utne Reader, Wise has contributed chapters or essays to over 25 additional books and his writing are taught in colleges and universities across the nation.