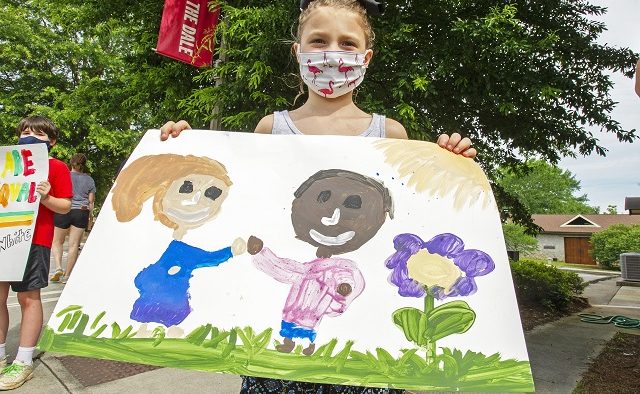 A young girl holds a painting she made during a peaceful protest against racial injustice in Avondale Estates June 6. Photo by Dean Hesse.
Share

As the number of confirmed coronavirus cases are rising again, cities in the state are beginning to require citizens to wear masks. The cities of Atlanta, Athens, Brookhaven, Doraville, East Point and Savannah have recently passed face mask ordinances and executive orders, according to WABE.

The Decatur City Commission also has approved a mask mandate.

Avondale is following suit and considering a mask mandate within the city’s central business district and potentially other public spaces.

“I think that we have a responsibility to do something to protect our citizens better than we currently are. I think the data shows that if everybody wears a mask the chances of transmission are 10% or less,” Mayor Jonathan Elmore said.

The Centers for Disease Control and Prevention has recommended that people wear cloth face-covering in public settings and when interacting with people outside of the household. The CDC also says that “cloth face coverings are more likely to reduce the spread of COVID-19 when they are widely used by people in a public setting.”

Elmore stated that his goal was slightly different and he wants the city to do as much as it can to protect its residents.

Commissioners also discussed having the police department or code enforcement officers issue a warning first and then a citation with a fine for those who don’t comply. The commission has yet to determine who will enforce the resolution.

Concerns were raised on how to enforce the mandate and in what situations officials would get involved.

Commissioner Dee Merriam mentioned having some flexibility outside so residents will be able to exercise outside without wearing a mask. She also suggested that masks not be mandated outdoors when social distancing can be maintained.

City Attorney Stephen Quinn said that if someone is by themselves jogging and passes by another person quickly, then the resolution would not apply to that situation. But residents would be required to wear a mask if they’re waiting outside of a business or congregating in groups.

The resolution appears to mainly be targeted toward groups of people inside public spaces, especially restaurants and retail stores within the city’s central business district, Commissioner Brian Fisher said.

“The way I would see it is that we’ve got someone at a retail establishment who’s decided that they’re not going to wear a mask and they’re not going to go anywhere,” Fisher said. “That owner or manager would call the police. The police would come and remind them of our (resolution) and ask them to put a mask on. If they don’t, they can either leave or they can get fined.”

Quinn added that the original resolution could be revised to say that people must wear a mask when on public property or waiting to access public spaces unless they can consistently be six feet apart from others, not including people they live with.

City Manager Patrick Bryant suggested a provision saying that if someone is waiting in line or congregating then they have to wear a mask.

He later added that the keyword would be “congregate.” Residents would be required to wear a mask if they are within six feet of someone they are not related to except for in outdoor spaces that are not available to the general public, Elmore and Bryant explained.

Overall, the board agreed that masks would be required indoors and that officials could give a warning before issuing a citation. Details of enforcement and guidelines for when and where to wear a mask are still being finalized by the city attorney and the city commission.

The commission will meet again at 5:30 p.m. on Monday, July 13, through Zoom to vote on the mandatory mask resolution.

In other news, the Avondale Estates also discussed the interim phase one of the Town Green project, which includes a park and a mixed-use building along Highway 278/North Avondale Road.

The city had to change plans slightly as the mixed-use building, which was condominiums over retail space, is unable to be funded at this time.

“It was agreed that we could revisit that possibility once funding becomes available again however we would also like to move forward with the construction of the park and in doing so come up with some sort of interim solution for the commercial space while that park is being constructed and during its initial time where it’s operable,” Bryant said.

The issues Jerry Miller of Fabric Developers presented included acquiring rights of way in order to connect Parry and Washington Streets along the northern edge of the park. This area includes the Lifeline property and property owned by Avila.

The proposed connection raises the northeast corner of the park by six feet in order to create a large flat lawn for events, reduce the grade change along the northern boundary of the park and provide flat access along the extension of Lake Street to the new intersection, according to the presentation documents.

The city commission gave Bryant and city staff permission to acquire the rights of way for that project so the connector will be constructed at the same time as the park.

Fabric Developers also presented a city with a plan for an alternative solution for the space that will eventually be underground parking. Fabric proposed to regrade the area and take it down eight feet, instead of 12 feet, to create a shelf that could be used for farmers markets, food trucks, parking, etc. The use of the space is flexible. Restrooms would also be added to that space.

Miller said the plan ensures Fabric and the city don’t take steps backward with constructing phase one or with the mixed-use development by destroying sections of the park. He said a couple of elements will be added, including steps leading to the grand patio.

Miller said the interim phase one would cost about $600,000 to $650,000 but thinks the cost could decrease if parts of the project are done at the same time.

The cost of the design for phase one will be incorporated within the budget that Fabric originally proposed to the City Commission, Miller added.

He later added that the construction of the connection between Washington and Parry Streets is included in the initial cost of the project that the board previously approved.

“The park itself was about $4 million and streetscapes were another $1 million. That would build the streets around the park. Then there was another $1 for stormwater detention,” Miller said. “At least conceptually there was a number in there for those streets, not including right of way acquisitions.”

Bryant and city staff plan to move forward with acquiring the rights of way for the connection between Washington and Parry Streets.