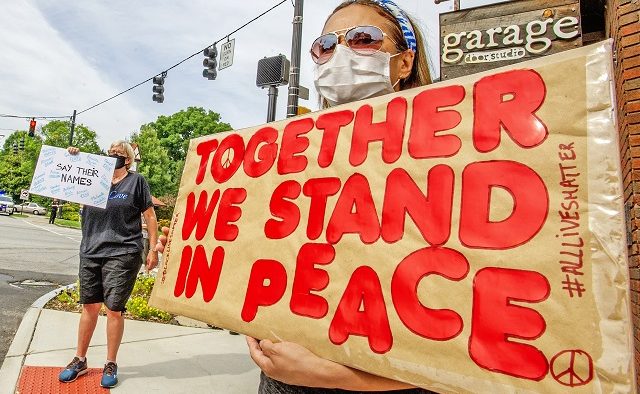 Organizer Carol Calvert on left and other residents of Avondale Estates came together for a peaceful protest against racial injustice June 6. Photo by Dean Hesse.
Share

“My intent was to do everything we can as a city to protect public health, to protect everybody,” Mayor Jonathan Elmore said. “We are trying to do what we can at this point in time to encourage everyone to wear a mask.”

Mayor Pro Tem Brian Fisher voted no. At the special called meeting last week, he said his intent was to require people to wear masks in public spaces, specifically in stores and restaurants, to help take some burden off of business owners who were requiring masks.

He raised concerns about enforcing the resolution. Fisher said he doesn’t want police officers feeling like they need to go around and stop people who are walking and ask if they live together and if they have a mask.

He also had concerns about police officers stopping groups of kids who are walking around the city.

“Think about in the current environment that we’re in we’ve got a bunch of kids walking around the lake and we put an officer in a position where they have to stop them, determine whether they’re in a familiar unit,” Fisher said. “Putting our police in that situation seems absolutely ludicrous to me right not when the intent was to protect our businesses.”

A previous draft of the resolution stated the people must wear a mask if they are waiting outside to enter a business. Fisher said he was ok with officers asking questions in that case but would prefer that officers don’t stop groups of kids or people beyond that situation.

The resolution says that face masks will be required in public places. All customers, employees and other users of restaurants, retail stores and all other public places must wear a mask while indoors.

All people must also wear a mask while outdoors where they cannot stay six feet apart from others whom they do not live with.

Some concerns were raised about how police officers would establish whether or not a group of people live together and if officers would have to stop residents and ask.

City Manager Patrick Bryant said that anyone who is congregating without wearing a mask could be subject to questioning. He added that this would be the only way to enforce the resolution objectively.

“Every law that’s passed needs to be enforced to the letter of the law otherwise, we subject ourselves to potential legal action,” Bryant said.

City Attorney Stephen Quinn added that law enforcement officers use discretion but the goal of an ordinance or a resolution gives officers a standard that is objective.

According to the resolution, reasonable exceptions for wearing a face mask include:

– People whose religious beliefs prevent them from wearing a face-covering

– People who are eating or drinking

– People complying with law enforcement or for verifying someone’s identity

The city manager will designate who will enforce the resolution. At the special called meeting, Bryant said the police department is best equipped to enforce the mandate.

Police officers will first give a warning and an opportunity for people to put on a mask or leave the public area. Officers will also offer masks when issuing a warning.

Elmore said that he wants officers to have masks in the police cars so they can offer them to residents and visitors before giving warnings or citations.

“The point here is to get people to wear a mask. It’s not to interrogate people,” Elmore said.

If someone refuses to comply after being given a warning and offered a mask, they are then issued a citation. If a person is convicted of violating the resolution, they will be given a fine of $100 by the Municipal Court.