Commercial vacancy rate in downtown Decatur has tripled since March

Commercial vacancy rate in downtown Decatur has tripled since March 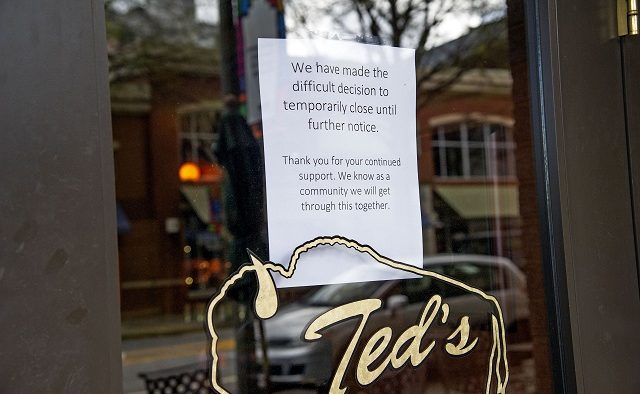 Ted’s Montana Grill was temporarily closed due to the COVID-19 pandemic, but Tomorrow's News Today says that it is now closed for good. It's one of several local restaurants that have shut down temporarily or permanently since the start of the pandemic. Photo by Dean Hesse
Share

Decatur, GA — The Downtown Decatur Development Authority board voted Friday to pass a markedly more conservative budget for fiscal 2020-21 due to an anticipated economic slowdown caused by the COVID-19 pandemic.

The authority’s budget anticipates approximately $958,000 in expenditures for the year, about a 23 percent decrease from the 2019-20 budget. Anticipated income is set at $1.17 million.

“[The authority’s] income has largely stayed the same, but we are anticipating some decreases this year based on what we have seen over the last four months or so,” said Angela Threadgill, Decatur’s Director of Planning and Economic Development, during a discussion of the proposed budget at the DDA’s regular meeting.

The budget reflects the board’s priority on rebuilding its fund balance for the coming year. The authority used a significant portion of their reserve to support the Decatur small business loan program and anticipates that it may be called upon to do more in the coming year.

“I think that it is a good thing that we prioritize contributing to the fund balance,” board member Conor McNally said during the meeting. “I think that there are a number of line items on our revenue side that are at some risk. And, there may be some need or opportunities where we could step into some situations with some capital. So, I like the way we are coming at it.”

In addition to rebuilding its fund balance, the authority will prioritize marketing and promotions, particularly related to downtown office space, Threadgill said.

“This is important so that we can be resilient coming out of COVID-19,” she noted. “That is one of our higher priority items in terms of expenses.”

To that end, the board voted to approve a six-month contract extension with the marketing firm, The Wilbert Group, to continue its work with the office space campaign.

Their existing contract ended June 30 and the extension would cover the months of July through December. The new contract authorizes the city to pay for up to $24,000 of services related to marketing the city’s office space to companies in the metro area.

One sign that those efforts may be paying off is the recent decision by the Emory University School of Nursing to lease 70,000 square feet of space 250 East Ponce de Leon, McNally said.

“That is probably the biggest new lease that we have signed in the city,” he said.

The school’s lease will cover four floors in the building at the corner of East Ponce de Leon and Candler Street, with an estimated enrollment of 1,400 students at that location.

“Overall, I think that the office marketing campaign has helped keep us front and center, and this is a huge commitment of space,” McNally added.

But while office leasing may be on the upswing, the city is still concerned about the number of small downtown businesses that are closing during the pandemic.

A number of restaurants have recently announced they will permanently close, Shirley Baylis, Decatur’s Downtown Program Manager told the board.

“Fellini’s and Highland Bakery have closed in the city,” Baylis said. “We are unsure how long Atlantic Noodle will be able to stay open given that they have had a family tragedy. It seems that most of our businesses that we are losing are in the West Ponce area.”

Editor’s note: The Fellini’s closure was only temporary, according to an employee of the company. The restaurant confirmed on July 13 that the restaurant had closed for a “couple of days” but it has since reopened.

Baylis also noted that the city is monitoring the evictions that Selig Enterprises has been pursuing in the city of Atlanta given that Selig also owns significant space in downtown Decatur.

“I can just hope that our businesses are able to pay their rent and avoid eviction,” she added. “That would significantly affect our West Ponce area.”

Before COVID-19 hit, the city had been running about a 3% vacancy rate for commercial space, Threadgill said. In the four months since Georgia has seen widespread transmission of the virus, that rate has grown to 9%.

There have been some new leases signed for the available spaces and several inquiries from other interested businesses, she said.

“Shirley has been doing a great job of keeping an ear to the ground and finding businesses that want to relocate and connecting them with the spaces that are available,” Threadgill said.

The city is still exploring what resources it can marshal to help small businesses that are struggling, Threadgill added.

On a positive note, almost all of the businesses that were approved for loans through the joining city of Decatur and DDA-sponsored emergency loan program have received their funds.

“Less than a handful that businesses are still reviewing loan documents,” Threadgill said. “Most businesses have received the funds.”

Additional donations made to the Legacy Park fund through the end of June also allowed the city to partially fund a 28th loan application.