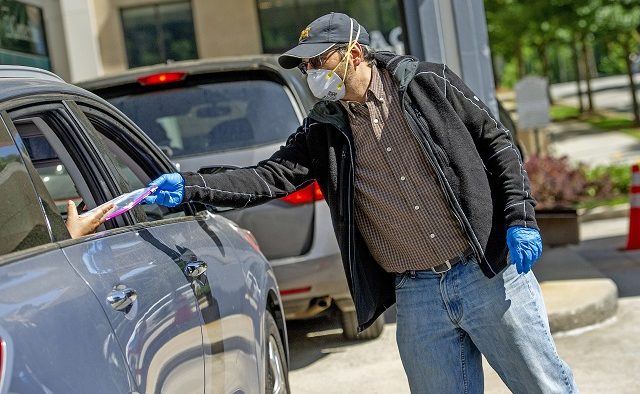 Decatur, GA — After confusion and deliberation, Decatur City Commission passed an ordinance requiring the use of face coverings during the COVID-19 pandemic in a specially-called meeting Friday morning.

Initially, during the public comments section of the meeting, residents expressed support for the ordinance.

The ordinance applies to the city limits of Decatur and requires the wearing of a face covering or a mask while in a public place:

Public place means any place other than an individual’s home, including the curtilage thereof, or a personal vehicle.

(c) All establishments in the City of Decatur shall require their employees to wear a facial covering or mask at all times while having face-to-face interaction with the public.

The ordinance defines an establishment as:

any business, store, or other place where goods or services are sold or provided as part of a commercial or non-profit venture, to which the public is invited or in which the public is permitted. The term establishment includes but is not limited to the following:

(1) automobile dealerships, furniture or other showrooms for the display of merchandise offered for sale;

(2) grocery, pharmacy, specialty, department and other stores which sell goods or merchandise;

(3) service stations, stores or shops for the repair or maintenance of appliances, shoes, motor vehicles or other items or products;

(6) the common areas of commercial, retail and office buildings;

(7) the common areas of public buildings and structures;

(8) banks, savings and loan offices, and other financial establishments;

(9) hotels and motels and other places that provide accommodations to the public; and

Face coverings and masks will not be required during the following circumstances:

(3) During outdoor physical activity, provided the active person maintains a minimum of six (6) feet from other people with whom they do not cohabitate at all times

(4) While drinking or eating

(7) When complying with the directions of a law enforcement officer or for the purposes of verifying a person’s identity, such as when purchasing alcohol, tobacco, or prescription drugs or when engaging in a financial transaction

Penalties are $25 on the first offense, $50 on the second offense, and $100 on the third offense. An officer enforcing the ordinance will give warnings before issuing a penalty.

“Ultimately the goal is voluntary compliance, and we will provide masks as part of that compliance. … Our officers can issue verbal and written warnings. The intent is not to punish,” said City Manager Andrea Arnold.

Mayor Pro Tem Tony Powers asked why masks are only required for children over 10 when the CDC recommends masks for children over 2, and also asked about the issue of probable cause when law enforcement officers are enforcing this ordinance. During Wednesday’s meetings, Powers had emphasized the importance of making sure such a mandate would not be used as a tool of overpolicing, especially against young people of color in Decatur.

As for the exception for children under 10: “We’re leaving that in the hands of the parents to make those decisions,” said Andrea Arnold, and added that the rule about age 10 was consistent with existing ordinances from other jurisdictions, like Savannah and Athens-Clarke County.

Commissioner Lesa Mayer asked how the ordinance may affect decisions made by the school board when school resumes.

“This ordinance does not apply to the city schools environment. It may fall under some parts if there’s a common space, the public lobby for example, but this is not going to dictate the decisions that the school will be making about mask use within their own facility,” said Arnold.

Agnes Scott College, for example, has decided to require masks on their campus, according to a public comment from Demetrice Williams, director of Special Events and Community Relations at Agnes Scott College.

MARTA has said they will not require masks on their public transportation, and City Manager Arnold clarified that the City of Decatur does not expect MARTA police to enforce this ordinance.

MARTA riders will be required to put on a mask if they enter a Decatur establishment.

“As long as they’re able to maintain social distancing, a mask will not be required” while someone is walking from the MARTA station to a local business, for example, said City Manager Arnold.

The City of Decatur is working with the police department and Dekalb County to protect vulnerable population of “homeless and transient people” in the downtown Decatur area. “We are working to find a way if there’s a portable testing option to help these folks get tested, and at the same time provide them with some public [health] education,” said Arnold.

Commissioners also questioned why houses of worship were exempt from the ordinance, although the use of face masks is still “highly recommended.”

Bryan Downs said he believes this ordinance is consistent with Governor Kemp in recommending face masks in places where social distancing is not possible. “What we don’t want to do is go beyond that,” said Downs. He highlighted that as of right now, science supports a theory of higher rate of transmission indoors than outdoors.

“If somebody is walking around in the outdoor business district, no, this ordinance does not apply,” said Bryan Downs. “I agree there’s an ambiguity,” he said, but cited the short amount of time in which the ordinance was written as a reason for the ambiguity.

“I also would encourage you to not necessarily legislate that until you have explored the other options … of educating somebody who is walking around in public in close conditions without wearing a mask,” said Downs.

Commissioner Dusenbury also expressed confusion at some of the language of the ordinance and said he would like to have a conversation about addressing certain outdoor spaces.

Commissioner Walsh said the ordinance doesn’t specify what people need to do in transitional periods, for example, walking from establishment to establishment, or walking from one’s car to an establishment. “I don’t think we’re prepared to legislate that behavior in this ordinance today … I don’t think we built in too many exceptions, exceptions that erode the actual ordinance, I think particularly given the lifestyle and high activity level of our community, being outdoors, walking, … I want to protect that outdoors section [of the ordinance].”

“I’d like to formally request that we make changes to the ordinance to make it more clear,” said Commissioner Mayer. “I wonder if there is a way that [the title of the ordinance] could be clarified, and recommended changing it to ‘public indoor spaces.'”

“If we were talking about taking people’s liberty away and putting them in jail, then yes, clarity would be important,” said Bryan Downs. “I think we need to stay focused on the [civil penalty] … with all due respect I think the five of you should not try to modify the document [today].”

“This is a very moving target, I don’t think we’re going to address every single issue on the first pass … we can always come back and tweak this,” said Mayor Pro Tem Tony Powers. “I think we’ve done what our constituents and what we have asked of city staff … People who are gonna do the right thing, do the right thing.”

“I am not comfortable making changes to a law on the fly,” said Mayor Garrett. “I would like to see us take this ordinance as is.”

Lesa Mayer moved to amend the ordinance and to remove exception (e)3. “I think that we need to be clear that this applies to indoor public spaces and not all public spaces. I don’t think this specifically is what the community is expecting or asked for … I just want to make sure we’re doing right by the community so that it can be enforced correctly.”

“I think the better approach is not to amend the ordinance, I think the better approach is for the city to put out a statement summarizing the ordinance,” said Attorney Downs. He expressed concern that changing the language to “indoor public spaces” would negate situations such as outdoor dining spaces and outdoor spaces at hardware stores or grocery stores.

Commissioner Mayer withdrew her request to amend the ordinance and moved to pass it, but said, “I would like to have it on the record that I am disappointed with this ordinance, it does not do enough to protect our community … but I think something is better than nothing.”

Mayor Garrett said signs conveying the ordinance would go up by Monday.

“I think [the ordinance] protects the most people in our city limits where they are the most at risk, and that’s a good place for us to start,” said Commissioner Walsh. “I am open to learning about how we can create safer spaces outdoors, but for today I appreciate that we could work together to this point between Wednesday and now.”

Walsh pointed out that the infection rate within the Decatur zip code had increased by 23% in a week as of July 5th, according to the Dekalb County Department of Public Health.